How have Central teams fared since the Olympic break?

"It's very important that we come out prepared to go, because the team that stumbles out of the break is probably going to miss the playoffs." -- Ray Whitney, pre-Olympic break

Who knew Ray Whitney would be predicting the post-Olympic break Nashville Predators when he made that statement? Before the Olympic break, Nashville was within four points of the last wild card seed in the Western Conference playoff picture. Now, they find themselves a full ten points behind and all but eliminated from the playoffs.

Dallas got off to a great start out of the gate, with a 4-2-0 record and a 66.7% points percentage gained. That's good enough to keep pace in the division, but the rest of the central has done pretty well for themselves also. Let's take a look.

The Blues find themselves atop the West, finally squeaking their way past the Anaheim Ducks. Four of their six games have been one-goal games with the Blues coming out on the better end of all of those games. They've been feasting on points from teams trailing behind them in the playoff picture -- and helping Dallas out in the process, taking down Phoenix, Minnesota and Nashville and keeping Minnesota to only one point earned. Their only loss so far was to the Ducks in a 1-0 affair that was a sneak peak at a potential Western Conference Finals matchup.

The Blackhawks have had a touch of inconsistency out of the break, losing one, winning one, losing one and then winning two in a row. Their wins have come against the Penguins (nothing to sneeze at), a lighting up of Columbus like a Christmas tree, and a surprisingly low-scoring bout with the Buffalo Sabres in a 2-1 victory. It's the Blackhawks, so they'll be fine, but I do like hearing that Patrick Kane and Tyler Seguin have the same number of points right now.

Colorado is creeping up on second place Chicago, sitting just three points back with a game in hand. They also have been doing favors for Dallas in beating Nashville and Phoenix. They've built enough clearance between themselves and Minnesota and Dallas to be assured a top three seed in the central division and now find themselves playing for seeding on their way to the playoffs.

If Winnipeg wants to gain ground on their five point deficit to Dallas, they'll need to do better than .500 hockey. Beating Phoenix and Nashville, who they're battling with, is fantastic, but they dropped opportunities to gain points against the east. They also are probably going to need to score more than three goals in a game to get some wins in such a high-flying division.

So about that stumbling out of the break thing....pretty sure this is what Lindy Ruff was talking about. Getting Pekka Rinne back was supposed to help, but this team just can't find the offense to win games, and that's going to bite them down the stretch. They've only scored 1.5 goals per game since the break and have a minus-39 goal differential. SportsClubStats.com has their playoff chances listed at 0.6%, which makes them all but mathematically eliminated in the playoff race: 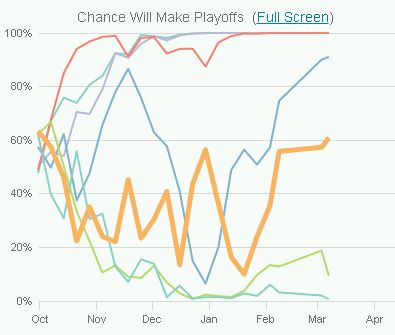 That orange line is Dallas' playoff chance over the course of the season. Beneath them are Winnipeg and Nashville respectively, with Minnesota's line the blue one that bottomed out the same time as Dallas was rising going into the new year. (Gosh that January was B-A-D.)