For Lindy, A Statistical Recap of Dallas at Phoenix

Share All sharing options for: For Lindy, A Statistical Recap of Dallas at Phoenix

The Stars knocked off the Coyotes 3-1 on the strength of a sweet empty net goal by Ryan Garbutt. I don't know what it says about the game or about myself that the most impressive part of the game was an empty netter, but here we are.

The Coyotes generated a healthy number of shots throughout the game at even strength, but the Stars generated significantly better scoring chances. The Fenwick chart below shows the shot advantage enjoyed by the Coyotes. 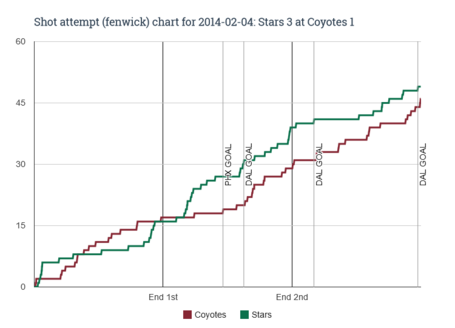 The Coyotes enjoyed a 55% Fenwick ratio on the night in their losing effort. As I mentioned though, the Stars drilled them on the scoring chance ledger.

The Stars generated 20 scoring chances in all man situations but only yielded 11 to the Coyotes. The Stars also outshot the Coyotes at even strength. The Coyotes Fenwick success was a good indicator that they were doing what they needed to do to be successful, but ultimately they didn't get enough pucks on net to make a difference.

The Stars most dominant line tonight was surprisingly the trio of Antoine Roussel, Ryan Garbutt, and Vernon Fiddler. Fiddler and Roussel were each on the ice for only one chance against. Garbutt was on the ice for two. All three players were 80% scoring chance players against Phoenix.

The Stars took care of business against a team with whom they are fighting for a playoff spot. Tomorrow night they take on the dominant former Pacific Division rival San Jose Sharks in one of their final games before we head into the Olympic freeze.