The Stars can leap-frog the Coyotes before the break, and get a step closer to their goal.

In the human experience we tend to look for natural milestones and boundary conditions as means/occasions for measuring and demarcation. The end of a month. The end of a semester. The end of a home stand.

The Olympic break, as is the case this year in the NHL.

So every coach, player, beat writer and blogger in the league will have it in their minds that this last gasp leading up to February 9th is an important, nay, vital stretch. For the Dallas Stars, and all teams who like to think they're on the bubble, or near it, this is doubly true.

In 2010 the Stars put together a 4-1-1 push before the Vancouver games- A stretch that perhaps prevented the trade of Marty Turco, prolonging a hope that would eventually fail on the final afternoon of the season. It also included two games over the Phoenix Coyotes. Both wins.

Duplicating that feat this time around, a win over Anaheim already in hand, also requires two wins over the Phoenix Coyotes. Tuesday, and Saturday.

Perhaps it's finally time, now that the calendar has turned to February, to take a peak at that most sinister of spring-time addictions, sportsclubstats.com... 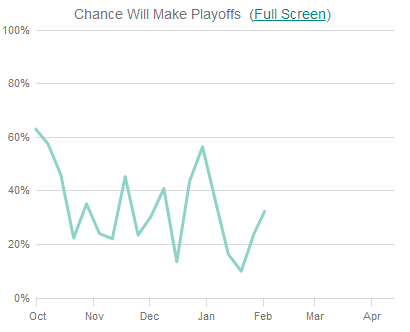 There it is. There are our emotions in graph form.

A roller-coaster. Searching for consistency. It's all hollow banality you've heard a hundred times before. But it IS the case. Those are apt, though cliched, phrases. It's right there to see. In relation to the rest of the West, of course.

They've been trending up now for a couple of weeks- Losses to Colorado and New Jersey included. Still trending up. If history is doomed to repeat itself that line might tick up close to that 50/50 mark again. What happens after that is the subject one Mr. Jim Nill must contemplate as three of his biggest cogs moving forward journey overseas to don jerseys that aren't green.

If they're in the East 59 points is four points out of sixth, and they'd have had a much easier road to travel on the way to this point. In the West they're three points away from eighth place Vancouver, losers of three in a row and seven of their last ten. There's a game in hand there to boot.

Minnesota isn't far off at just six points up, and the Stars have two games in hand there as well.

The pace has slowed since the West's absurd start against the East. Teams like Boston, Tampa Bay, Toronto (improbably and luckily), Montreal and New York have put up a fight. While The Canucks, Coyotes and Wild have faded a bit.

What once looked to be a 100-point pace or more has come back down to earth. Phoenix's 8th best points-percentage of .564 sets the bar at 92.5 points for the final wildcard spot in the West.

Which is why Dallas is still in the mix despite that atrocious first two weeks of January.

So the easy math says Lindy Ruff's boys must play .630 hockey the rest of the way to meet that mark, which could very well go up again. Vancouver isn't going to go on like this. Dave Tippett is going to stop the floundering of his Coyotes.

Given the chance to do substantial damage to a team directly in front of them in January, the Dallas Stars split a clumsy pair of games against the Wild, giving away two points while taking three for themselves. Inches in the right direction, sure. But what of a sweep?

Taking both against Phoenix this week, somehow, would put teams on notice heading into the break. With two full days to prepare before each (Tuesday, Saturday) there's no excuse to not put their best foot forward. The matchup back-to-back with the Sharks in the middle aside. You could give up that one for the other two.

Spending so much time on this blogging-gesticulation that is hoping, improbably, for playoffs, might be foolish. It's true. And a date with a power-house #1 seed is often mocked at the conclusion of such pursuits- But picture a date with, not the Chicago Blackhawks, but those same Anaheim Ducks. Could the Stars not at least give them a run for their money?