Is Jamie Benn Prepared to Lead the Dallas Stars to the 2014 NHL Playoffs?

The Dallas Stars captain continues to defy expectations; his next challenge will be the toughest yet.

Share All sharing options for: Is Jamie Benn Prepared to Lead the Dallas Stars to the 2014 NHL Playoffs?

In September of 2009, Jamie Benn was stepping onto the ice for the first training camp practice of his professional career with no promises that he would be on the NHL roster when the season began. Benn was coming off an underwhelming performance in the Traverse City prospects tournament, especially with the Dallas Stars GM proclaiming him to be NHL ready, and expectations were high for a young 20-year old winger with all the talent and size to be a gamechanging force for the Dallas Stars. There were no guarantees of a roster spot and he'd have to prove his worth, as there were doubts about his ability to make such a big jump from the Canada juniors to the NHL.

The boy-in-a-man's-body power forward with soft hands and staggering physical ability took the challenge head on and took advantage of a prime opportunity to stake his place on the Dallas Stars roster, and he's never looked back. Benn was consistently the best player on the ice during that training camp and in the preseason games and it quickly became clear why so many had been so excited about this fifth-round draft pick that seemingly came out of nowhere.

Jamie Benn has made a career out of proving his detractors wrong and overcoming low expectations. He didn't get as much exposure to scouts as some other players because of where he lived and the league he played in in British Columbia, and there were some universal concerns about his skating ability and how that would affect him at higher levels.

The NHL Season Resumes: Where the Dallas Stars Have Been and Where They're Going 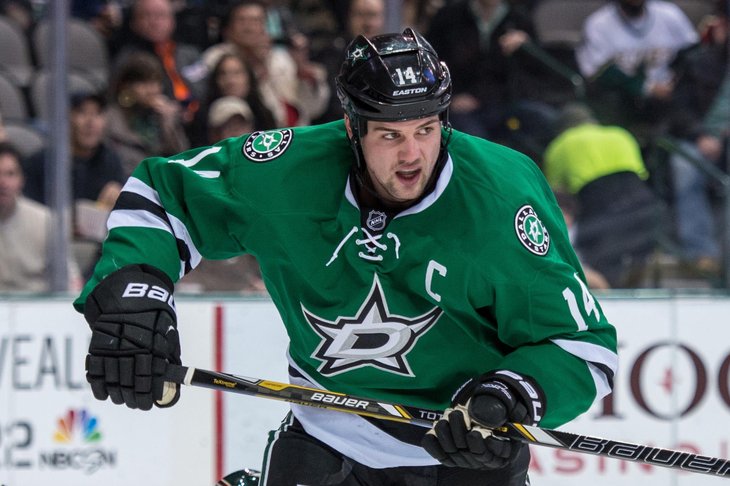 Put away the flags and get out the victory green. The Dallas Stars are coming back.

Dennis Holland is the scout that is credited with "discovering" Jamie Benn, and pushed for his selection in the 2007 NHL Draft. Benn fell all the way to the fifth round, and was considered just another name in the crowd at the time. Holland noted Benn's raw talent and potential and was impressed with the young player's ability to improve each time he played.

"That's one of the key things you look for, room for improvement. He was big for his age (6-2, 185 pounds), he could really handle the puck, read the game and he was dangerous offensively," Dallas Stars Assistant General Manager Les Jackson said of Benn. "As far as his skating, he was one of those guys who was a lot better when he had the puck than when he didn't - he seemed to be energized and showed flashes of high-end (skill) with it."

Since 2009, Jamie Benn has continued that trend of constant improvement and hard work; from an exciting rookie with explosive offensive skill, Benn became a dangerous two-way power forward that was just as good in the defensive zone as he was on offense. On a roster with Mike Modano, Jere Lehtinen, Brad Richards, Mike Ribeiro and James Neal -- it was Benn who was consistently the most exciting, the one who would bring the crowd to their feet when the puck touched his stick.

As disappointment led to drastic changes in the front office, coaching staff and on the roster itself, Jamie Benn more and more became the focal point of the team's direction. It was becoming clear that Benn had the potential to be the so-called "franchise player," and he was named as the team's number one center following the departure of Richards. While it became clear that Benn would work best at his natural position the time at center did help prove one thing: Benn was the player the Dallas Stars needed to be built around.

Four and half years after his NHL debut, Jamie Benn is now the captain of the Dallas Stars and still proving those who doubted him wrong. For many, Benn wasn't the type of player who should take over the captaincy -- he didn't have the "right" personality for the job, he was too soft spoken and robotic with the media. The changing of the guard in the front office gave Benn a new beginning and a fresh start and while he's still the same all-around great player Stars fans have seen since 2009 -- he's just a bit different now that the "C" is on his chest.

Benn is returning from the 2014 Sochi Olympics triumphant and a hero. Completely left off the Olympic camp roster for Team Canada, he forced his way onto the team and then forced his way up the lineup and into more playing time. He was the spark used to ignite those around him, and made the game-winning play in the decisive semi-final game against the United States.

Now, it's time to take that next step and once again prove everyone wrong. No one expected the Dallas Stars to have a chance at the playoffs this season, even with the additions in the offseason; there were too many questions, too many holes on defense and the Stars were playing in the toughest division in hockey. Yet with 24 games remaining the Stars hold onto sole possession of the final Wild Card spot and control their own fate down the stretch.

This is a familiar position for the Dallas Stars to be in, holding control of their playoff destiny the last three seasons before collapsing down the stretch. This is where Jamie Benn can do what others before him could not, to take this team by the reins and lead them head-on into the postseason. This is a team strife with extreme ups and downs this season but the potential for greatness is there, just below the surface.

We've seen in the past how Benn is capable of putting the Stars on his back; in 2011 the young winger nearly pulled the Stars into the postseason all by himself. The expectations of making it to the playoffs this season most definitely weigh upon his thoughts, and he likely feels that burden directly on his shoulders. This is a proud fanbase with high expectations of a proud franchise, and now Benn is expected to lead the Stars into a new and successful era.

The playoffs were always a dream and never a true expectation, even as we sit here with just 24 games remaining and the Stars in a playoff spot. The path forward will be the hardest yet for the Dallas Stars, a dangerous schedule for a team that has been inconsistent. Where others have failed and where the Stars are expected to fail once more, Benn has the chance to once again defy expectations.

Can Jamie Benn lead the Stars to the playoffs? The shortcomings of the past are still fresh and painful, but this is a different team and a different Jamie Benn. He's the leader no one expected him to become. He's matured, his game has become more well-rounded and back at his natural wing position and playing alongside Tyler Seguin, he's become the game-changing and dominant force the Stars hoped he could become -- even way back in the fall of 2009.