The NHL Season Resumes: Where the Dallas Stars Have Been and Where They're Going

Put away the flags and get out the victory green. The Dallas Stars are coming back.

Share All sharing options for: The NHL Season Resumes: Where the Dallas Stars Have Been and Where They're Going

The 2014 Winter Olympic games in Sochi have been put to bed. Kari Lehtonen and Jamie Benn return with medals. Russia failed at home quite spectacularly. Canada proved to everyone that it's good at hockey, so that was pretty shocking. People watched a lot of figure skating.

Finally it's time to return to victory green.

The Dallas Stars (remember them?) have occupied a playoff spot in the West for the last 16 days. They returned to practice Wednesday. They return to game action on Thursday at home against the Carolina Hurricanes. Good seats remain. The trade deadline looms large on March 5th, just nine rumor-filled days away. Dallas has a 24 game sprint (12 home, 12 away) to the finish on April 13th in Phoenix.

It is, in short, an exciting time. As much for myself as a refresher than anything else, here's a brief reset of the season so far and what's to come as I try to get all of the proverbial Olympic sand out of the bathing suit of my mind...

All over the gosh-darn map... (via sportsclubstats.com) 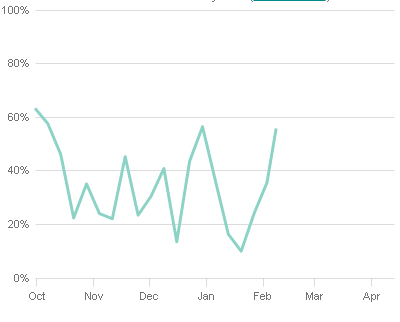 The fluctuations in their success-level were small at first as they tried to find their way, and then the swings got bigger. Much bigger. The ghastly 1-8-1 stretch to start 2014 saw them pushed to the brink and written off by most. A 6-1-2 stretch ahead of the Olympic break saved the season. To this point.

Through it all they've produced goals at the 12th highest rate, allowed them at the 19th worst, scored on the power play at a better rate than only seven other teams and killed penalties better than only another ten.

Eighth place. Sweet, sweet eighth place, ahead of the Coyotes on only a tie-breaker, and the Canucks by a single point.

It's precarious, to say the least.

They've won 14 games at home, which is quite poor, comparatively. They've won 13 on the road, which is worthy of 8th of 14. Not too bad. Their goal differential is even through 58 games. They've been a reasonably good possession team this season, though it doesn't always translate to results.

They have fewer wins than does 11th place Winnipeg. They've been downright bad in overtimes. They've lost more shootouts than they've won.

They're where they want to be, and they're not.

Who They're Up Against:

The Minnesota Wild, the Phoenix Coyotes, and the Vancouver Canucks.

It's as simple as that. The Los Angeles Kings are tantalizingly close but they sit third in the Pacific and that's an automatic playoff bid, whether the Stars catch them or not, likely.

No, it's Phoenix first and foremost. There's your scoreboard rooting interest number-one. Then there are a couple of assumptions that follow about the other two, one of which must be debunked for the Stars to experience an 83rd game this season.

The first is that the Canucks are the Canucks. They're going to rise. They've lost seven in a row and eight of their last ten, sure, but can that really last? That business with their coach has passed and now they'll rally around their elite talent and be sitting pretty by mid March, right?

The second assumption most will make is that the Wild cannot be caught by the Stars. Dallas is five points back with a game in hand, so the math does make that fairly difficult.

Which is more likely to occur? These first two weeks will tell us a lot. Maybe everything.

After all, it was the Stars that ended this conversation coming out of the 2010 Olympic break, not their competition. With losses. Many of them. Will history repeat itself?

They have their opportunity sitting in front of them. They play 10 of their next 16 at home.

They just, uh, haven't been particularly good at home this season, so whether or not that perceived advantage will actually assist is debatable.

A two-game stretch against the Canucks and Wild, both at home next week, should be treated as nothing less than a veritable pair of Super Bowls. Call 214-GO-STARS or visit Ticketmaster.com right now. Go do it.

The Flames, the Jets twice, the Senators, the Hurricanes and the Sabres highlight the opportunity. Matchups with the Blues, Penguins, Blackhawks and Predators mark the possible stumbles. Then again, this team has excelled where it should stumble and stumbled where it should have taken advantage of opportunity. Aren't sports fun?

So it's a mixed bag for a team that's shown excellence, futility, and everything in between this season.

It's going to be a bumpy ride.