The quarterfinal bracket is set for Wednesday in Sochi.

The bracket for the men's hockey quarterfinals at the 2014 Winter Olympic Games in Sochi, Russia has been set. Team USA will see Jaromir Jagr and his Czech Republic squad while rival Canada will take on Latvia Wednesday. 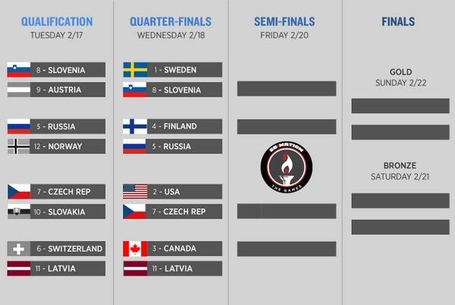 Finland must deal with Russia in the most unfavorable turn for an automatic quarterfinal qualifier, but the United States' task with an NHL caliber roster full of Czech's isn't far behind.

After suffering losses to Sweden and Switzerland in group play, the Czech Republic finally found its offensive game, pouring it on to the tune of a 4-0 lead on Jonas Hiller's stylings in net. Score effects and a big lead being what they are, they then let Slovakia claw their way back into the game with three straight before shutting the door with an empty net goal and a 5-3 final score.

Ondrej Pavelec's play was universally praised on Twitter today for two hours, then panned for another as the Slovaks got back in it. How he'll be "back-to-back" tomorrow will be a subject of great interest.

Funny how "back-to-back" isn't used as an excuse in a tournament setting.

The Swiss can't score, everyone said. They've only given up two goals all tournament long, everyone said. Something probably had to give, save another 1-0 win Tuesday, and it did. They allowed three in the loss.

Latvia went up 2-0 early in the first period but things got interesting in the second when Martin Pluss cut the lead in half. They couldn't do it again, though, and Latvia added an empty netter to seal their fate.

Canada was busy worrying about how they were going to score against the stingy, stingy, Swiss. Now, many will use Latvia as an even bigger excuse to look forward to a potential meeting with the United States on Friday, and that will probably be the case, but give Latvia their due. They pushed Czech hard in group play and had Sweden sweating out a 4-3 lead on Sunday. They'll leave it all out there Wednesday, but will they be able to keep it close enough to matter?

Russia was nervous, the entire country, I mean, when the home team failed to get on the board in period one, but they pulled away with two goals in the second and two more in the third for a 4-0 win.

So don't count them out.

Valeri Nichushkin played just 3:16 in this game, including barely at all in the second period and not at all in the third, in what basically amounts to a benching. He was reportedly visibly perturbed on the bench.

Russia will now try on Finland in what might amount to a staring contest.

Slovenia already had their first ever Olympic win at their first ever games, and now they're going to the quarterfinals thanks to a 4-0 walloping of Austria in the opening playoff round today.

Anze Kopitar scored, and some other Slovenians probably did, too. Austria was out-shot 35-30 on the afternoon and depart with their lone win over Norway in group play, their first since 2002.

Slovenia will now face Sweden and their fearsome power play tomorrow in the quarters.