T.J. Oshie is a true patriot.

I do not regret my decision to get up early on Saturday to watch this game.

Team USA defeated the Russians in the shootout 3-2 after an epic 16 shot shootout. T.J. Oshie, you are the man.

This is one of the more enjoyable hockey games I have ever watched. Both teams put on a show. It was even enjoyable despite the Dustin Brown Clown Shoes Experience.

The Dustin Brown Show was worth the price of admission if you are Russian or just generally enjoy the misery and/or suffering of Americans. The 2nd worst forward on the American roster somehow was in the middle of several significant events. In the second period Brown took a run at Pavel Datsyuk. Alex Radulov then took a run at Brown. Radulov got a penalty which led to the Cam Fowler powerplay goal.

In the third period Russia redefined irony. An unidentified Russian dove in front of Brown. Yes, a Russian went straight Dustin Brown in front of Dustin Brown. The broadcast team missed the irony, but Twitter didn't.

Later, Dustin Brown turned the puck over in the neutral zone. On the same shift he then took a stupid penalty. Brown was involved in way too many critical plays against a team employing Datsyuk, Alex Ovechkin, Evgeni Malkin, Ilya Kovalchuk, Vladimir Tarasenko, Alex Radulov, Val Nichushkin, and any number of other talented Russians I'm forgetting.

But enough of Brown. Patrick Kane set up a wonderful goal off the stick of Joe Pavelski on the powerplay to put the US up 2-1 in the third period. Datsyuk later scored to tie the game up on the powerplay. Interestingly enough, three of the four goals in this game were on the powerplay. Both American goals, and the second Russian goal were with the extra man. Pro tip: don't take penalties in the Olympics.

The game was pretty much an even match up when the Americans decided to attack. The game was unfortunately almost decided with about four minutes to go in regulation by a shot from the point off the stick of Fedor Tyutin. At first glance it looked like the shot was deflected in off of a high stick, but upon closer inspection no contact was made.

....but, the net was half an inch off of it's moorings. The goal was waved off. The game continued, and would go to overtime.

In overtime Kane had two chances to keep this game out of the shootout. He was stoned by Sergei Bobrovsky on a breakaway from the red line. With only 30 seconds remaining in the overtime period Kane had another chance to end the game in tight, but just missed. The Russians came close off a crazy bounce with a second left, but alas the shootout came.

T.J. Oshie: Oshie starts things off with a goal.

Pavelski: A lot of stick handling, but no goal.

Kovalchuk: Ilya tied the shootout up to send us to extras.

In international competition teams are allowed to reuse skaters over and over. America just felt the T.J. Oshie Experience.

Oshie: Oshie shot the puck at the moon after beating Bobrovsky.

Datsyuk: Datsyuk scores to put the Russians on top.

Oshie: Oshie keeps up with the Russians and ties it.

Oshie: Oshie once again ties it up.

Oshie: Oshie is unable to win it.

Oshie: Oshie beats Bobrovsky to win the game the the US of A.

Oshie beat Bobrovsky on just about every attempt he took. When asked if he watched Jonathan Toews for inspiration after the game Oshie said "He's Canadian so I don't watch him too much." Oshie is now legend.

The Americans play again tomorrow, but this win is going to be savored for today. What an excellent game. 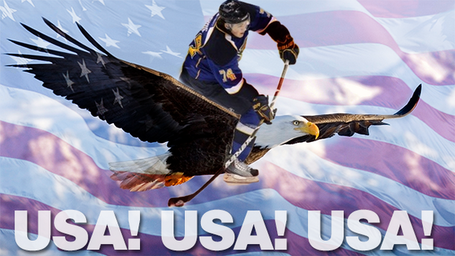