All this Olympic talk is fun, but I just can't help but daydream...

Share All sharing options for: Looking at Dallas Stars' Possible Path to an NHL Playoff Return

The Olympics are great. Better now that hockey is getting started. Take that, Slovakia, as team USA pounds them in their opening game.

Yet still my little sports heart turns to the NHL more often than not as I ponder which players will get hurt and which teams will suffer poor starts due to so many members traveling, and whether Val Nichushkin will revert to older habits after seeing success (a goal already) on that big old ice surface he used to call home.

Video of the goal coming when we can get it.

For now consider the following... 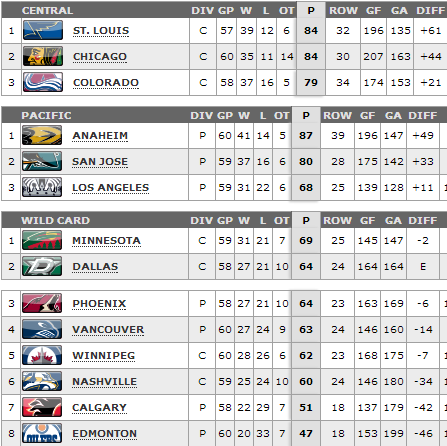 Up to this point we've discussed the playoff race purely in terms of points percentage and "8th" in the West. It's time to start looking at it with the more appropriate terminology, which is to say that the Dallas Stars currently sit in the Western Conference's second wild card spot.

If you obsess about these kinds of things, and I know you do, you've had an eye on the Los Angeles Kings as they've done some plummeting in recent weeks, but the funny thing is that it really doesn't matter. There will be three teams in the Pacific that get automatic playoff bids in better position than can the Stars, regardless of whether or not the Stars rise above the point level that third Pacific team amasses.

It's possible, if the Coyotes, Kings and Canucks (unlikely, but possible) continue their group-slide that the Stars could have, let's say, 72 points, while the greatest of that group has 71. They'd still be a lock, and the Stars would still likely be in "the last spot" because of the strength of the Central ahead of them.

Which is not to say that you shouldn't root against the Kings. They're the worst, and the more options Dallas has as far as teams to catch, the better.

The only way to feel even close to safe is to catch Minnesota. Colorado is just too far ahead.

Which would be... familiar. Though oddly so.

John Buccigross of ESPN says he likes the Stars to make the postseason:

@Buccigross: East: Boston, Tampa Bay, Toronto, Montreal, Pittsburgh, Philadelphia and the Rangers are in. I think it comes down to Detroit or Columbus, and I will take Columbus. West: St. Louis, Chicago, Colorado, Anaheim, San Jose, Minnesota and Los Angeles are in. Then it's Phoenix or Dallas for a coin flip. I will take Dallas.

That he doesn't even mention Vancouver is probably the newsier item. You know they're going to come roaring back.