Winners last season of the Battle of California, and thus the Pacific Division by default, the Ducks spent the offseason helping the Canucks with their rebuild and praising youth and cheapness in goaltending. Call it a strong offseason.

Everybody knows that Jim Nill and the Dallas Stars have already won the 2014 offseason. But that doesn't mean that the rest of the Western Conference spent the summer sitting on their hands. Except Winnipeg, who did exactly that. Over the past month and a half we've looked at the true enemies of the Dallas Stars... the members of Conference III. However, in a spirit of paranoia, one must admit that the Stars' enemies are not just confined to the Central Division. No, they're everywhere. And so we shift our gaze westwards, to the revamped, downgraded, but now more appropriately named former home of the Stars: the Pacific Division. We began with Rebuild 3.0 over in Edmonton, then moved on to Alberta's other heroes, the Calgary Flames, and rounded out the Canadian contingent with a look at the Vancouver Canucks. Following that we moved across international borders, to where the Arizona Coyotes hover on the brink of relevance, and then we entered the great state of California, where all of the teams that matter in the Pacific Division reside. We started with regular season underachievers, postseason overachievers, the Los Angeles Kings, and then moved on to perennial postseason whipping boys, the San Jose Sharks. And here we finally come to it, the conclusion of this series. That team that we all love to hate, even before they eliminated our beloved Stars in the first round of last season's playoffs... the Anaheim Ducks.

You know how it's much harder to get motivated to hate the teams in the Pacific Division than it is the Central? For one, nearly half of the Pacific teams are Canadian and thus try real hard but without really accomplishing anything. It's kind of endearing. Then there's that other team that plays in Arizona but will be moving to Seattle soon. Their fans deserve some good times before hockey leaves them forever. And of course, you can't really hate the Sharks, they've got it bad enough, and LA, well, yeah, I guess it's easy enough to hate LA. But it's nothing compared to the ease of hating Corey Perry Anaheim.

Hating them is easy. But what we all really desire is the chance to mercilessly taunt them as they struggle through a trying season. Is that going to happen? Probably not. That's not gonna keep me from hoping though.

So what did the Ducks do this offseason that will change anything? Well. I'm glad you asked. Let me tell you.

First off, after deciding during the playoffs that they were over Jonas Hiller they went ahead and offloaded him this offseason. Leaving them with a pair of goalies in Frederik Andersen and John Gibson with a combined 42 games of NHL experience. Gutsy. Now, both of those goalies have performed well at the NHL level, but if you listen closely you'll hear fancy statisticians everywhere screaming 'small sample size!' and then throwing the numbers out the window.

The Ducks also lost Stephane Robidas, who I'm pretty sure played at least two games for them last season. Then they lost Mathieu Perreault to free agency, Nick Bonino and Luca Sbisa parted ways in the Ryan Kesler trade, and the big one, the retirement of a Finnish legend, Saku Koivu.

There might have been somebody else who retired, but I'm not paid enough to keep up with everything.

Who's arriving then to replace all these holes? Well, there's Dany Heatley, newly arrived from Minnesota, who might, but probably won't, be worth the $1 million contract he's been given. Then again, a million dollars is chump change these days.

Most importantly though, the Ducks traded for Ryan Kesler this offseason. Now, maybe I've been reading too many Canucks blogs on the subject, but I fall in the camp that says Ryan Kesler isn't worth the hype. He's good, sure. But is he really going to be the missing piece the Ducks needed? And shh... don't tell anyone, but he might be declining...

But what do I know? There's two sides to every story. Which is why our favorite Anaheim blogger is here to give the SoCal perspective on things. Earl Sleek, formerly of Battle of California fame. My questions, his answers (and cartoons):

1) Ryan Kesler was one of the biggest trade pieces on the market this past summer (albeit, only for Anaheim or Chicago) and the Ducks managed to land him. Great. Good for you guys. Only I wonder about the cost. Nick Bonino, the primary piece on the Ducks side actually had more points last season than Kesler, at the same position, in the same number of games, with fewer minutes, and is four years younger to boot. But then, Anaheim also threw in multiple other pieces. How did the Canucks go from having a disgruntled player demanding a trade, to fleecing the Ducks? Or are Kesler's 'two-way skills' exactly what's needed in Anaheim?

I should just say this plainly: Anaheim did not get fleeced in this deal. [Ed. note: Ok, so maybe 'fleeced' was coming on a bit strong...] Vancouver just recovered what assets it could. You're right in that it's not a terrible return for the Canucks - Nick Bonino is a legitimate NHLer with a decently cheap salary for the next three seasons. Luca Sbisa on some nights is an NHLer, too, and though they couldn't pry away Anaheim's tenth overall pick from Ottawa, the Canucks did get a first round pick as well.

But let's be real, here. Bonino got his points last season in extremely sheltered minutes, including top-power-play-unit time. At even strength, Koivu or Getzlaf handled any opponent lines worth a damn. Shedding Luca Sbisa is a favor for Anaheim, not a cost - he has an NHL salary now but would sit about ninth-deep on Anaheim's blueline. Only if Ryan Garbutt killed Ducks players at the same rate as last playoffs would Sbisa even make a prolonged appearance [Ed. note: Here's hoping]. And the 24th wouldn't help the Ducks out any over the next two seasons like Kesler will.

Ryan Kesler is a damn good player in this league, under contract the next two seasons for a decently under-priced amount. You shouldn't hesitate to give some smaller pieces away for a prize player like that - I guess see your own Spezza trade for evidence of that. By the way, I do like the Ducks' trade for Kesler more than the Stars' trade for Spezza, cost-wise, in that Anaheim gets two affordable seasons of the player while Dallas will get one.

2) Dany Heatley is in town for a year. I'm not sure that I would be excited about this. Does he get to play on a line with Corey Perry and Ryan Getzlaf and somehow rebound from his slow and steady decline? Or does he get buried in a depth role?

Bruce Boudreau is still Anaheim's head coach, so no matter how he performs Heatley should expect to move lines quite often, though he will start the season on that top line. I don't know why I shouldn't be excited about Heatley in Anaheim. It's virtually no cost - $1M, 1 year, no bonuses - and if I think about the primary guy who played the role last season, Dustin Penner, I don't really know of one thing that Heatley does flat-out worse than Penner, other than his Twitter game and unutilized size. Plus it's the same contract that the Ducks once gave Teemu Selanne to return to Anaheim, and that turned out just fine. :)

Nah, the bigger concern in Anaheim's fanbase is with the other UFA signing from Minnesota. Other than a pretty funny name, the contributions Clayton Stoner will bring to the Ducks are kind of arguable (though I haven't seen him play under Boudreau yet, so I'm not taking a side). Here's a cartoon about Anaheim's offseason addiction to Minnesota Wild UFAs: 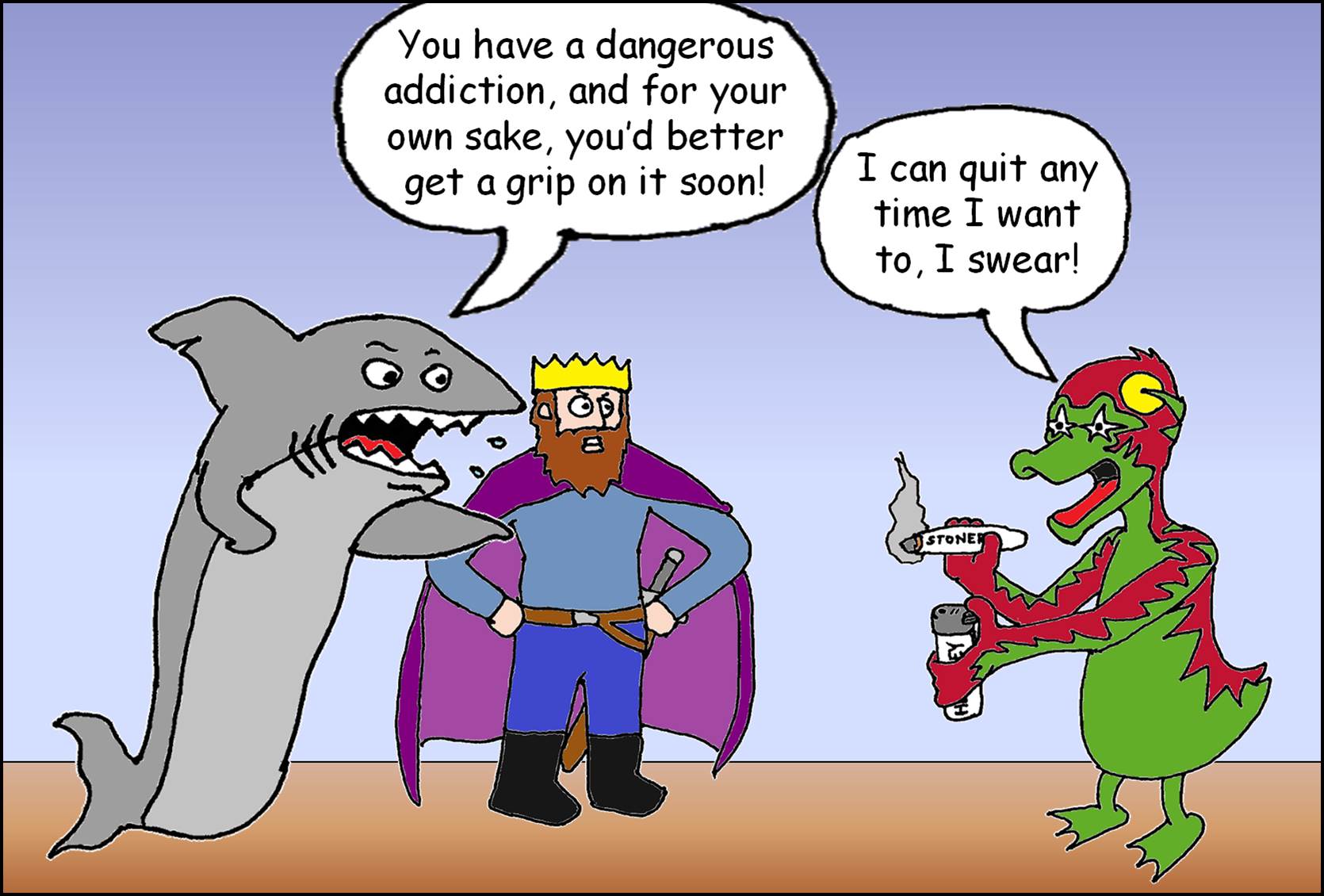 3) Goaltending. There was talk this offseason of John Gibson possibly making a case as the starting goaltender (which would be great, since he's the best of a paltry haul on my auto-drafted fantasy team) over Frederik Andersen, with Jason LaBarbera as the veteran insurance policy. Following a poor preseason though from Gibson, how do you see the goaltending situation shaking out during the season? And how concerned are you?

I guess my gut says Andersen is better, but that may just be in that I've seen him for (a few months) longer than Gibson. But who knows? These are both kids that have combined for only 42 career regular season + playoff games in net, so neither one has any lengthy NHL pedigree to lean on.

But I'm not that concerned, I guess, especially about preseason results with silly rosters. It's not like the Ducks are banking on only one of these kids to be good - if either one does as well as he did last season, the Ducks win on a gamble of having the cheapest netminding in the league. If all options falter, there's money to spend on a fix.

4) Care to eulogize Teemu Selanne? Or comment on his auto-biography?

I can't eulogize Teemu, because that would take me months to properly pen. He's the president and emperor of Anaheim, though, and as Ducks fans we'll always owe him for the privilege of watching his hall of fame career and winning personality almost all in an Anaheim uniform.

As for his Boudreau quotes, I'll give a very strong "oh, whatever". Teemu cares a lot and probably wrote a biography way too soon after being eliminated. He's still the best, and I'll be attending Teemu night this season with unaltered enthusiasm.

5) Tell us about the youth in Anaheim. Besides the frightening inexperience in goal, what other players are poised to make a splash in the big leagues this season? What rookie will I have actually heard of a couple months into the season?

I'm kind of bad at the rules of who's technically a rookie or not (possibly nobody on this list except Gibson), but young guys I expect to contribute this season include John Gibson, Cam Fowler, Hampus Lindholm, Sami Vatanen, Jakob Silfverberg, Kyle Palmieri, Rickard Rakell, Devante Smith-Pelly, and Emerson Etem.

Now certainly some of these guys have spent years in this league - Fowler especially - but they're all 23 or younger, which does mean a lot of youth will be in Anaheim's nightly lineup. That may prove problematic, but there are solutions available, including Anaheim's yet-to-hit-the-NHL prospects (either as players or trade assets). I'm pretty bad at naming that list, but I do know publications keeps ranking the Ducks' prospects among the best in the league.

So yeah, Anaheim will be utilizing some of its talented youth this season, some in the lineup and maybe some as trade pieces. And I guess the rookie you'll have heard about will be Gibson.

6) And lastly, top of the Pacific Division last season and a lucky first-round series win over the Stars. Predictions this time around?

Oh, I don't know. Last season the Pacific Division was strongly dominated by the Battle of California, and even if some of the non-Californian members improve, I guess it's still largely a three-horse race. So, Ducks should be a playoff team, I guess, and beyond that, the only prediction I'll make is that this season probably will end less painfully than last season. Damn that game seven debacle.

But I will admit: You may be right that the Ducks lucked out in round one last spring, considering Boudreau's dismal career 1-5 record in game sevens. So thanks once again for that epic game six collapse, Stars!