With everyone now under contract for the season, the Dallas Stars have made all their cuts to get down to the 23 man roster for opening night. We look at who's up and what the salary cap picture looks like now.

The Dallas Stars became one of the first teams to get their roster down to the 23 man limit in preparation for opening night yesterday.

Well, it will be 23 after the injury to Sergei Gonchar. He's likely to start the season on injured reserve, as he's expected to miss 3-5 weeks with a fractured foot sustained in Tuesday's pre-season game.

Here's everyone that is up, with their cap hits through the seasons (numbers courtesy of CapGeek.com): 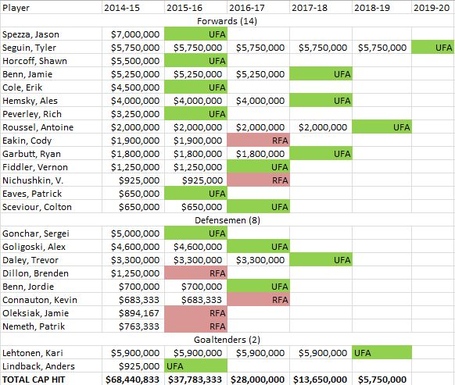 With Gonchar injured, young defensemen Patrik Nemeth and Jamie Oleksiak will join what is shaping up to be an awfully young (experience-wise) blueline. It was the one area where most figured a young guy would push for a spot, as the Stars have a plethora of near-NHL ready guys in the AHL.

The experience of the opening night's seven defensemen will be as follows, bolstered by the recent re-signing of Brenden Dillon -- the third most experienced healthy blueliner now:

The forward group doesn't see any of the young guys from Cedar Park crack the lineup after the signing of Cody Eakin earlier this week. With Rich Peverley not expected to be ready to return to the ice at the beginning of the season, the 13 healthy forwards appear to be shaking out much like we expected.

The lower than anticipated cap hits of Dillon and Eakin's deals helped to keep Dallas under the cap, with just about $600,000 in cap space with the current roster construction. That number is without any relief from putting someone on long-term injured reserve (like Gonchar to start the season, and Peverley for an indeterminable amount of time), which will give them added flexibility throughout the season to ensure they can manage call-ups when injuries occur.

When Peverley is healthy and ready to be activated this season, the Stars may run into a cap problem at that point and would have to look to move a contract of equal or greater value in cap hit. (And yes, I said "when" not "if" because I believe in the power of positive thinking.)