Observations on a game the Stars had to win, which they did in rather impressive fashion.

You could call the second period in Tuesday night's bout against the Columbus Blue Jackets a "gut check moment" for the Dallas Stars, in just the third game of the season. Once again the Stars had come out red-hot only to be outworked into giving up a two-goal lead, the same as had happened against Chicago; this time, the Stars answered the bell and used a strong third period to skate away with a resounding 4-2 victory.

The spark for that wake up call seemed to come almost solely in the form of Jamie Benn, the captain of the team who for the past five years has shown the ability to - when his team needs it the most - step up and almost dominate a game and seemingly will his team to victory. In the past, Benn would have been on his lonesome in this quest; now Tyler Seguin is by his side and both stepped up their games rather spectacularly exactly when their team needed it the most. 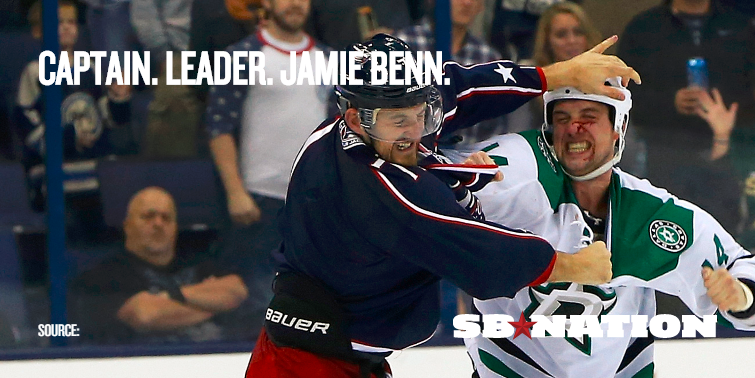 "That was an awesome display," said Stars coach Lindy Ruff. "Both guys played well. [Seguin] had a heck of a game and Benner the same thing."

Before the game, Daryl Reaugh interviewed Benn during warm ups, where the Stars captain stated how important it was for his team to get off to a strong start against Columbus. This came after Benn himself stated he was "the worst player on the ice" in a disappointing loss to Nashville on Saturday night, another sign of how he's grown into one heck of a leader both on and off the ice.

It's one thing to say what needs to be said, but Benn has the ability to immediately back that up with his play on the ice. It's rare that a player gets a hat trick but isn't the best player on his team in the game, but that was certainly the case on Tuesday night.

Benn set up Seguin just 3:36 into the game with a brilliant pass across the slot, and then used a herculean effort to force a turnover and then lift a vintage Jamie Benn wrister over Sergei Bobrovsky's shoulder to give the Stars a two-goal lead just over six minutes into the game.

It was a statement.

Later, the Stars had given up all of the momentum - as well as the lead - in the second period, getting outshot 16-9 and letting a parade to the penalty box sap all of the speed from their game. Benn stepped up in a spirited bout with Nick Foligno, sending a message to his team that was quickly answered in the third period.

"Sometimes it is those uncharacteristic things that spur your team on," said Ruff. "You are sitting on the bench and you've just seen your captain go at it, you've seen him put up some offensive numbers, so it is time for you to do your part."

"Seguin driving the net on the third goal and tipping it, that was a big play," Ruff continued. "It started with us getting pucks to the net, we did a lot better job of it. They had a pretty big push in the third, we got a couple of huge saves out of Lehtonen on some mistakes. Then I thought we had a pretty good push ourselves."

Here's the best part of Benn's performance against the Blue Jackets: his post-game scrum with the media. So intense on the ice, immediately back to his humble, quiet public self afterward. Check it out.

This is why Benn is consistently considered to be underrated. He just doesn't care about flash and pomp off the ice.

Unless it's a Dude Perfect video.

Despite all the praise we're heaping on the team after that third period, there was still a lot to be concerned about after another lead was squandered. The second period against Columbus, certainly aided by the penalty issues, was another in which the team was out-worked considerably.

"We want a killer instinct, so we are disappointed with letting them back in the game," said Seguin. "Our discipline has to be better down the road. We got to find a way to stop letting teams back in, that killer instinct. But I think we stepped up in the third. It's a great feeling to the get win, especially on the road. They're a tough team and they've had a good start. They've got some big boys over there that compete hard. We worked hard tonight."

Seguin is right in that this wasn't a win over the same old pushover Blue Jackets. Columbus is a very good, deep team that is playing Western Conference hockey in the East, and it was a great test for the Stars on the road to be able to change the direction of the game after that lull in the second period.

"I think it's even bigger being on the road," said Seguin. "I think we're going to put this one behind us pretty quickly, but it was good to get the first win. They're a tough team, obviously they've had a good start. They're some big boys, they compete hard -- but we worked hard tonight."

Once again, it was the Stars dynamic duo leading the way. It was a great sign after the first two games, especially after Benn challenged both himself and the team after that Predators loss.

"[Benn] kind of asked me after that last game if we were panicking," said Seguin. "We definitely weren't, we just needed to do better in certain areas. Our compete level needed to rise and I thought we had a good compete level from the drop of the puck and it was a pretty consistent game for us, and we'll move on."

Some other thoughts on the game:

** In the first period, the Stars were really starting to get their game going with all four lines rolling consistently over the boards, and pushing the play quickly up ice. The Stars grossly out-shot and out-possessed the Blue Jackets to start the game, all fueled by the two-goal lead that Benn and Seguin had given them. It was a great sign of what this team can really be when firing on all cylinders, especially when Ruff can give his fourth line significant minutes, and the Stars used the same method to protect the lead in the third.

** It wasn't all good -- a sign of how one mistake can become so very costly for this team came midway through the first period. Connauton possessed the puck behind his net and immediately the rest of the Stars turned and burned their way up the ice. However, Connauton's pass up the boards to the left wing (a staple of the Stars transition game) was picked off, and the Blue Jackets ended up with a one-on-Lehtonen chance in front of the net.

** Speaking of which, Lehtonen allowed another rather soft goal from distance when Johansen's wrister snuck under his blocker. After that, however, the Stars netminder was rather stout. In the third period, before the Stars had taken the lead, Lehtonen made a few rather spectacular saves - none moreso than a breakaway save on Cam Atkinson early in the final frame. Those are the saves his team needs him to make, and Lehtonen came through on Tuesday. It was a good sign for Lehtonen and for the Stars, especially with the Penguins coming up on Thursday.

** Want to know how to get the Stars off their game? Get them into penalty trouble. In the second period, the Stars top four offensive players - Benn, Seguin, Spezza and Hemsky - were completely taken out of the game because, other than Benn, they don't play on the penalty kill. Spezza and Hemsky played just 14 minutes in the game, and were rather quiet throughout. That's the advantage of having two good lines, though, as Benn and Seguin made up for it.

** I wouldn't be surprised to see Curtis McKenzie on that second line in practice today. We'll see. I think he's the type of player those two need right now.

** Finally, Cody Eakin was out there with Benn and Seguin for the entire final minute of the game. They worked well together, both in the offensive zone and then in the defensive zone when Columbus made a late charge. After an icing, the Stars worked hard to get the puck back and quickly moved down the ice to seal the game with an empty net goal.