For Lindy, A Statistical Recap of Colorado at Dallas

Share All sharing options for: For Lindy, A Statistical Recap of Colorado at Dallas

The Dallas Stars continued their run of strong play tonight, but came up short against the Avalanche. Several players referenced the Avalanche luck. Lindy Ruff referenced the strong play of Avs goalie Semyon Varlamov. Both apply equally. The Stars began dominating this game as the first period slid into the second and never really looked back. 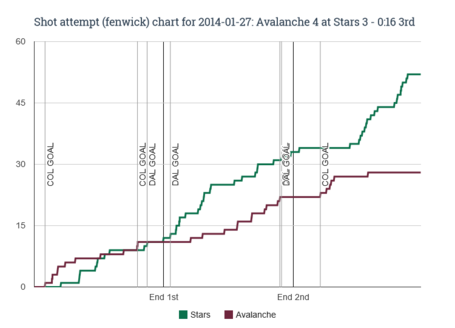 The Avs hung on for dear life in the second half of the game. You can noticeably see that the Avs flat-lined somewhere early in the third. They attempted just a handful of shots after the early minutes of the period. As they usually do, the scoring chances showed this relationship beyond a shadow of a doubt

The Stars created 24 total chances in all man advantages. 73% of all chances generated in the game were off of the sticks of Stars players. There is no meaningful stat you can pull from this game to reasonably suggest that the Avalanche deserved to win this game.

Individual props should go to Jamie Benn, Brenden Dillon, and Jordie Benn. Jamie was the Stars most successful forward in terms of scoring chances with a +6 with him on the ice. It's worth noting that five of those chances were off of his stick. He was incredible tonight.

Dillon and Jordie were the Stars most successful defensemen. Dillon was on the ice for eight chances for at even strength and none against. Jordie was up nine and down one.

I don't know about you, but I vote that if the Stars are going to lose any more games that they come via this fashion. The Stars once again showed what they are capable of doing when they play their game. As much as it stings it was sure fun to watch.