For Lindy, A Statistical Recap of Pittsburgh at Dallas

That's the best the Eastern Conference has to offer?

Share All sharing options for: For Lindy, A Statistical Recap of Pittsburgh at Dallas

The best team in the Eastern Conference skated into Dallas, and the Stars were not impressed. Dallas drilled the Pittsburgh Penguins 3-0 in a game that wasn't even close. The Fenwick chart below shows the wide gap in shot attempts that the Stars opened up starting late in the first period and carrying over until the third. 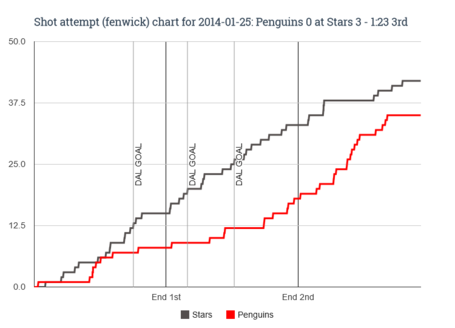 The Stars were aggressive from the get go, once again emphasizing how they need to play to be successful. The Stars formula lately is basically reversing the whip. The exact formula teams used to frustrate the Stars is what the Stars are doing to win games. Puck pressure, quick decisions, and crisp passing carried the day.

The Stars outchanced the Penguins 14-6 at even strength. If you include special teams the Stars had a 20-9 edge. As the game wore on score effects kicked in to bring the Corsi and shot totals closer, but the Penguins weren't really generating many scoring chances.

As a further example of the Stars dominance, when the game was close they had a 20-5 Corsi advantage. Sidney Crosby noted that the Stars played exactly the way the Penguins expected. The lackluster resistance Pittsburgh put up suggests that was a lie.

Given what we know about the game overall it should come as no surprise that some Stars players had gaudy possession numbers.

At this exact moment in time the Stars are five points behind the Wild with one game in hand. The playoff picture looks much prettier with six consecutive points earned. On Monday the Stars take on another team ahead of them when they square off with the Avalanche. The way they are humming right now the Red Army could be on the opposing bench and the Stars could scratch out two points.