For Lindy, A Statistical Recap of Toronto at Dallas

Share All sharing options for: For Lindy, A Statistical Recap of Toronto at Dallas

See? Luck does even out over time. The Dallas Stars ripped the Toronto Maple Leafs a couple new ones Thursday night 7-1. The game seemed quite a bit more boring than that, but the charitable Leafs goaltending made things quite a bit more exciting. The Fenwick chart shows what observes saw: the Leafs basically said uncle for the entire third period. 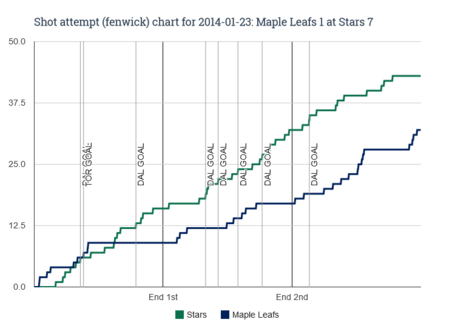 A lot of the damage the Stars generated was on special teams. The Stars generated several prime chances shorthanded, and the powerplay was humming all night fueled by crisp quick passes. The Leafs, fourth in the league in powerplay percentage, looked like the Stars usually do. They kept getting bottled up at the Stars blueline and generated very little with their opportunities. The scoring chances from the game make it seem like the Leafs were the Stars' equals at even strength, but the score would suggest otherwise.

The Stars had a slight advantage in Corsi, Fenwick, Shots, and Scoring Chances. They blew the Leafs out so handily though that the necessity of keeping a sustained attack going was minimal.

The individual player chances and Corsi show a similar result. Most of the Stars were even or very close to even in Corsi and Scoring Chances at even strength. There really isn't much that can be said about the game that hasn't already been said. The Leafs were terrible and a motivated Stars team took advantage.

The good guys take on Jussi Jokinen's Pittsburgh Penguins tonight with a chance to yet again climb closer to the playoff race. The temptation to be conservative offensively will be there with the Penguins in town, but the last two games are further examples of how the Stars can be successful by focusing on their strengths. Offense and goaltending are going to carry this thing as far as it can go.