For Lindy, A Statistical Recap of Minnesota at Dallas

The Stars beat the Wild 4-0. This is the statistical story of that win.

Share All sharing options for: For Lindy, A Statistical Recap of Minnesota at Dallas

The sky has stopped falling temporarily. The Dallas Stars knocked off the Minnesota Wild handily tonight by a score of 4-0. By any measure the Stars were dominant. They returned to their strengths by pushing the tempo. You remember the saying about how the best defense is a good offense? The Stars proved that at least for a night during their blitz of the Wild. 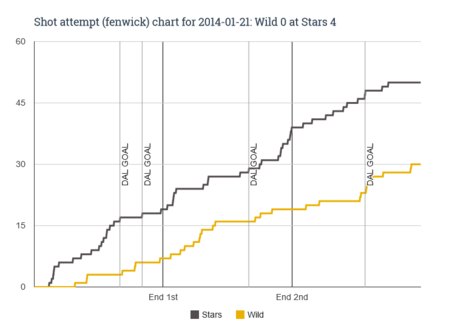 The game was never really close. The Stars were dominant at even strength. The Stars looked wonderful on the powerplay. The only time this game was close on the shot chart was when both teams had zero attempts on net. From that point on the Stars laid it on thick, eventually ending up with plus 12 attempts at net more than the Wild at even strength despite the Wild trying to open things up to get back in the game.

The scoring chances tell an even more dominating story.

The Stars generated 12 chances at even strength while only allowing four. The Stars consistently threw puck on the net on the powerplay where they generated an additional seven chances.

The Corsi totals for some individuals Stars look rather pedestrian tonight, but the scoring chance totals show a more accurate picture of what happened. The reunited Jamie Benn and Tyler Seguin line was dominant in their ability to generate chances.

Benn and Seguin were both plus seven. Erik Cole and Alex Goligoski were both plus eight. Every member of the Stars lineup was at least plus one in scoring chance differential. The Stars got a full team effort on a night when they desperately needed it.

This is how the Stars are capable of playing. When they attack they can be a very good team. When they worry about making mistakes and play conservatively they aren't a good team. They are going to give up some goals, but at this stage who cares?

The only thing anyone will worry about when the story of this season is written is if the Stars scored more than they allowed. The Stars can worry about improving the blueline in the offseason or, perhaps, at the trade deadline. Other than that this team needs to continue to focus on their strengths to be successful. They showed what they can do tonight. A few more efforts like this and the Stars are right back in the playoff hunt.