For Lindy, A Statistical Recap of Dallas at Nashville

All the numbers you could possibly want.

Share All sharing options for: For Lindy, A Statistical Recap of Dallas at Nashville

The Stars are doing everything they can to disprove every advancement made by the #fancystats community over the last ten years. They dropped a 4-1 game at the hands of the Nashville Predators tonight despite once again statistically being the better team. Several individual players had dominant games, and the team as a whole generated more offense than the Predators as you can see below.

The Fenwick chart from the loss is just for even strength. The widening gap you see at the end is due to score effects which essentially say that if a team is down by two goals or more they can be expected to generate more shots than the opposition due to pressing to try to bring the game even. 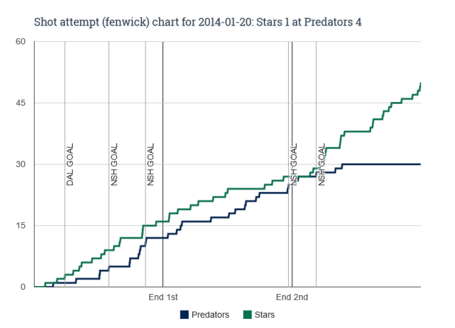 In the middle of the first the Stars opened a gap up between themselves and the Predators. They more or less maintained that gap until the end of the second period when the Predators pushed forward for their third goal. The teams were more or less even by the time the Predators scored the fourth goal before the Stars pulled away as they spent themselves trying to get the game closer.

The cumulative Scoring Chances, Corsi, Fenwick, and Shots are in the next table. As a reminder, the blockquoted text below is the thought process behind tracking scoring chances:

CF, CA, and CF% are Corsi For, Corsi Against, and Corsi For Percentage. The next statistics follow the same pattern. F is Fenwick, S is shots, and SC is scoring chances.

Again these numbers are at even strength. When the game was close (less than two goals) these numbers were closer, but the Stars still had a noticeable advantage. The Stars flung pucks at Carter "The Adventure" Hutton tonight, but couldn't generate quality chances. Both teams created twelve chances at even strength.

The individual chart is also at even strength. Several Stars players had big games.

Antoine Roussel and Alex Goligoski were both +13 Corsi. Tyler Seguin was +11. Seguin was able to convert some of that into chances as he was +4 in chance differential. Alex Chiasson also had a solid game in the scoring chance column, He was also +4. Ryan Garbutt and Trevor Daley took the biggest negatives at -6 and -5.