After a disappointing result in Minnesota the Stars look to end their mini-trip on a high against Shea Weber and the Predators.

The Dallas Stars out-played the Minnesota Wild Saturday night in every conceivable way- Except the scoreboard didn't reflect it when it was all said and done.

Now instead of looking ahead at the team they're attempting to chase they must look behind them because the Nashville Predators sit just a point back, threatening to knock the Stars down another peg in the West's impossible race.

"There's no doubt that we're at red alert, we know that," Ruff told media Sunday. "I thought we played a game that had the intensity to win [Saturday], but we didn't win, and that's hard."

That intensity translated into domination where puck possession and shot attempts were concerned. 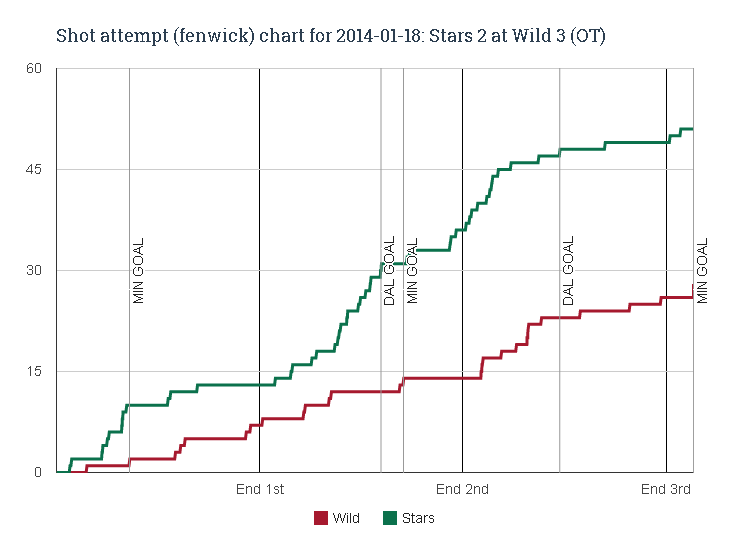 The Stars really pushed in the last half of the second period and into the early stages of the third, and got rewarded with the tying goal, but clearly deserved much better.

Now nine points back instead of eight after a direct opportunity to play catch-up, the whys and the hows start to lose their significance. And there's only the results.

"I want to see people push through and try to be a difference-maker," Ruff said, and maybe that's been a problem for them lately. They need the occasional herculean individual effort to push them over the hump. To pull them, kicking and screaming.

Tyler Seguin and Jamie Benn appear to be the only options, with inconsistent, patchy contributions from all other areas of the lineup, and they can't do it every single night. Case-in-point: Alex Chiasson is the team's third leading scorer, owns a -18 rating, and just broke a 20-game goal drought Saturday night.

Fans want badly for Valeri Nichushkin to be that game-breaker, but the 18-year old is fatigued and getting swallowed up a little by a grown man's league. "He's had a little bit of a tough ride," Ruff said of Big Val, "and he said he's felt real tired."

He may or may not re-enter the lineup for this one.

"He has to be energized and he has to play really hard," his coach told Mike Heika yesterday. "If he doesn't have that in his game yet, I have to be patient with him."

So the Stars will continue to work to find offense. Aside from their four-goal outburst against the Oilers (plus an empty netter) they've managed 2, 2, 2, 2, 0, 3 and 1 in seven of their last eight games.

The Predators, meanwhile, have points in three of their last five (2-2-1) and have found something that eludes them perpetually- A little offense.

They've managed 11 goals (and an average of 34 shots) over their last three games, for a change, and it's their special teams play that is to thank as five of those tallies have come with a man-advantage (5-of-13 in that stretch). So staying out of the box has to be job number-one for Dallas tonight.

Pekka Rinne remains out, and will continue to be until after the Olympic break, at least. It is their only injury, currently, but continues to be a defining pillar of their, thus far, disappointing season. So after watching their backups try and fail to find consistency in his stead they traded winger Matt Hendricks to the Edmonton Oilers last week for Devan Dubnyk.

Josh Cooper of the Tennessean offers his thoughts on Dubnyk's debut on Saturday against Colorado:

The Predators traded for Devan Dubnyk in order to solidify their goaltending, but against Colorado the former Edmonton goalie looked like all their other options. When Nashville needed a save, it didn't get one.

Granted, you can't make a verdict on Dubnyk after just one game, especially his first one with a new team where there were probably some nerves involved. Also, no matter how Dubnyk plays from here on out, we still think the Predators won that trade.

That said, in order to be the stopgap until Pekka Rinne returns to peak form, they'll probably need a better performance from Dubnyk than what they got on Saturday. [Read the rest at The Tennessean]

The diminutive sophomore defenseman Ryan Ellis has found his game a bit, tallying five points in his last five games.

Seth Jones, joining Val Nichushking in the "this league is hard" club, has a team-worst -19 on the season and is -8 in this last four games alone.