The Stars captain caught Cooke high in overtime, but is it a rule 48 violation and will it get him suspended as a repeat offender?

Sometimes when Jamie Benn gets mad, he takes that anger and funnels it into raising his level of play beyond what most in the league can match.

And sometimes when Jamie Benn gets mad, he gets stupid.

It was the latter last night for the Dallas Stars captain, and it may cost him a few games in the press box or a very significant check.

Early in the overtime of the Stars 3-2 overtime loss to the Minnesota Wild, Benn came across Matt Cooke as he was trying to carry the puck into the Wild's zone. The puck slid between the two, and Benn's forearm and shoulder drove into Cooke high and hard.

A lot of places are calling this an elbow, but that isn't the description I would use. In my viewing of the replay, the elbow is tucked on contact and only comes out as Benn explodes through the hit.

That doesn't excuse the hit, though. This walks right up to the line of and possibly tips over into violating rule 48, or illegal check to the head. Benn catches mostly Cooke's upper body and chin area as he sideswipes him going into the offensive zone.

Here's the full video of the play

And here's the obligatory GIF:

So you can put it in context, here is the elbowing rule:

45.1 Elbowing - Elbowing shall mean the use of an extended elbow in a manner that may or may not cause injury.

Like I mentioned higher, Benn's elbow is not extended on contact - it extends through the course of the hit. When the NHL punishes people for elbowing (like they did to Dustin Brown for this hit or Shane Doan for this hit or Jared Cowen for this hit), the primary contact is almost always with the elbow cap. That's not the case here. Benn's first contact is with the bicep and shoulder pad. 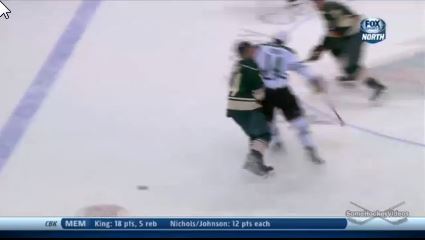 But Benn is not out of the woods because this is possibly a rule 48 violation. Here's that ever popular call:

48.1 Illegal Check to the Head – A hit resulting in contact with an opponent's head where the head is targeted and the principal point of contact is not permitted. However, in determining whether such a hit should have been permitted, the circumstances of the hit, including whether the opponent put himself in a vulnerable position immediately prior to or simultaneously with the hit or the head contact on an otherwise legal body check was avoidable, can be considered.

Caveat - this is the rule as it is posted on the NHL's website. However, the language was changed this year and targeting is no longer necessary. The hit to the head just has to be avoidable for the hit to be a violation.

Benn is also a repeat offender, having been fined $10,000 for this equally stupid hit on Edmonton's Ryan Jones last March.

In terms of comparables for tonight's incident, this hit by Joffrey Lupul last spring is fairly close, and it earned a two-game time out. This one from Deryk Engelland was also an illegal check to the head that got five games, though it caused a noticeable injury and was a much more noticeable, head-only pick. Given that, and given Benn's repeat offender status, I'm going to guess this is worth three games if they classify it under this rule.

They very well might not call it that, though. Many times, things I am just sure are going to be called an illegal check to the head are let go because the Department of Player Safety feels there was enough contact with the chest or shoulder to absolve the hitter. Also, Cooke and Benn are in crossing patterns right before the hit, and Cooke is moving a bit. Does he move enough to bring in the caveats about putting yourself in a vulnerable position immediately prior to the hit? Can he make an argument that Cooke was coming in for the contact anyway and he tucked his arm to protect himself? Was the hit avoidable enough that neither of the above matters? Only Brendan Shanahan knows for sure.

Benn does lunge out to the side a bit when Cooke passes him, resulting in the sideswipe sort of hit. But Cooke is also trying to roll to the side at that same instance, probably exacerbating that sideswipe action. Again, it's a very, very gray area.

It needs to be noted that this hit was likely some sort of retaliation to an earlier retaliation in this game. In the second period, Antoine Roussel caught a Wild player with a high stick right in the nose, a play that was ruled part of a follow-through of a shooting motion. This incensed the Wild. In the third period, just before the Stars tied the game on an Alex Chiasson goal, Benn took a very hard high stick on the half-wall that also went uncalled. I couldn't find who threw that hit, but it had Alex Goligoski, of all people, up in arms.

Given that background, and given that Cooke was on the ice during the sequence where Benn was high sticked, I wouldn't be surprised if it was some sort of retaliation. The problem with retaliatory plays is you eventually get caught, and Benn was the guy caught on camera for all to see.

I've said it before, but it bears repeating - a lot of the hockey rules exist in a very gray area where the same play can be argued as clean or dirty and both arguments can be entirely reasonable. This is one of those hits. I wouldn't argue with a three game suspension, but I wouldn't argue with nothing either. I know that's kind of playing both sides of the fence, but I honestly won't be surprised with anything in this case.

Unless, of course, the NHL calls it an elbow. That's just silly.

But the bottom line is that it was a silly hit by Benn, who should have been more focused on getting the puck into the offensive zone than getting his pound of flesh from Cooke. I get that he was angry, both because the Stars were struggling to score yet again and he felt he got hacked earlier. But he has to be smarter than this.

[UPDATE: Mike Heika has reported that Jamie Benn does not have a hearing scheduled with the Department of Player Safety for this hit. The play appears to be classified as defensive in nature. Since the Stars play on Monday in Nashville, it's unlikely he's receiving any kind of supplemental discipline if he doesn't have anything scheduled as of now.]