Well that's a frustrating one. I need a beer.

Outplaying the opposition and still finding a way to lose -- thus is this Dallas Stars team right now.

Dallas came out with some pep in their step, en route to completely out-playing the Wild for the period. Even with a 3:36 power play, the Wild managed only three shots on goal the entire period. Dallas didn't allow an official shot on goal for the entirety of that penalty kill.

Yet, as has happened so much in this stretch, Dallas left the first period with a one in the Wild column and a zero in their own. Erik Haula scored his first NHL goal when Erik Cole would attempt a shot from the blueline that hit Haula instead and led to a breakaway against Kari Lehtonen. It's the exact play that has been scorching them this year, and what Lindy Ruff wants them to minimize in their game.

Ray Whitney had the best look for Dallas in the first frame, when he would take a phenomenal pass from Shawn Horcoff right in the slot, which he was allowed to come down into uncovered. It was a good look by some of the veterans.

A frustrating period for the Stars who most likely deserved better. Here's the advanced stats after the first showing how Dallas outplayed the Wild: 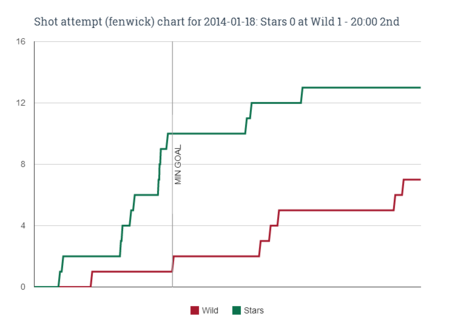 Dallas really pushed the pace in the second period, and continued outplaying the Wild. There was a stretch early on where Dallas had about two solid minutes within the offensive zone and couldn't find a way to convert. Ryan Garbutt finally tied the game up after the Stars put a lot of traffic in front of the net.

That tie would be short-lived, as Trevor Daley would fall covering Ryan Suter and he'd get a step on him to setup in front of Lehtonen for a redirect goal. Another period where the Stars probably deserved better and would come out trailing (again.) Just how much were they dominating the Wild at this point? I'll just leave this here.... 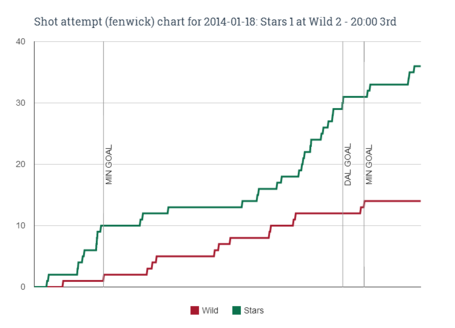 Another dominating period by the Dallas Stars. They had to kill another penalty in the game in the third, and Jamie Benn had one of the best short handed chances by the Stars in recent memory. He would get boxed out and get a shot off, and Alex Goligoski, who was trailing him, wasn't able to get enough of a position to bury the rebound on the side of the wide open net.

Alex Chiasson would tie the game up to send it to overtime with a power play tally. Yes, it's like seeing a unicorn and a pot of gold at the end of the rainbow at the same time. It actually did happen, your eyes are not failing you.

The Stars seemed to be outplaying Minnesota, again. There is some debate as to whether Benn's hit was an elbow to Matt Cooke's head or whether it was a forearm to the chest. Some think he got away with one, others think it was clean -- will be interesting to see if Benn gets a call from the Department of Player Safety for that one. The Wild would score on a rebound to end the game and collect the extra point when Brenden Dillon was left in the defensive zone without a stick. None of the forwards on the ice with him gave him theirs, which to me is kind of defense 101 when you're in your own zone -- the last guy you want without their stick, aside from the goaltender, is a defenseman. Benn should have recognized Dillon didn't have his stick and come across to get the guy streaking down the wing, but he wasn't able to and Nate Prosser just put it home.

It's a point, but they really deserved the full two tonight. Bad luck dragon continues to bite this team.