Two points the Stars must have to keep playoff hope alive.

This was supposed to be a Super Bowl of sorts for the Dallas Stars.

(I may owe money for typing that phrase, by the way. Super Bowl! Ooops)

After traversing an eight-game scheduling dream consisting of seven against the Eastern Conference and a perfunctory date with the Edmonton Oilers the Dallas Stars were supposed to be sitting pretty.

Minnesota's December stumble was enough to set anyone in Dallas' spot up pretty for real playoff consideration, but Ruff's bunch struggled, losing ground.

Dallas sits, therefore, eight points back with three games in hand. The teams will meet again later this month at the American Airlines Center, giving the Stars opportunity, at least, but how much closer things might have been...

"It's huge. Four point games, all of them," said Brenden Dillon. "Especially playing Minnesota twice in four days, we want to set the tone in the first game. I think we need to gain some of the ground that we lost. We understand the importance of these games and what this two-game road trip will mean for us."

Preparations for this one may include the splitting of Jamie Benn and Tyler Seguin, though confirmation from morning skate will be needed. Lindy Ruff loves to shuffle things up when bodies are unavailable.

Speaking of which, Ray Whitney and Sergei Gonchar both missed practice Friday, and both are in doubt for this one tonight.

From Stars PR: "Dallas travels to play divisional rival Minnesota on Saturday night in the second meeting of the season and final contest at Xcel Energy Center during the 2013-14 campaign. The Stars lost 5-1 on Oct. 12 earlier this season with the lone goal being scored by JORDIE BENN. Dallas has lost two of their three games at Xcel Energy Center and last recorded a victory on March 13, 2012 (1-0)."

The Wild are the poster child for what the Stars hope to accomplish right now- Digging out of a massive losing streak where nothing seems to be going their way.

Minnesota dropped six in a row, mostlty to Eastern Conference teams, and eight of ten overall. They went nearly an entire calendar month without a regulation win (December 8th to January 2nd, where they beat the low-hanging fruit known as the Buffalo Sabres).

Since that they've won six of eight, putting themselves back comfortably ahead of Dallas, who, had they won even just two of those six games, or else lost a few in OT, would be tantalizingly close to Minnesota now.

The Wild turned things around with their defense, and like New Jersey they'll try to stifle you. Since beating Buffalo their goals against totals have been 1, 3, 1, 1, 4, 0, 3 and 1. 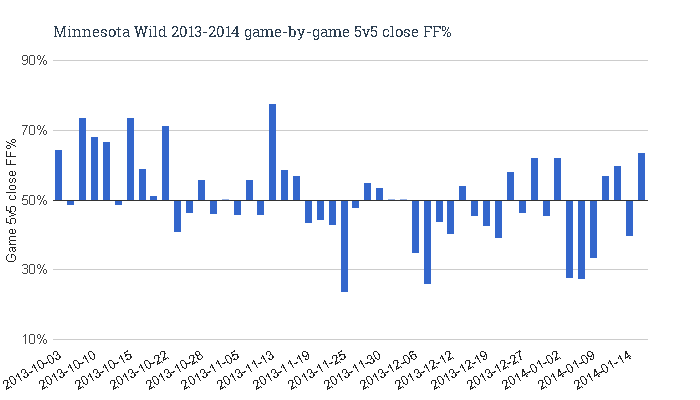 They may be winning, but their share of the puck possession is still trending down considerably from where they started in October.

Zach Parise has been skating (broken foot) and is nearing his return, but it's not expected to be tonight.

Puck drop is on TXA-21 tonight