For Lindy, A Statistical Recap of Boston at Dallas

Share All sharing options for: For Lindy, A Statistical Recap of Boston at Dallas

The title of this post will be explained later, but the main idea is that this is going to be a regular feature highlighting the statistical aspects of each Stars game. The post will cover everything including scoring chances, Corsi, Fenwick charts, individual player reports, team totals, and match up data.

The first piece of information you will come across each night is the Fenwick chart. The Fenwick chart from www.extraskater.com is an informative chart that shows a picture of the shot attempts in a given game, but doesn't include blocked shots. The team with the line higher up the y-axis at the far right side of the graph ended the night with more unblocked shot attempts. 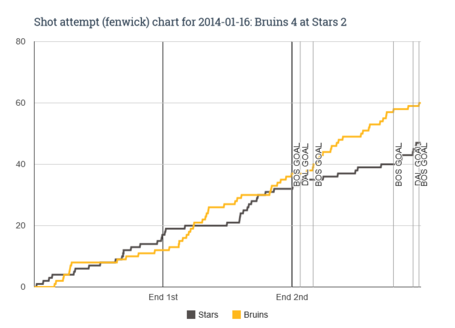 The Stars pulled ahead at the end of the first through the early second period. In the second and third periods the Bruins imposed their will and took the game over. The Stars looked good for a while, but the superior depth of the Bruins proved to be way too much. The constant odd man rushes coming against Kari Lehtonen didn't help either. The chart more or less matches up with how the game played out after the first period.

In these posts you will also find the scoring chance tally from each game. These are tallied by hand, spit through an Excel spreadsheet, and sorted to show who was on the ice for each scoring chance for and against. The scoring chances for the game are tallied according the the standards used here in the past. The area where chances are recorded is the area directly in front of the net extending to the top of the face off circles. 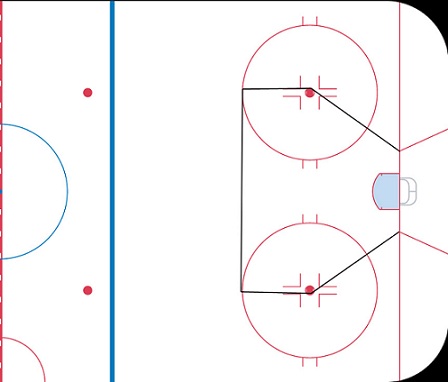 The justification for why chances are tracked can be found here if you are so inclined. Essentially any shot directed towards the net from this area is a scoring chance. The chances for this game are part of the data broken down below:

CF, CA, and CF% are Corsi For, Corsi Against, and Corsi For Percentage. The next statistics follow the same pattern. F is Fenwick, S is shots, and SC is scoring chances. You may notice that the Bruins dominated in all four categories. This is just at even strength for the most part. Scoring chances are in all situations.

Jordie Benn, Sergei Gonchar, and Brenden Dillon had rough nights. The duo of Rich Peverley and Valeri Nichushkin got especially drilled too. Peverley got beat up to the tune of -8 Corsi and Nichushkin -9. The Stars managed to not attempt a single shot with Ray Whitney on the ice on his way to a -8.

All in all, this wasn't a particularly close game despite the tight score for most of the game. The team that was better tonight won despite Zdeno Chara attempting to impale his own goaltender. The Stars get back on the horse Saturday with two more precious points on the line.

As far as this post goes, you can expect to see more of these going forward if there is interest.

And finally you may or may not have noticed this fanpost from a few days ago. A member of In Lou We Trust is looking for help tracking passes. If you are interested find your way to the link to volunteer your help.