The Traverse City action last night afforded us a look on Twitter at the Dallas Stars' new road jerseys, but what of the accoutrements? The locker rooms, the scoreboard, the in-game presentation (the uh, ice girls?) - American Airlines Center will be teeming with "Victory Green" in new places.

Today the team tweeted a picture of the new center ice logo as laying down this season's sheet nears completion.

It's finally done! Ain't she a beaut? pic.twitter.com/dFAc3JQKya

Pass or fail seems a poor question as it's just the logo again, cut and dry. Everyone's made their opinion known about that since early June, so there isn't much new to judge here. I think I speak for most of my cohorts when I say it still looks great, and it's still growing on me.

As with everything else, of course, it's not what the Stars are skating in or skating on - It's what the scoreboard looks like at the end of the night more often than not that makes any difference. A week from today the entire team will be working on just that in Fort Worth.

Are those of you steadfastly against the new look coming around on it as the season approaches?

The next question... what will become of this now that the gold is no longer? 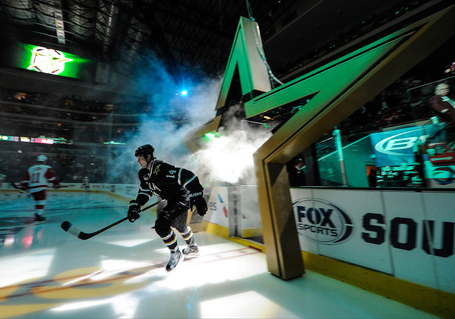