We begin our Dallas Stars Impact Player Ranking series with a discussion of the older Benn brother.

When the Dallas Stars failed to extend a qualifying offer to Jordie Benn (doing so would have given him arbitration rights, if I recall correctly) many assumed that his time in town had come to a close and he would become an unrestricted free agent.

As it turned out they were just busy negotiating a new three-year contract, keeping Jordie close to younger brother (and seemingly best friend) Jamie for the foreseeable future.

Work is right. The elder Benn may have a more favorable contract now but a place on the roster every night is far from certain as a stable of young defensemen with higher projected ceilings rapidly mature around him.

With less than a month to go until opening night, opportunity could come Jordie's way via injury. Rome is projected to be low on the Stars' defensive depth chart and is still rehabilitating from an off season hip surgery.

"I definitely feel better," Rome told the Morning News recently. "The procedure went well, and they said anywhere from four to six months, and last week was exactly four months. I feel like I'm on the right track right now."

It's a close race on paper. (Graphic from Hockey Abstract) 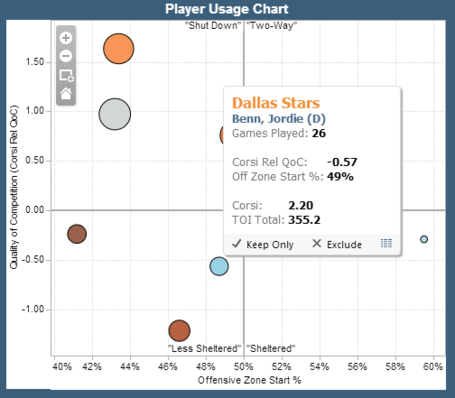 Benn (light blue bubble) had a much better CORSI rating (measuring the team's possession of the puck while he was on the ice) than Rome did (the left-most bubble), just slightly in the positive, while Rome was trusted with the greatest percentage of defensive zone starts on the team above even Robidas and Dillon. They played 26 (Benn) and 27 (Rome) games each.

Defensive assistant coach James Patrick will have to choose, or watch as Connauton or Oleksiak make a case to pass each.

There's been talk all off-season, following a lack of departing defensive assets, that the Stars may decide to carry eight defensemen to start the season, which they did for a time last year as well under Nieuwendyk/Gulutzan. In that case making the roster could be likely, though playing time will have to be hard won.

Jordie spent 49.4% of his ice time with Trevor Daley last year - His top partner by a wide margin. The next highest frequency after that was 24.6% with Philip Larsen, now departed. Daley played his off-side with Benn and could do so again, or elsewhere. The Stars have just one right handed shot (Robidas) out of Benn, Gonchar, Goligoaki, Dillon, Benn, Rome and Daley. Gaunce, Connauton and Oleksiak all shoot left as well.

Stiff competition, if it materializes this month, could mean good things for an 82 game season certain to include injuries and replacements.

The interesting question about Jordie Benn is not where he'll fit this year - But in the next two as his contract becomes a guaranteed one-way proposition. With the Connautons, Oleksiaks, Gaunces and Nemeths of the world all adding another year of professional experience how will Nill handle a growing stable of potential young blue liners?

For now we'll call it a wonderful potential problem. History tells us one of those might become a top two pairing guy, and maybe another a solid depth player. With Jordie Benn already there in the eyes of some, he's ahead of the game.

Where do you see Jordie Benn slotting this year and how many games will he play?