Rob Vollman's Hockey Abstract is out and packed full of information for those wanting to learn more about the current state of statistics in hockey.

If you are interested in modern statistical research and thought in hockey, but have a hard time deciding where to start learning, you should check out Rob Vollman's Hockey Abstract. The Abstract is a compilation of essays about very basic key components of modern statistical thought in hockey with a focus on the key concepts instead of the math behind those concepts.

The Abstract takes you through a few key ideas like translating performance from league to league, player usage charts, possession metrics, and some interesting questions. The most interesting question to me was Vollman trying to determine who are the top 100 coaches of all time. What really stood out to me were all of the Stars coaches (and coaching candidates) on the list: 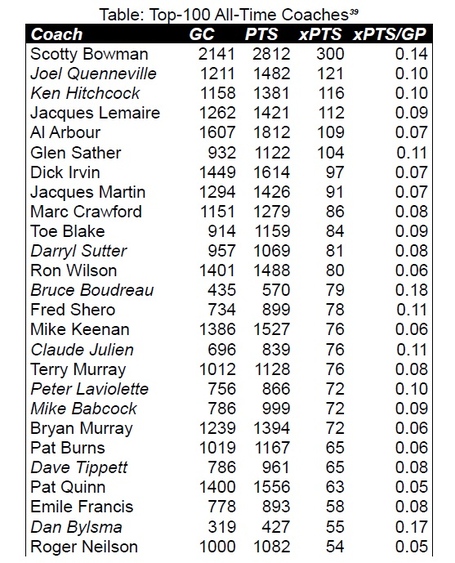 Ken Hitchcock slid in at #3 followed closely by Marc Crawford at #9. Dave Tippett follows at #22. Crawford took a good deal of flack during his time in Dallas, but historically he grades out pretty well here. 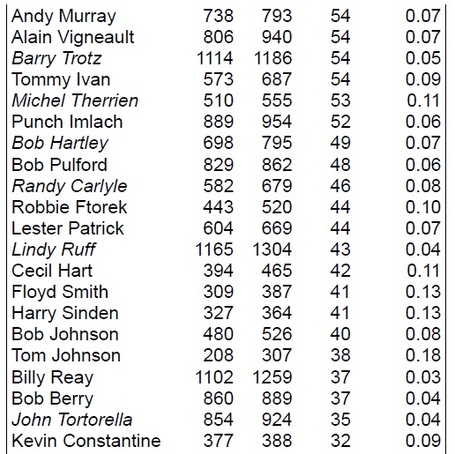 The second part of the coaching list has Alain Vigneault at 28, new Stars coach Lindy Ruff at 38, and John Tortorella at 45. I found it interesting that the ranking of those three falls in line rather well with how the Stars coaching search sorted itself out. The Stars wanted Vigneault, but lost him. The Stars then targeted Ruff, but reportedly didn't show much interest in hiring Torts. A list like this will generate debate, but it's at least interesting to see the reality of the search match up with the index Vollman put together.

Another uncommon aspect of the book that is of interest in the section on Quality Starts for goalies. Vollman basically took the methodology of the Quality Stars in baseball and applied it to goalies. His full logic is explained in detail in Hockey Abstract, but the leaderboard has a few surprises. 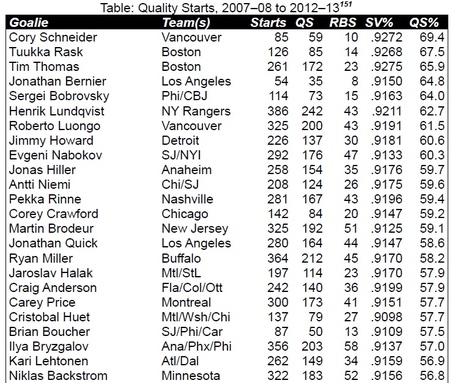 Two of the top three active goalies were backups traded this offseason. Cory Schneider was dealt in a draft day blockbuster to New Jersey for the #9 pick in the draft. Jonathan Bernier was dealt to the Maple Leafs in a heavily scrutinized deal where Toronto moved useful assets to improve upon James Reimer, a goalie whom most seem to feel was good enough to build around as is. Perhaps both goalies saw easier competition than their counterparts given that they were backups, or maybe they both have huge upside with their new teams. Maybe a little of column A and column B apply.

The aspect of the book that really makes it valuable are the footnotes. Vollman took the time to credit the original articles which have contributed greatly to our understanding of hockey. He cited everything from generic hockey websites to blogs to newsgroups. You can easily seek the primary sources out via the miracle of the internet if you want to learn more or if you are mathematically inclined and would like further detail about a specific topic.

It's a worthy read as we get ready for the new season, and can definitely lead you down an internet rabbit hole of reading if you follow the footnotes. It's only 13 bucks and full of information. If you're looking for some reading to get you ready for the season or want more hockey-related materials to add to your reading list give it a read.