The Dallas Stars new left winger is ready to prove to Team Canada that he belongs on the national team for Sochi.

Dallas Stars left winger Jamie Benn is in an interesting spot as a player when you compare the perception of him nationally with how he his revered by those that watch him play every single day. Benn has quickly become the player the team was built around, the reason the Stars made so many aggressive moves in order to move him back to the wing and the player that many expect to be named the captain before the season begins. On a rebuilding team, Benn is undoubtedly one of the two most important players for the future of this franchise -- nationally, it's a bit of a different story.

Much of it has to do with exposure and the simple fact that, for various reasons, the Dallas Stars don't receive the attention that other teams around the league receive. Benn was counted as one of the more underrated players in the NHL a few years back before seriously thrusting himself into the national conversation with a terrific performance at the All-Star game in 2012. Everyone around the NHL agrees that Benn is a great player, but the question is whether he has or will ever bridge the gap from "great" to being one of the elite players in the NHL.

Which is why his exclusion from the Team Canada national team camp for the upcoming Olympics should have come as no surprise. Sure, many of us believe he definitely deserves to be there -- especially with Lindy Ruff on the coaching staff -- but the question we have to ask ourselves is whether he truly belongs on the team over some of the other wingers invited. There were some who felt Benn's exclusion was the biggest snub from the team, but it's also understandable that perhaps there's still a bit more to prove.

The past two or so seasons, Benn has played primarily at center. He was never going to make the team as a center, and the wings on both sides are also incredibly deep for Canada. With Benn making the switch back to left wing this season, it's expected that he has a chance to make that ascension that everyone believes him capable of and with a big first half of the season -- Benn could certainly put pressure on Team Canada to reconsider his exclusion.

Many of us have felt that this was just another check in the box on the list of motivating items for Jamie Benn this season, and he backed that up when he talked to Mark Stepneski on Tuesday. Slowly but surely the Dallas Stars players are gathering in Frisco in preparation for the upcoming training camp, and Benn spoke at length to the media for the first time -- I think -- since the jersey unveiling back at the beginning of June.

"It gives you a little fire. I think I said that in the interview back home, I just want to kind of shove it in their face," Benn told Stepneski of Stars Inside Edge, referring to his snub from Team Canada. "It is what it is. I definitely want to be there. I'll just have to prove myself the first half of the year."

Benn, who says his wrist is fully healthy, has put on five pounds in preparation of playing a harder game on left wing this season. When he first came into the league Benn was an incredible force of physical presence and top skill and it will be exciting to see how his experiences at center will shape how he plays now that he's back on the wing.

"I'm excited about that, just looking forward to whoever I play with," said Benn, talking to Mike Heika about the position change. "(You work on) Stops and starts, shoot more pucks from more angles, I probably won't pass the puck as much."

Which means one of the NHL's most accurate shooters will be putting the puck on net more than ever before. I can't wait.

On top of having to wear those horrible jerseys with the worst collar design in the history of ever, Team USA also sat down for their individual profile pictures for the Olympics. I don't know what's going over there at team headquarters, but the photographer they picked not only made some interesting lighting choices but it also seems that no one told the players they were being photographed. [Puck Daddy]

Also, this has to be the most hilarious player profile photo I've ever seen. 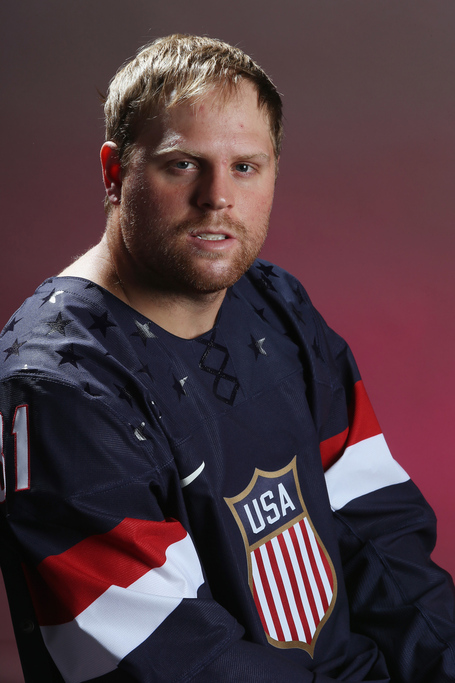 The Sedins are facing the call of free agency, but say they're willing to stay in Vancouver even if it means having to play through a rebuild. [Vancouver Sun]

Claude Giroux decided to skip the Canada olympic camp and because hockey is like football in Canada, a big deal was made out of nothing. Steve Yzerman says it's no biggie, as well. [Canadian Press]

Finally, here's video -- courtesy of Mark Stepneski -- from the skate in Frisco yesterday.