Peace Out, Pacific: An Anaheim Ducks Fan Bids Farewell to the Dallas Stars

In the third story of this series, a fan of the Stars former Pacific Division rival Anaheim Ducks sounds off on his real feelings about the Stars moving on.

Share All sharing options for: Peace Out, Pacific: An Anaheim Ducks Fan Bids Farewell to the Dallas Stars

There will be many fewer trips out to the west coast for the Dallas Stars in the coming seasons, as the Stars have finally, blessedly, moved on from the Pacific Division.

And that move couldn't have come soon enough for our friends who spend their time out at the Honda Center. Ever since the teams were united in the Pacific Division, the Stars and Anaheim Ducks have exchanged gut-punch playoff losses, not to mention a lingering sense of bad blood that spilled over into several memorable regular-season games.

As part of our ongoing Peace Out, Pacific series, our friends over at Anaheim Calling have put together a look at their feelings on the Dallas Stars as the teams move on from their divisional rivalry.

By Kyle Nichols, with an assist from Chris Kober

How do I say goodbye to the Dallas Stars? Well how do you say goodbye to someone you never really liked but were forced to spend time with while they were part of your family, like that really annoying fat aunt who always bought you socks for Christmas?

Party at my house!

For starters, come on who even likes Dallas? I mean with the exception of my one random roommate from college (who's probably reading this so... sup buddy) I can't think of a single person who's a Dallas Stars fan; not even my friends from Texas who care more about their beloved Rangers. Seriously that state cares more about its baseball teams than it does about the NHL which pretty much guarantees we can't be friends.

I mean come on the good riddance list goes on for miles. For one, this is a team that at one point iced Steve Ott, Marty Turco, Mike Ribeiro, Matt Niskanen, and Loui Ericksson all at the same time. One thing in common: every single one of these guys was a bona-fide Duck killer. Ericksson alone has 31 points in 41 games against the Ducks, Ribeiro has 44 in 42, and Steve Ott has 26 in 48 games plus 94 penalty minutes.

And what do all these guys also have in common? Every single one of them is gone. Ott now plays in Buffalo, Niskanen in Pittsburgh, Ericksson in Boston, Ribeiro in Phoenix, and Turco just flat-out doesn't play anymore. No wonder so many of what few Stars fans there actually are pine for the days of 1999 when Brett Hull's skate-in-the-crease goal brought this team the lone bright spot in its history since they moved from Minnesota to Texas. Oh, and think of how ironic that goal turned out to be, as just a few years earlier this happened.

In fact the fact that all of these guys are now gone is just another example of something that's so laughably bad about the Dallas Stars it's completely comical: they're almost entirely a farm-squad for the rest of the league. We're talking about a team that traded Niskanen and James Neal to Pittsburgh for Alex Goligoski! I mean Gogs is no slouch of a blue-liner, don't get me wrong, but the number of times this team has been completely had in trades over the last few seasons is just laughable!

Just look at some of the names that have been on the Dallas Stars roster in the last five years (and some still are): 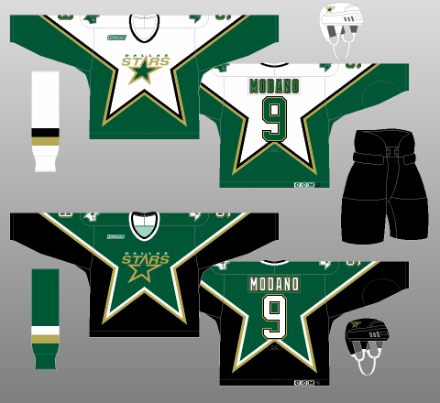 [AC Ed. Note: These glorious jerseys are tied with Ralph and Razor as the best thing about your franchise. -CK]

And let's not forget the Mooterus gaffe:

But THEN they moved on to what essentially looked like a glorified high-school basketball jersey with this one:

And now they've abandoned any and all attempts at creativity by simply ripping the logo off a Chicago Blackhawks St. Patrick's Day uniform and slapping on their own sad attempt at a logo that somewhat follows this god-awful "vintage" trend that everybody seems to love. 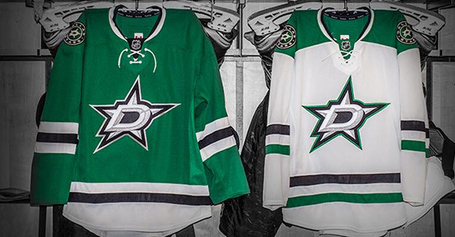 You're a young franchise, Dallas. Use this to make a logo that's not completely cookie-cutter like the rest of the league seems to be going with for once.

Oh but I guess not all of my memories of the Stars are bad. I mean yeah for the last few years their building has been less friendly than a Californian in rush-hour traffic, but without that rivalry this lovely gem would never have happened:

Likewise I've got some pretty fond memories of sharing a massive laugh last year as the Los Angeles Kings colossally goofed up this game on their own ice.

Overall however, I'm still pretty bitter about 2008 so none of these things even remotely come close to giving me any sort of a positive thought about this team.

So at long last I bid the Dallas stars adieu by laughing at the shards of what was once a pretty spectacular roster, snickering at their increasingly awful jerseys, and wishing them a better future in the newfound Central Division.

Because at this point it's going to be a while before a successful one gets here. In the meantime enjoy getting flattened by the Blackhawks and Blues.

Here are a few more parting shots from your other "friends" at Anaheim Calling:

Sorry about this (kind of):