Some observations of some notable prospects from this year's Dallas Stars prospect Development Camp.

The 2013 Dallas Stars Development is well underway, featuring a few of the top prospects in the system along with a number of younger players from around the Dallas area. This is a time for the organization to start helping these players adapt and prepare for the life of a professional athlete, and it gives fans a chance to actually see players in person after only having read about them in box scores and scouting reports.

After not having development camp in 2011 because of budgeting issues, the Stars camp in 2012 was a bit more star-studded. Alex Chiasson, Brett Ritchie, Brenden Dillon, Scott Glennie, Jack Campbell and Austin Smith were some of the more well-known and older prospects at camp last year who have all "graduated" in favor of the younger players in the system.

This year's camp featured six of the players drafted just a week ago in the 2013 draft, as well 2012 first-round pick Radek Faksa and a few other prospects from around the system. It was a great chance to really be able to focus on players that are more than a few years away, and to get a sense for how some of these young players have progressed and developed in the past year. 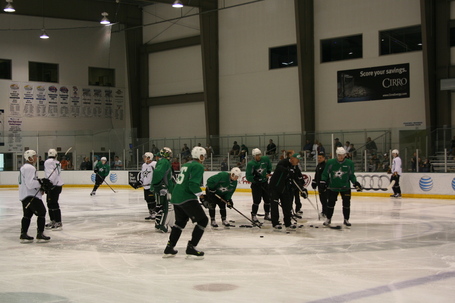 Development Camp is not an Evaluation Camp

So, there is one very important caveat to remember when reading observations from something like development camp -- as well as when observing camp with your own eyes. Absolutely zero conclusions can be made about a player based on just watching what happens in these practices, and especially after watching just one practice session. For one, these are grueling two and a half hour practices, that are being held each day, with the players also doing extensive training work in the gym along with other activities.

This is also a "skills development" camp and not one coach that is on the ice are making actual evaluations about these players on the spot. This is about teaching the players through drills and competition, as well as classes off the ice, about how to be a better pro hockey player. Many of the drills these players go through take them well out of their comfort zone, and they're asked to do things they don't normally do -- many times the players are also asked to slow down a bit and not barrel through these drills like their instincts say they should.

A perfect example: fans kept coming up to me and asking who No. 55 was, a player not on the initial roster. He was flying around the ice, dominating in competitive drills, was one of the biggest players out there and basically was the most polished player out there at camp. Fans would ask about him, excited about such a promising but unknown prospect. Who was this guy?

No. 55 was Francis Wathier, a veteran AHL player brought in to help the players out.

So, keep that in mind as I go through some observations about a few notable players I paid close attention to during two days at camp:

To me, Dickinson was the standout star of all of all the prospects at camp. Dickinson is an incredibly slick skater with incredible hands, and I'd be willing to go as far to say he might have the best hands of any of the Stars prospects -- including Valeri Nichsushkin. His awareness with the puck, and ability to use his size to protect it, makes him just as good a playmaker as he is a goal scorer. I've said it before but it's very clear now: Dickinson is the hockey version of a five-tools player.

Talking to him on Saturday, it was clear that Dickenson is still trying to figure out exactly what sort of offensive player he wants to be. He's a strong player in both ends of the ice, but he's working on his two-way game. I'm going to have a hard time not putting right at the top of the prospect rankings this next week. Going to be a tough decision.

Last year Faksa came to camp with a fair amount of hype, coming as a highly touted draft pick in the first round for the Stars. While it was obvious the skill was there, he didn't exactly stand out from the crowd in 2012. This year was much different and it was clear how much his game had matured, even through a tough injury-shortened season. He was clearly on a different level than most of the other players at camp, as he should be, and had the polish and maturity you would expect from a player of his caliber.

Faksa, who spent some time with the Texas Stars at the end of the season, will head back to Kitchener this next season. The Stars want him to get some good minutes on the top line there, to sort of build on what was a disappointing season in 2012-13. I didn't get the sense there was disappointment with Faksa himself, just that an injured knee and a severe illness really limited his actual development after being drafted.

Shore was playing with the first group, which was mostly lowYuen er draft picks and younger players, and he clearly stood out compared to them. He was bigger than I remembered from last year, and his a smooth skating puck-handler with an above-average shot. There are some who feel Shore could compete for the No. 2 center position a few years down the road.

Yuen, a fourth-round draft pick in 2010, was invited to the Stars camp after not getting a contract from the Winnipeg Jets. That seemed to irk Jets fans, who were upset the team was unable to keep what seems to be a very promising defenseman prospect. He was the clear standout among all the defensemen, a polished and mature skater who also has a very good shot from distance.

Yuen told me he prefers to think of himself as a more defensive defenseman, but he clearly has some offensive upside. He was the leading scorer among defenseman for the Tri-City Americans last season, and clearly has an aim to make the jump to the AHL this season if he can. Yuen is a very confident player, on and off the ice, and it seems the Jets' loss may be the Stars' gain. Division rivals now, eh?

There are many with the Stars who feel that Desrosiers was the absolute steal of the draft. Picked in the second round by the Stars, Desrosiers was a rising star last season after claiming the starting job in Rimouski. He then fought for and earned the starting job for Team Canada at the under-18 World Juniors, leading his team to a gold medal against the heavy-favorited USA team.

He is a very athletic goaltender with great mechanics, who likes to move the puck and compares his style of play to Carey Price. He'll have a good chance to represent Team Canada in goal for the Under-20's this next year, but he said his focus is on playing for Rimouski for now. 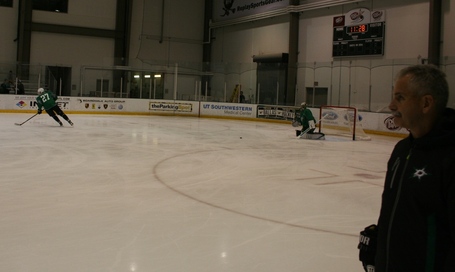 Nichushkin sort of created a bit of a stir for Stars fans at development camp, as he hasn't exactly destroyed every single player on the ice in every single drill like many were expecting him to. He looked very good on Friday in most of the drills, and it was clear he was one of the players on a completely different level than the rest. On Saturday, however, with Lindy Ruff and Willie Desjardins leading a very high-paced and taxing practice, it was clear that Nichushkin was well out of his comfort zone.

It's important to remember that Nichushkin understands very little English, something the team is already working with him on. He can communicate to a degree with his teammates, but there were several times when it was clear he didn't exactly understand the drill as the coaches had explained it. That's not his fault, exactly, and he would instantly work to figure out what he was to be doing.

Nichushkin sought out defenseman Dmitry Sinitsyn (#6) on several occasions, who would quickly point out the drill. Nichushkin also spent a lot of time with Francis Wathier, and he was as mentally engaged as any other player out on the ice, and more attentive than several others out there. 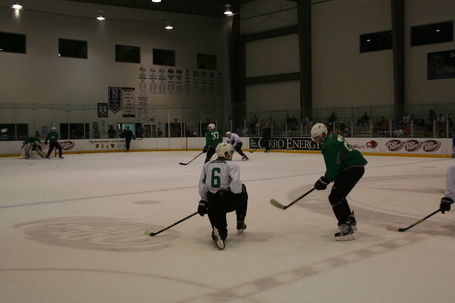 I was afforded a prime viewing angle by the team on Sunday, and I paid very close attention to Nichushkin. It was clear that fans were instantly looking for any weakness in the armor of this prized draft pick, and already the calls of "lazy" and "bad attitude" are being attached to a Russian prospect because of a bad practice. Nothing about Nichushkin's play on the ice made me think it was an attitude problem, and he seemed to get along just fine with his teammates.

It was just an off-day, and it seemed the comfort-level issues had a lot to do with taking Nichushkin's confidence out of his skates. He got better as the practice went on, however, and finished much stronger than he began.

There is an astronomical level of expectations placed upon this young kid, and it's important to remember that he's making a very sudden and very extreme cultural adjustment. He's a confident and sometimes-cocky player on the ice, but he's also a young player who has only recently moved to the United States from Russia.

I took several videos during practice, but I felt this was the best drill to highlight. This is a mini-rink three-on-three game that is played at a frenetic pace, and it is perhaps the best barometer of a player's skill in the tight spaces you'll find in the NHL. Dickinson and Cody Payne were excellent during these drills, with Kiviaho also showing some nice saves in tight against a superior team.

Also, the jerseys in this video show up much darker than they really are, the lighting is just too low for my camera phone to be able to pick up the colors as they should be shown. These practice jerseys looked sharp and the new Victory Green looks absolutely incredible out over the white of the ice.