You wanted a blockbuster trade? You got one.

Update: The trade is done. The Dallas Stars send Loui Eriksson and three prospects to the Boston Bruins, for Tyler Seguin and Rich Peverley. 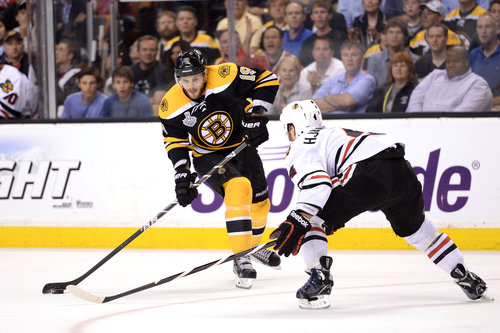 Jim Nill said he wanted centers so that he could move Jamie Benn back to the wing. Enter 21 year-old Tyler Seguin of the Boston Bruins.

The Dallas Stars are close to a blockbuster trade that would send winger Loui Eriksson to the Boston Bruins in exchange for center Tyler Seguin, per TSN's Darren Dreger. The deal would almost certainly have to include other parts as well, but this certain appears to be the level of move needed in order to land the center the Dallas Stars have been looking for.

Huge trade in the works. Boston and Dallas close on a deal sending Tyler Seguin to Stars for Loui Eriksson. Other parts involved as well.

Seguin's name was thrown out on the trade market this past weekend during the draft, with the Dallas Stars one of the teams mentioned as being interested. Drafted No. 2 overall in the 2010 draft, Seguin has mostly been used in a third line center and winger role for the Bruins, and now seems stuck behind David Krejci and Patrice Bergeron on the depth chart.

The 21-year old center is a puck possession guru and played outstanding for the Bruins during the postseason, despite not having the production that was expected of him, and had 32 points in 48 games this past season.

More on this shortly.