Often forgotten in the Seguin/Eriksson trade, Rich Peverley is a significant NHL talent that gives the Stars great versatility at center or wing.

"The Tyler Seguin Trade", as it will be remembered, brought a full-on media circus to the Dallas Stars owing to his exploits in social media and Bostons nightlife, and also tugged at the heart strings of fans as Loui Eriksson departed.

Largely lost in that shuffle has been a very nice player in center/right wing Rich Peverley, whose versatility makes him an option for the Stars on their first, second and third lines.

Peverley's professional career nearly didn't happen at all. After four years of college hockey at St. Lawrence of the ECAC he was undrafted and facing the daunting task of finding a job during the 2004-2005 NHL lockout when the market was flooded with out-of-work players. He landed with the South Carolina Stingrays of the ECHL and earned a tryout at camp with the Nashville Predators the following season, who would eventually sign him to an NHL contract.

To say Peverley's NHL career has been disjointed would be an understatement, though it's been through no fault of his own.

(You may recall his overtime winner, short handed goal, and power play assist against the Stars in a 6-5 OT Atlanta win that season seen here.)

What might he do with another actual full season, sticking in one place? Stars fans are eager to find out, but it's difficult to prognosticate without knowing which of four of the top-six position he may occupy, or possibly the third line center position. Boston had him, at times, play an ambiguous mix of wing and center.

Looking at the usage charts for the centers the Stars now have on the roster it's clear how Peverley was used last year, but the Stars don't have to put him in that same mold: 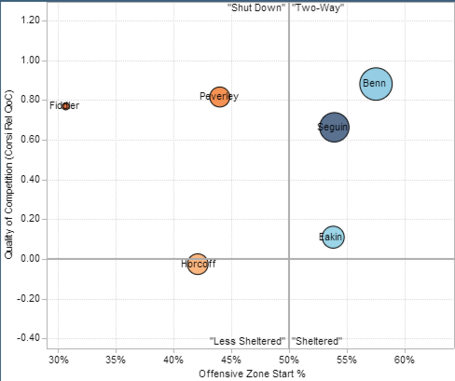 Horcoff would seem the likely candidate to continue getting those tough, tough minutes and, to use his words "shore up the defensive end." That could free Peverley to see his bubble's color (CORSI number) drift more toward the blue as he plays with the Benns, Seguins and Whitney's of the world. But we'll we see.

Like Loui Eriksson, who went to Boston in Peverley's (and Seguin's) place, he'll be hoping that a full training camp and a fresh start will see him return to form after the lockout got him off to a funky start and perhaps a sub-par season.

"There's no doubt when he looks at his stats, it's disappointing," Peverley's former coach Claude Julien said before healthy scratching him before game 1 in the playoffs.

"We all know that Pevs is a better player than he's shown, but he's right, I think he's been getting better lately and skating a lot better than he has all year. I think his stats are a little disappointing for him, but we've seen how good a player he can be."

They were never quite satisfied after hoping all spring that his production would pick back up a bit, as well as Seguin's. Now the Stars get to reap the benefits, but it's a risk.

What if Peverley is what he was last year now? What if Seguin has reached his ceiling? What if Sergei Gonchar is too old? What if Valeri Nichushkin doesn't adapt to the NHL well a la Alexnder Burmistrov? What if the coaching change alone does not improve a group of defensemen virtually unchanged?

It's all a risk. It could come together beautifully, and it could implode quite spectacularly.

Peverley, despite not having the hype that a Nichushkin, a Seguin or a Gonchar comes with, will be a huge part of the sinking or the swimming that starts in camp less than two months from now.