It's difficult to come up with a uniform concept that so perfectly blends the Stars long and rich franchise history with their North Texas roots, without just slapping the state outline on the front of a Minnesota North Stars throwback. The Dallas Stars did exactly that, however. They knocked it out of the park.

At first glance, the new Stars sweaters are almost overwhelmingly green. Tom Gaglardi heard the fans cries for green, and decided to give it to them in spades. At Tuesday's unveiling, there was much talk about how great teams tend to own colors. The Detroit Red Wings are the red team in hockey. The Toronto Maple Leafs are the blue team. The Dallas Stars aim to be synonymous with green in much the same way.

The shade of green on the new sweaters is so striking because it's so unique. The Minnesota Wild are doing their best to lay their claim to the color as well, but they've watered down that identity with primarily red home jerseys, and a shade of green that is so dark that it appears black from a distance, even in high-definition. That was something that Stars wanted to avoid, and that was a conscious decision.

There are easy parallels that can be made to the new look Stars and the famously kelly-green Minnesota North Stars, and they would be apt comparisons. During the unveiling event, Dallas Stars highlights were seamlessly mixed with North Stars highlights, setting the tone for a uniform that would be a fitting evolution of that heritage, without lazily throwing-back to anything in particular.

The color palette of kelly green and black brings back memories of the transitional years of this franchise. The final two seasons in Minnesota and the inaugural season in Dallas saw the Stars wearing primarily black uniforms, with kelly green and white stripes. Gold was only an accent, used sparingly in the logos. While many fans will miss the gold, myself included, this new identity isn't as far of a departure as many would have you believe.

The new home sweater is solid green, with bold white stripes surrounding a singular black stripe. It is paired with black helmets and black pants, properly framing the trademark "Victory Green" without going overboard with it. The road sweaters are white, with a green shoulder yoke, and simple singular black and green striping along the waist and arms. Not only does the green shoulder yoke showcase the focus on "owning green" again, but it's also a direct reference to the contrasting shoulders that adorned so many iconic Minnesota North Stars uniforms throughout history.

Not only is the shade of green an acknowledgement of the franchise's pre-Texas roots, it also ties in very vividly with the Dallas skyline, while placing the Stars as the Metroplex's lone green franchise. The colors are not the only tie-in to the city, however. The new primary mark represents Dallas hockey better than any other logo ever could. On it's surface, it's a "Big D," which is self-explanatory, but this is where I feel the look really merges that North Stars history with it's own Lone Star heritage.

Contrary to popular belief, the Dallas Stars are not the first professional hockey team that called the Metroplex home. Even in the 1940's, there was a team in the American Hockey Association and the United States Hockey League called the Dallas Texans.

Tom Gaglardi has stated that his intent with the new logo was to create something that looks as though it could have originated in the 40's or 50's. Many people will look at that statement and roll their eyes, because obviously metallic silver, bevels, and asymmetrical angles aren't exactly the cornerstones of hockey's golden age... but one look at the Dallas Texans, and it's hard to deny the similarities between Dallas's hockey roots and the NHL team that now calls Texas home. 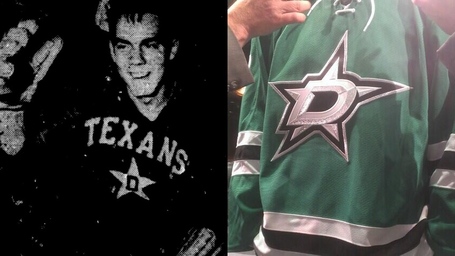 Overall, as a uniform nerd myself, are there a few things I'd tweak if I were in charge of these uniforms? Of course. Nothing major. Maybe an outline on the numbers, or a swap of the shoulder logo here or there... but in the end, those are not important. What is important to me is that the Dallas Stars set out to create a uniform that honors the franchise's roots, stays true to the identity of the city they play in, and rewards the fans with the green that they've been begging for.

After enduring the Mooterus, and a few too many years of those lifeless black rags from last season, it's refreshing and encouraging to see the new Stars regime finally get it right.