The reveal of the Dallas Stars new look last night was just one part of a presentation that marked the start of a new beginning for this franchise.

Share All sharing options for: Dallas Stars Jersey Reveal: Thoughts on the Rebranding, With More Photos of Jerseys & Logo

For those that were there at the AT&T Performing Arts Center on Tuesday night, the Dallas Stars Rebranding Event was one incredible experience to behold. The fans arrived extraordinarily early for the 6 p.m. start time, with the lobby overflowing well before the doors even opened at 5:30. There was a palpable sense of anticipation and excitement and while many were likely hesitant about what the new jerseys could bring, overall it felt like fans were just happy to be a big part of the Stars franchise progressing forward.

That's what this event was really about. The new jerseys and the new color scheme and logo will get the most attention, as they should, but what this really came down to was the official celebration of the new ownership under Tom Gaglardi and the fresh direction of the franchise moving forward.

The Dallas Stars have been a stagnant franchise for too long, stuck in place thanks to ownership woes and the financial hardships and restrictions that came with being owned by a conglomerate of banks. While Gaglardi did purchase the team back in November of 2011, he has yet to really be able to lay down the foundation of what he truly envisions for this franchise until this past offseason.

Dallas Stars CEO Jim Lites mentioned on stage on Tuesday night that this is the first full offseason for the new ownership and management group. Last summer the Stars offseason, along with the rest of the NHL, became mired in the lockout that lasted until January. Now, with a full summer ahead and a new general manager and a new coach, the franchise feels like we're finally moving forward instead of spinning the wheels attempting to just maintain position.

Part of this event, aside from the jersey reveal, was also a "State of the Dallas Stars" address, with Lites and Gaglardi making it known that the franchise is focused on growing the fanbase and taking advantage of being the only NHL team in Texas and the surrounding areas.

"We have the largest geographical footprint in the NHL," said Lites. He talked about how the Stars and their television broadcasts not only reach across the state of Texas, but also the states of Louisiana, Arkansas and Oklahoma. Lites mentioned a mindset and goal of taking advantage of the opportunity the Stars have to expand their reach across the southwest (or midwest or whatever you prefer to call this area of the U.S.) and it's clear this is a very big focus of the franchise.

Progress. The Dallas Stars franchise itself is moving forward, is expanding and growing -- on and off the ice. The best way to accomplish that is to build a winning team on the ice, and while the new jerseys received most of the attention on Tuesday there was also a very real sense of excitement about the impact Jim Nill will have on this franchise moving forward.

More on that later today.

It's also clear that Mike Modano remains one heck of a cult figure for the Dallas Stars fans. With the announcement of his jersey retirement, set for next March, the crowd on hand let loose with their biggest cheer of the night. Always fun to see.

As far as the jerseys themselves, as well as the new logo, there certainly seems to be a very divided response to the changes. We've known what changes were coming for quite some time so we were prepared, so perhaps being aware of what was to be revealed helped prepare me better than others. Such a drastic change is going to take time for fans to really process, especially when you're changing from a logo that has been with the franchise and this fanbase since 1993.

That logo is all Dallas Stars fans have known, and it's understandable that there would be consternation about possible changes. Gaglardi told us on Tuesday that he just didn't feel that, when compared to the rest of the logos around the NHL, the old logo faded into the background and just didn't do much to stand out. They wanted a logo that was simple and that would hold up when put next to those around the league -- and I think they accomplished that.

One big problem with this logo reveal was the leak that happened a few weeks back. That leak occurred on the official mobile app, and unfortunately did not truly represent what the logo truly would end up being when placed on the jersey itself.

It seems that it's the logo, moreso than the actual jerseys, which has led to the most consternation among the vocal group that does not like the change. Unfortunately, it seems the logo may translate better "in person" than it does as a 2D representation on screen -- I know that, after spending a lot of time around Jamie Benn and Mike Modano last night while they had the jerseys on, I just couldn't get over how much I loved them.

That's really all I can say -- in person, these jerseys and the logos look incredibly sharp. Here's a close shot I got of Modano's jersey, showing just how much the silver plays a part in making this logo really pop. 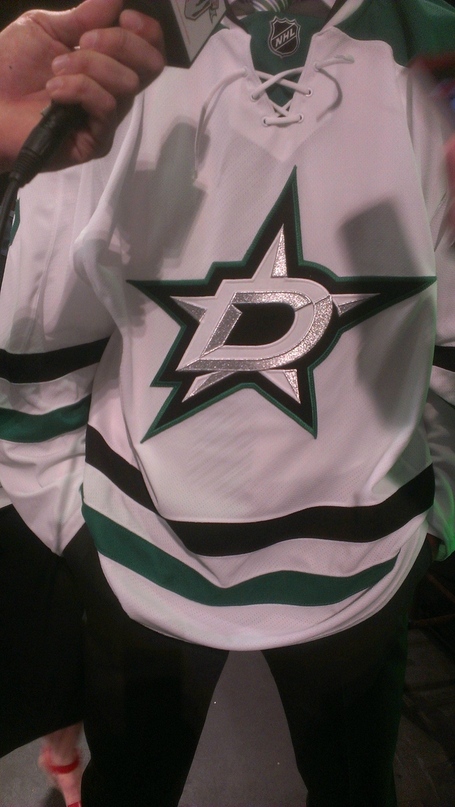 Overall, I love the simplistic look of the jerseys and colors really stand out to me. The Stars were going for a unique color scheme and they certainly accomplished that; when this team is on the ice, they are absolutely going to stand out. These jerseys were extensively tested on the ice and on camera and one focus for the Stars was to create a look that would also stand out on HDTV -- for too long, the Stars have been black and white and just sort of faded into the background, in my opinion.

These new jerseys fix that problem.

During the media availability, I was able to quickly snap photos of Benn and Modano close up wearing the jerseys. Because of how insane the stage was with cameras and media, these photos were a bit rushed -- pay no attention to the expressions on their faces. Both Modano and Benn were more than amenable to our requests, and it really was close to a circus last night, so we thank them for allowing us to take these quick shots: 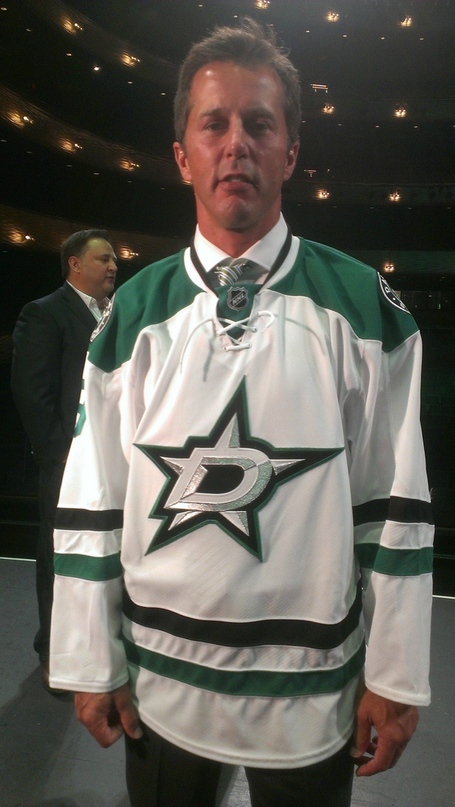 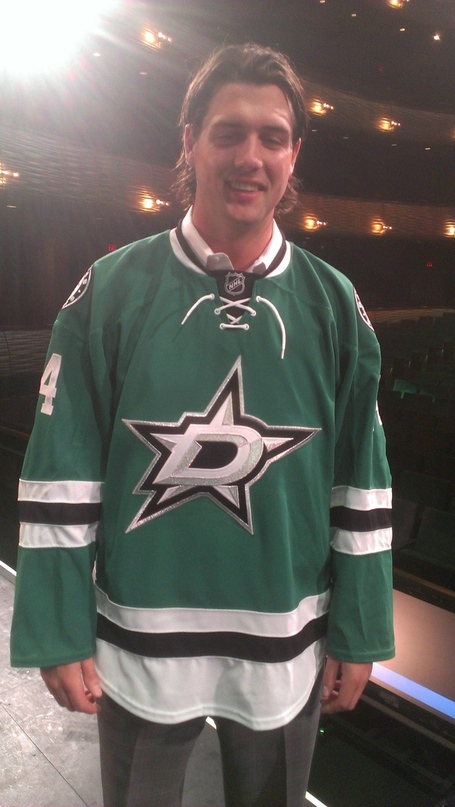 As this photo was being taken, Benn was laughing at a joke that he was a foot away from falling off the stage.

Here's another look at the full jersey, with Loui Eriksson donning the road white -- which is my instant favorite. 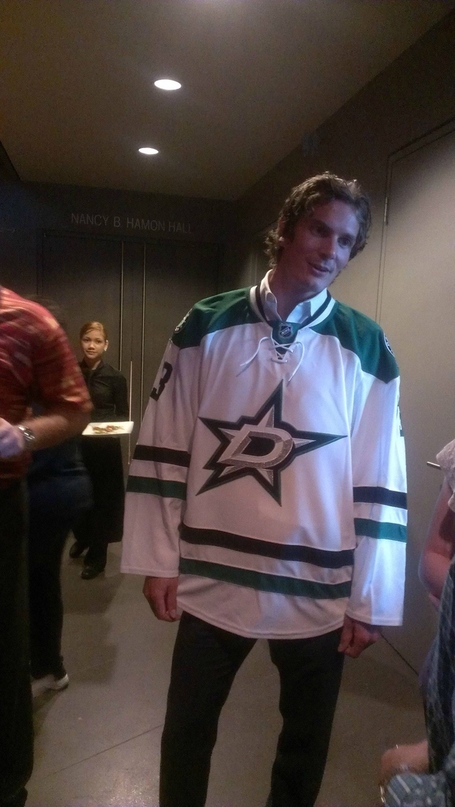 Finally, here's a really nice shot of Benn and Modano together -- courtesy of the fine folks at Icethetics: 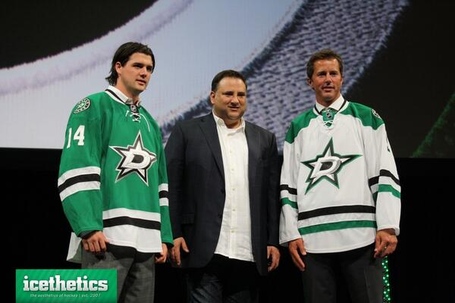 Another interesting aspect of the new look is the simplistic design of the numbers on the shoulders and on the back. There might be a few better ones out there from others, but these are the best I could get of the back and of the shoulder patch and numbers: 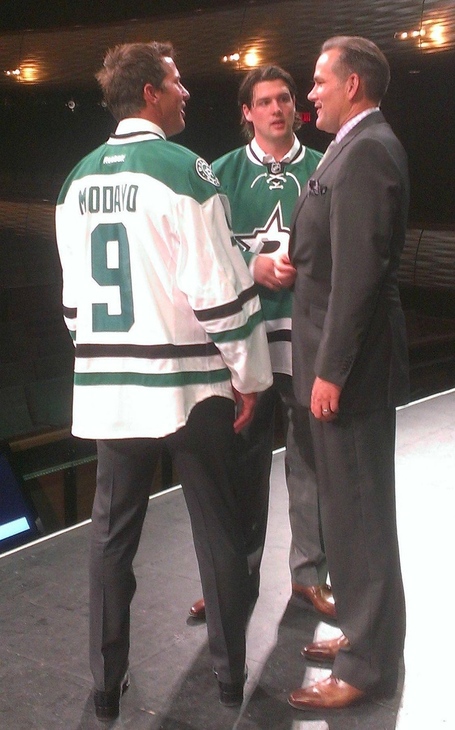 And the shoulder patch, which looks absolutely incredible in person. 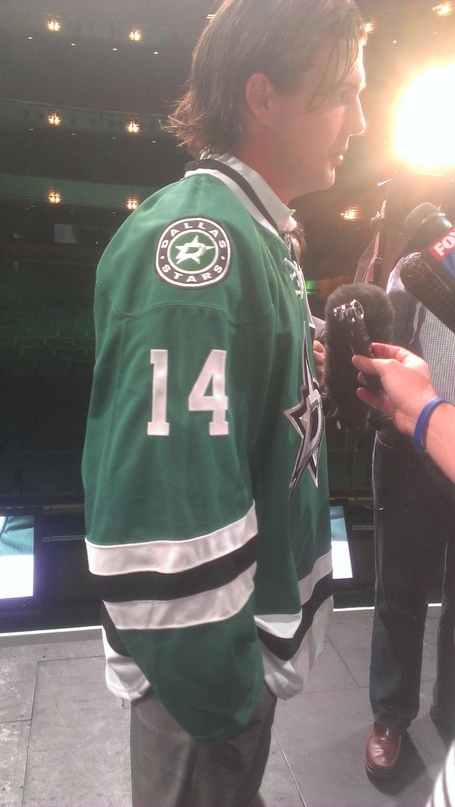 Once again, I really love the new look. I understand it's all about personal taste, and I respect everyone's opinion, but I think once we see these jerseys with pads underneath them and on the ice almost everyone will fully come on board. Change is always going to be polarizing, but I think most fans should be extraordinarily pleased the team listened to what they were being told and went with the green everyone desired.

More than anything, fans will be pleased if these new jerseys become synonymous with a winning culture and success on the ice. A flashy look is one thing, but getting back into the postseason and back to the winning ways the Stars had been known for is the paramount goal of this franchise. The jerseys look good, but they'll look even better when they're showing up on NBC Sports in the playoffs in 2014.