The Dallas Stars nearly went to a blue color scheme, according to owner Tom Gaglardi, before Mike Modano and a passionate fanbase changed his mind.

As the journey to new colors and a new jersey carried itself out, there were rumors swirling that the Stars were looking for not just new jerseys but a drastic color scheme change that would get away from the green, gold, black and white aesthetic the franchise has known for so long.

Darryl Reaugh had his infamous blog post that trumpeted a change to red, white and blue, which immediately sparked a very intense reaction from the core fanbase. Could the Stars actually consider a change from the green color scheme that had been with the franchise for so long? According to owner Tom Gaglardi, that situation came very close to happening.

"There were other possibilities," Gaglardi said on Tuesday night. "Blue was in the mix. Black was in the mix. Blue red and white were in the mix. That's pretty much it, there were really no other colors. There was a big push for Texas State colors and we had a good look at that and blue was a big consideration because of the sports teams in the market. But that's also one of the reasons we decided it was important to stay with green."

The Stars mentioned that the team wanted a color that was unique to the Dallas Stars and also had an identity in the state of Texas. Blue, especially the shade of blue they were considering, would have been very unique in the NHL and would have tied the franchise to the other sports teams in the Dallas area. 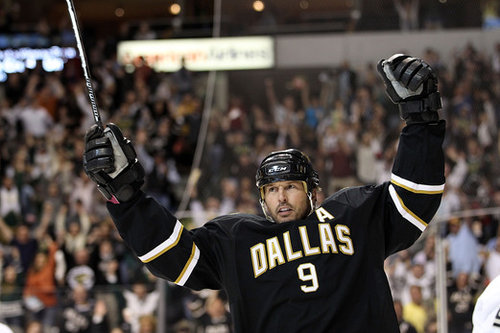 The Dallas Stars iconic #9 will be honored on March 8, 2014 when the Stars raise his number to the rafters before a game against the Minnesota Wild.

"We went everywhere," Gaglardi continued. 'I didn't think [green] is where we would end up. I thought we'd end up in a different place than where we did but I'm thrilled where we ended up. It was the right decision. I'm really glad from all the people we heard from. It made an impression on us for sure."

That impression came from the incredibly passionate cry from the Dallas Stars fanbase that the color green is what was universally desired and any deviation from that scheme would likely be met with intense negativity. The feeback from fans, here on Defending Big D and elsewhere, played a direct part in the decision that was ultimately made. Gaglardi listened to what the fans had to say and made his decision accordingly.

"Our core fans wanted green and I'm glad they did, I'm glad they said that," said Gaglardi. "I think it really made a difference in the mindset of our group because we were pretty focused on changing that. Sitting here today it seems a bit foolhardy, because I'm happy with where we are."

There was another big factor in sticking with green as the primary color, and he wore No. 9 for two decades with the Stars franchise. Mike Modano has become more and more involved with the franchise since his retirement, and when talking about the possible change to the color blue Gaglardi nodded his head in the direction of Modano and revealed who was ultimately behind the push to stick with green.

"You can also thank Mike Modano for the decision we made," Gaglardi then stated. "We were seriously considering blue, in fact it was this same jersey but blue instead of green with the same logo. Modano got me on the phone and he was adamant; he was not going to allow us to get away from green."

Modano, who will have his No. 9 retired next March in a game against the Minnesota Wild, spoke to us with a palpable passion in his voice when it came to the color scheme and how it important it was to him that the Stars stuck with the color green.

"I just always knew that it's something that every fan here, who has been with us from the start and have been around for years, knows that green has always been a part of it," said Modano. "It came from up north and it came from Minnesota and it's something that people recognize. I think, slowly over the years, we got away from that."

It was clear that Modano understands the passion that exists inside this fanbase and it's clear just how important this decision was to him and how much he wanted to get it right. Wearing the road white, with the green shoulders, Modano was once again clear that there was a very vocal group within the organization that did not want to go to another color scheme.

"[Gaglardi] was talking about blue, he was talking about something else and there was a few of us that felt really strong about trying to get green back in the jersey in some way shape or form. It's a good color, it's different. Obviously, no one else has it. That's the way it was with the North Stars, the green was unique and different. It shows good on TV, it pops really well on the white ice.