Where Do the Dallas Stars Go From Here? Part I

Jeff Angus takes a close look, from an outsider's perspective, at the future of the Dallas Stars as a summer of new beginnings gets underway.

Share All sharing options for: Where Do the Dallas Stars Go From Here? Part I

Stars fans are sick and tired of hearing about a culture change. We heard that the team needed a culture change from the Ken Hitchcock regime. We heard the same things about Dave Tippett, Marc Crawford, and now Glen Gulutzan. New GM Jim Nill mentioned the culture change in his introductory press conference. I'll touch on the Nill hiring a bit later (a great move for so many reasons, many of which have been covered at length here at DefendingBigD already).

Here's a bit more from Nill on what a good culture looks like.

"Knowing how to win, being accountable to yourself and to your teammates. Everything we talk about has to become a lifestyle. When you come to the rink, there's certain expectations, when you leave the rink, there's those same expectations. It's an everyday thing. When the season is over, that doesn't mean things change. That has to happen in the dressing room, that has to happen with the players. Your profession has to become a lifestyle."

As Mike Heika so eloquently wrote, culture is a nebulous word in the sporting world. Nill's words are right on, though. I'd say that creating a winning environment probably hits the point better than culture change does, though. The Detroit Red Wings have been so successful for so long because their players learn how to win from the first time they put on the jersey. It has been passed down from Steve Yzerman to Sergei Fedorov to Nicklas Lidstrom to Henrik Zetterberg to Pavel Datsyuk to Niklas Kronwall, and so on. Young hockey players, even if they have been successful at lower levels, don't understand how hard it is to consistently win at the NHL level, especially with the falsely created parity in today's game thanks to the salary cap and three point games.

Nill's vision for a strong culture is similar to something that Stars defenseman Brenden Dillon mentioned when I interviewed him last summer (before his fantastic rookie season). He was explaining the differences between junior hockey and the professional ranks.

The biggest thing overall is the mentality that the guys have. In junior, you go to the rink, you work hard, and you come home and play video games and hang out with the guys. At the pro level, hockey is a full-time job. Every puck battle, the attention to detail, I think that was the biggest [adjustment].

Look at the Edmonton Oilers as an example of a team that has failed to create a winning environment. They have relied on their teenage superstars to lead them, and the management failed to provide adequate support to those players. Taylor Hall and Nail Yakupov will both develop into sensational players, but because of how the Oilers have handled them. Great teams are patient with development, they don't promise or give ice time to rookies until they play a complete game, and they don't place any unnecessary or unneeded pressure or expectation on young players to produce.

And now the Oilers have completely missed out on benefitting from Hall and Jordan Eberle's rookie contracts (both players have contract extensions that start this fall paying them each $6 million per season). Having rookies on affordable contracts who can contribute to a winning team is one of the best ways to maximize the chances of success with a salary cap.

Pittsburgh and San Jose are both great examples of organizations that have created winning environments. HavingSidney Crosby and Evgeni Malkin has helped a lot, of course, but the Penguins immediately surrounded those two young talents with the right mix of veterans to help them develop into professionals - both on and off of the ice (Mario Lemieux for Crosby, and Sergei Gonchar for Malkin).

San Jose has done a phenomenal job with player development. Logan Couture is one of the best two-way players in the league, and even as a high 1st round draft pick, he didn't become a full-time NHL player for a full three years after his draft year (2007). 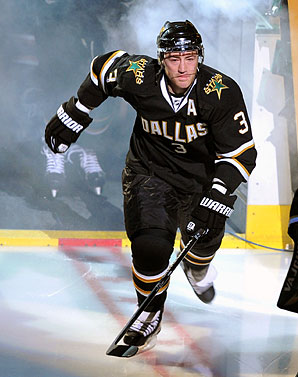 Ray Whitney and Stephane Robidas are both examples of veteran players that are required for a team to learn how to win the right way. Robidas has taken the young defensemen in Dallas under his wing, and his career is nothing short of inspirational (undersized late draft pick developing into a top pairing defenseman). Whitney's passion for the game carried him through many teams and ups and downs early on in his career, and he is still going strong at the age of 41.

Back to Nill. The Detroit Red Wings have been the model for success for so long. Ken Holland is one of the most respected voices in hockey. Canucks GM Mike Gillismodels a lot of his management ideals after Holland's (during his days as a player agent, Gillis really paid attention to how Holland ran the Red Wings).

And Holland and Nill have worked closely over the years to maintain Detroit's status as an elite club. The Wings, even without Lidstrom, made the postseason in 2013. They also boast arguably the most underrated collection of prospects in hockey. Gustav Nyquist, Brendan Smith, and Jakub Kindl have all made the jump this season.

Kindl spent parts of four seasons in the AHL. Goaltender Jimmy Howard spent six years developing before becoming Detroit's starter. The next wave of talent all has promise as well, particularly forward Calle Jarnkrok and defenseman Ryan Sproul. If the Wings stay true to their developmental model, don't expect to see either of them in the NHL for a little while, though.

One important point to note - Detroit has an incredibly dedicated owner in Mike Ilitch. One common denominatoramong all successful pro sports franchises is solid and committed owners. This post may seem like it belongs on a Red Wings site, but I'll tie it in with the Stars (both present and future) in the coming weeks.

Oh, and creating a winning environment returns 311 million hits from Google. Good thing the puck doesn't drop on the 2013-14 season for a few months. And if you manage to get through your reading homework, I'd recommend picking up ‘Behind the Moves' if you want to get an idea of how the best GMs in the history of the sport have managed their respective clubs. It is a pricey book, but incredibly interesting, insightful, and thorough. Oh, and it was written by current Dallas Stars executive Jason Farris.

Over the next few months, I am going to do a full scale organizational analysis of the Stars. The changes made in the front office, the goaltenders, the defensemen, the forwards, and the overall identity/system that the team looks to implement under the new regime.