We continue our closer look at coaching candidates for the open job in Dallas, moving on to three of the bigger names on the list this summer.

Today we move forward with our closer look at the top coaching candidates for the Dallas Stars open position, as GM Jim Nill likely conducts interviews and talks while also attending the scouting combine this week. Nill has stated that he won't disclose the coaches he's talking to, although two names have already leaked in connection to the Stars -- Alain Vigneault and Lindy Ruff.

This is an incredibly intriguing summer for the Stars to undergo such an incredibly important search for the next head coach, and one would assume Nill will take his time and talk to as many candidates as possible. One interesting aspect of this search is that it's not just about the "names" that are available, but all of the differing coaching styles that can be found throughout the list of candidates.

I do want to say something I think is important when looking at coaching candidates: Making a snap judgement based on postseason record or lack of Cup appearances for a coach is not exactly the right way to go about a search. There is more to it than just the track record a coach has in the playoffs and for a team like the Dallas Stars, this isn't about how quickly a Cup can be won but more about getting back to being a successful hockey team with a true identity and back into the postseason after five seasons without the playoffs.

Yesterday we took a closer look at two AHL coaches, Dallas Eakins and Willie Desjardins. Today, we'll discuss John Tortorella, Lindy Ruff and Alain Vigneault -- the three biggest names among all candidates and all coming off lengthy stints in the NHL.

Tortorella has perhaps the most extensive pedigree of all available coaches, having won the AHL championship with Rochester and then the Stanley Cup with Tampa Bay in 2004. His New York Rangers have been one of the top teams in the Eastern Conference the past three seasons but have struggled in the postseason, and after an incredibly disappointing second round exit this year he was fired by Rangers GM and is suddenly back on the market.

A fiery head coach that demands the most out of his teams, Tortorella is known for pushing his players to the edge of their limits. More than that, he's become known for his attitude and outbursts directed at the hockey media, as well as his contentious relationship with his players. Some call his style of coaching similar to that of a "dictator," and it's clear that his no-nonsense approach seems to wear out its welcome after a set number of years.

What's interesting are the reports that the Rangers weren't planning on firing Tortorella until talking to the players after the season, who apparently made it known they felt his approach was no longer effective. There's also the fact that he is so hard on his players from the onset of training camp, that he pushes his team so far during the season, that once the playoffs arrive the team has nothing left to give on the ice.

There are a number of red flags when it comes to Tortorella, especially when you consider the postseason performances of teams that were absolutely stacked with talent. The Rangers were expected to contend for the Stanley Cup this year and after struggling against the Washington Capitals in a seven-game series, New York floundered against the heavy offensive attack of the Boston Bruins.

So the question is whether Tortorella has the record he does as a coach because of the talent on the teams he's been in charge and whether that success is in spite of his coaching. Is his approach as a coach what a young and developing team like Dallas needs right now? Would Tortorella find the lack of media pressure refreshing and a new start welcome? I don't see this coach, no matter his long experience as a head coach, as the right fit for Dallas.

Ruff's claim to fame is his long tenure with the Buffalo Sabres, surviving long stretches without playoff hockey with only one Cup Finals appearance in that span. The Sabres missed the postseason six times during his time as coach, and have not advanced past the first round since 2007 -- including quick exits in 2010 and 2011.

There's truth to the fact, however, that Ruff was also victimized by some poor choices by his general manager and it seems this fact has gained him some leeway with the media when it comes to evaluating his time as coach. Ruff's name is constantly mentioned as one of the top coaching candidates for the available jobs right now, and as far as I can tell, the only redeeming quality he possesses is that he coached for a very long time and that he's well-respected around the league as a classy guy.

The simple fact is that Ruff has done nothing remarkable as a coach for a very long time, other than outlast every other coach except Barry Trotz. The NHL has changed drastically since the last lockout and with it coaching strategies have changed as well; teams are looking more for matchups and line deployment and zone matching and Ruff has not shown to have the tactical approach necessary to put his teams in the right position to succeed.

You can see here that the Sabres usage chart for this past season shows Ruff didn't find much reason to use his players in the role best afforded them: Steve Ott and Thomas Vanek both had roughly the same offensive zone start percentage against the exact same level of competition -- one is your third line checking center and the other is your cash cow scoring winger. 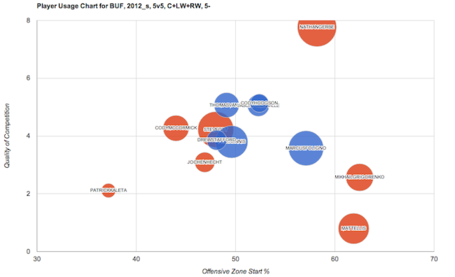 This is the same problems that affected the Stars and Glen Gulutzan the past two seasons, although Gulutzan certainly embraced zone matching more and more as he gained experience.

I'm going to steal a line from Cam Charron on this one: The Stars don't need just respect and experience, they need a proven philosopher and tactician. What exactly was the style and structure and "identity" of the Sabres the past five years? Just like with Dallas, it's tough to nail down as it was ever-changing along with their approach as a team.

Of all the names to be mentioned as possible hires for the Dallas position, Ruff is the one coach that inspires the least amount of confidence and excitement.

Vigneault is the other head coach on the list with a very impressive pedigree as a head coach at several different levels of hockey. We've discussed Vigneault several times over the past few weeks and the general consensus is that he is the top choice of Stars fans to replace Gulutzan, so we won't spend a whole lot of time rehashing what we've already discussed.

There are a few things to take notice of. First, Vigneault has coached some incredibly talented teams in Vancouver but has progressed out of the second round just once. Those disappointing finishes were what ultimately led to his dismissal, although there is a general thought that he too suffered from the poor choices of his general manager.

Vigneault is a tactician of the highest order, and commands the respect of his teams. There has been a lot of talk about how he distances himself from his players and how he's not as ingrained in the personal relationships with his players as some other of the top candidates on the list. What is clear is that his players still respect him and were incredibly gracious after his departure from Vancouver.

There are some warning signs, as there will be with any coach that has been fired. He seemed to tinker with his defensive pairings too often and created a lot of frustration with several of his players -- most notably Keith Ballard. He's said to be stubborn at times when it comes to adjusting game plans, and his teams have also had trouble protecting the lead in close games -- while playing in a relatively weak Northwest division.

Still, there's a lot to like about what Vigneault brings to the table as a coach and it's tough to look past him as the top option for the Dallas Stars. We just have to see if Jim Nill agrees, and whether Vigneault is even interested.