The Texas Stars are going green as well: The AHL club will trade in their all-black road jerseys for a primarily green model in 2013-2014.

The Texas Stars unveiled their new jersey designs Thursday for the 2013-2014 season as part of a fifth anniversary celebration, featuring big changes to the road sweaters in particular as the all-black look is out in favor of green as the primary color.

The announcement comes about two weeks ahead of parent club Dallas' announcement of new jersey designs as well as a new primary logo on June 4th, though only coincidentally. The two clubs are owned by different entities and the redesigns were done without coordination, so these cannot be taken as any kind of sign of things to come where the new Dallas jerseys are concerned.

I'll repeat that: These cannot be taken as any kind of sign of things to come where the new Dallas jerseys are concerned. 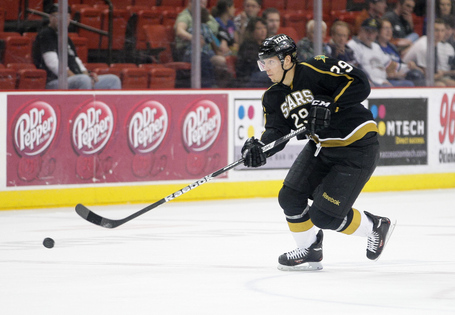 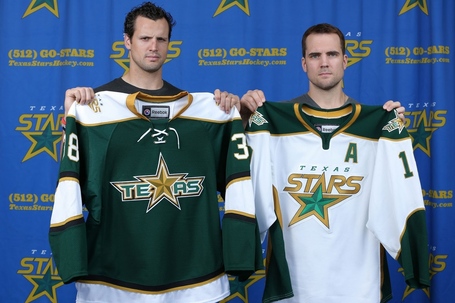 Francis Wathier just doesn't look happy about any of this.

From the team's release:

In preparation for the fifth season of AHL hockey in Cedar Park, the Stars will make a significant shift in their road jersey colors. Texas is replacing the all-black away uniform with a primarily dark green jersey, the same dark green that is featured in the team's logo, and the crest patch will feature the team's secondary logo. The shoulder cap is white with a primary logo patch on each side. The collar is gold and includes a white lace tie-up. The sweater will also have thick white bands on each sleeve and along the bottom hem, trimmed with black and gold. The matching socks will be principally dark green with three bands of black, gold and white just below the knee.

Texas' new home jersey is a jersey that was unveiled initially as the team's alternate jersey prior to the 2011-12 season. The jersey is a predominately white jersey trimmed in dark green and gold, emblazoned with the Texas Stars primary logo on the front crest. The shoulders are dark green and have small patches featuring the Stars' secondary logo. During the 2011-12 and 2012-13 seasons the team wore the alternate jersey with the original home socks, which were half white, half dark green, bisected by a thick gold band. The 2013-14 home uniforms will feature a newly designed sock of all white with bands of dark green and gold.

"We are very excited about our new jersey designs and we believe they will help our continuous efforts to strengthen the Texas Stars brand and team identity," said Stars president Rick McLaughlin. "We have enjoyed tremendous success on and off the ice over the past four seasons and we are really looking forward to initiating our fifth anniversary celebration with this great new look."

The new jerseys were designed by the Texas Stars in conjunction with Reebok, the official and exclusive jersey supplier to the American Hockey League. The jerseys will be available in both replica and authentic versions at the Texas Stars merchandise stands beginning this Fall.

For full coverage of the jerseys and all things Texas Stars visit Hundred Degree Hockey.