“He won’t stop talking, you can’t understand a word he says, and he’s constantly in your face,” Brenden Dillon said. “Trust me, you’d want to beat him up, too.”

The signing of Antoine Roussel this summer coincided with the signing of Toby Petersen, with both forwards receiving two year, two-way deals. At the time, not much was made of the moves. Our very own Brad Gardner said of Roussel in July:

Roussel, 22, spent last year with the Chicago Wolves of the AHL and racked up 177 penalty minutes in just 61 games, adding just 9 points and a -13 rating. He's a tough guy and a depth signing for the AHL club. This might be a good point to remember that the Stars bought out Eric Goddard last week. Roussel, born in France, went undrafted. He had a tryout with the Bruins a couple of seasons ago but has had little to do with the NHL from what I can see otherwise.

His presence will allow Francis Wathier and Luke Gazdic to focus their attentions elsewhere, rather than on the pugilistic arts.

"Pugilistic arts" is a nice way of saying ‘fighter.' Roussel certainly did not disappoint on that front when he started the season off with the Dallas Stars' affiliate, the Texas Stars, down in Austin. He racked up over 100 penalty minutes in just 43 games played, the most of anyone on the roster during the regular season.

The first time I saw Roussel in action was in Oklahoma City in December, where he managed to draw Taylor Hall into just his second ever pro career fight. The way that he drew Hall in wasn't by asking him to go - all Roussel had to do was play a physical game, with plenty of verbal chirping between plays and find a way under the skin of the opposing players. This kind of play was expected from an AHL depth player. His notching points was seen as more of pleasant bonus for a guy most expected to be a fourth line grinder/fighter type. After spending two seasons at the AHL level averaging only about eight points a year, Roussel scored eight of his eventual 19 points in Texas during the month of January alone.

Roussel was called up to Dallas just eight games into the big club's season at the same time as Jamie Oleksiak. While many talked about the much anticipated debut of Oleksiak at the NHL level, only minor pause was really given to Roussel being the forward the Stars recalled. Other forwards in Texas were perceived to be more NHL ready, so calling him up in front of those guys turned a few heads. Comments about his hard work ethic and willingness to do anything to help the team floated around as a reason he was given a shot. There was also the fact that the NHL roster at the time didn't really have that "pest" type player, and in the midst of a losing streak, it's not unheard of to try to find that spark plug to shake things up a little.

On just his third NHL shift of his career, Roussel would take a Garbutt pass and beat Mike Smith for his first NHL goal. It was a beauty:

Roussel played the game with an edge - not only would he battle hard for the puck, he wasn't afraid to drop the gloves for his team either. His fight card at the NHL level may not be long, but it is impressive already: Jarome Iginla, Zack Kassian, Chris Stewart, Shea Weber, Brent Seabrook. While Roussel didn't always win these fights in the eyes of public opinion, the fact that he wasn't afraid to go in as a rookie and take on guys that had several inches and quite a few pounds on him made Roussel an instant fan favorite.

His game is a little bit more than just goals and fights, however. Roussel showed that he is a versatile forward - he played center and wing both in Dallas at times, played on the penalty kill, can scale up the lineup and not look completely out of place, is actually effective on the dot (~56% faceoff win percentage) and plays hard every shift. Comparisons have been made that cast Roussel as a younger Steve Ott-type player. After watching him this season, it is a fair comparison to make and there are definitely a lot of parallels with what Roussel brought to the table and what Ott brought to the Stars the last few seasons he was here. He may not have the advanced possession stats showing he pushes the play, but there is no denying that he found a role in Dallas this season.

The real question now is: is it enough to keep him on the roster moving into next season? An argument could be made that Roussel and Ryan Garbutt present as two players with similar skill sets, providing a redundancy that may not allow for both to stay on the roster in Dallas. Garbutt is on a one-way deal signed through next season, while Roussel's two-way deal also sees him signed through next year. Will Roussel's versatile play and hard work ethic this season be enough, or will he become a victim of contract status and redundancy and spend time in Austin again next season? We won't know until after training camp next season. One thing is for sure, though - Roussel's play this year was a very nice surprise and another example of Dallas' ability to find some hidden gems in the undrafted ranks. And any time you have this going for you, it makes for a fun time: 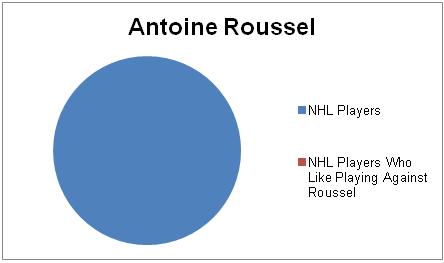