We take a look at Cody Eakin, who had a surprising 24 points in the lockout shortened season in his first year with the Stars.

Not many knew what to expect from from Cody Eakin, when he was acquired from the Washington Capitals just before the draft in exchange for Mike Ribeiro. The Dallas Stars were obviously looking to move on from a core of players that had once again underwhelmed that season, as well as to get younger, and Eakin was expected to be a big part of that future.

At the time of the trade, it was cautiously optimistic that Eakin could develop into a solid two-way center that would be a good option on the third line. Our own Erin Bolen summed up the trade by stating that Eakin had earned comparisons to Maxime Talbot and that around 25 points a season would have been a reasonable expectation for the young center in his first few years with Dallas.

Drafted in the third round in 2009 by the Washington Capitals, Eakin had put up some gaudy numbers in the WHL, including 91 points in 70 games in 09-10, and 83 points in just 56 games in 10-11 between two teams. Eakin was rated as one of the top 50 prospects in the NHL heading into 2012, yet he struggled to live up to expectations once he was playing in D.C. Just eight points in 40 games had some questioning whether his offensive talents would transfer to the higher level of play.

Said Corey Pronman of Hockey Prospectus after the trade:

Cody Eakin, Center, Dallas: Eakin was decent in his first pro season and as a guy who last year thought he looked like a legit top six talent has at least made me question that somewhat this season although I still like him. He's a high-end skater with a great on-ice work ethic and a plus shot. He has a solid skill level too but I think next year he's going to need to show more offensively if he starts at the AHL level.

With seven goals and 24 points in all 48 games for the Stars this season, Eakin emerged as perhaps a bigger offensive threat than many expected. The Stars offense was erratic and inconsistent for much of the season, starting off as one of the lower scoring teams in the league before putting up some gaudy numbers for a good chunk in the middle of the year.

Eakin was used primarily on the third and fourth lines this season and showcased the consistent high-energy, high-work ethic style he was touted with after the trade. There were many nights were Eakin and his linemates became the players driving play for the team, with Eakin the standout in both the offensive and defensive zone. Eakin embodied a "swarming" style of play and rarely had a true "off night."

It's easy to say that Eakin was one of the major bright spots for the Stars this season.

The young center also proved his versatility this season, ranging from the third line up to the second and first lines for short stretches in the season as injuries warranted. While Eakin might never make the grade as a top-line scoring center in the NHL, he certainly showed capable of being an effective option for a top-six role when the need arises.

Would Eakin be capable of becoming a full-time top-six center? It's still tough to say at this point. Compared to the other centers on the team, mainly Jamie Benn and Eric Nystrom, Eakin was used against relatively weaker competition while getting 54 percent of his starts in the offensive zone. Let's see how Eakin compared to rest of the Stars' forwards in this regard: 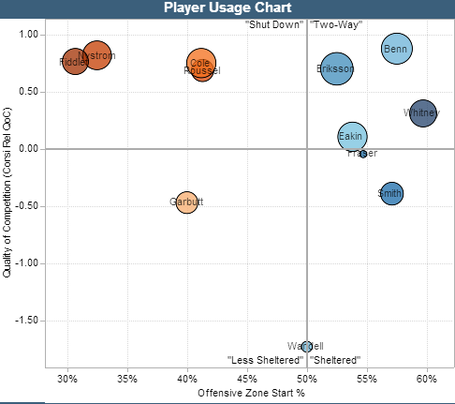 Last season with the Capitals, Eakin struggled with his possession numbers after the change to Dale Hunter as coach, and this season it seems his numbers averaged out a bit. Sitting right in the middle of the Stars forwards, Eakin put up a 47.7% Fenwick percentage, which was lower than Whitney, Smith, Eriksson, Benn, and Ryant Garbutt -- but significantly better than Vernon Fiddler. This is also reflected in what the CorsiRel above tells us.

The key is here is that of all of the centers currently on the team, Eakin accomplished this against the easier competition. To his credit, however, Eakin also posted the second-highest GVT of all forwards -- second only to Ray Whitney, who was clearly the best forward for the Stars this season.

So where does this leave Eakin moving forward? I think it's safe to say that Eakin surprised many of us this season and that his tenacity and energy were traits that had been missing on a consistent basis the past few years on this team.

Eakin's value will likely never hinge on his ability to be an elite scoring center, but this season he showed the potential to be more than just a 25+ point-per-season third line forward. Adjusted for a full season, Eakin might have managed more than 40 points in just his second NHL season.

With the Stars likely bringing younger players up through the ranks in the coming seasons, Eakin is in prime position to grow along with this team and continue to be a major piece of this franchise for years to come.