Jeff Angus sits down with the Dallas Stars strength and conditioning coach to talk nutrition, training and hockey.

Brad Jellis is in the middle of his second season as the head Strength & Conditioning Coach with the Dallas Stars (he took over from JJ McQueen, who was promoted to the position of Player Development Coordinator). A British Columbia native (like yours truly), Jellis has been in the Stars organization since 2007, where he first started working with the ECHL affiliate in Idaho.

Jellis has a Master's Degree in Sports Science (you can read his fill bio here), and he has been in and around the game of hockey for a long time. I interviewed Brad last week, and picked his brain on fitness, nutrition, and hockey-specific training (among other things). We also talked about Kari Lehtonen and Jaromir Jagr, two players who are great examples of the benefits of a focus on nutrition and training. Lehtonen's career has taken off after he rededicated himself off the ice to a healthy lifestyle, while Jagr continues to go strong at the age of 41 because of his diligent and focused training regime and commitment to health and wellness.

Angus: Where did you get your start in the hockey training world? 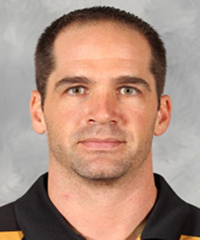 Growing up in BC, hockey has always been a part of my life. Once I was done playing hockey, i knew I wanted to stay involved. I chose to become an Athletic Trainer. My first job in pro hockey was working as a Athletic Trainer in the ECHL. I spent two years with the Fresno Falcons and two years with the Idaho Steelheads. While in the minors you are not only the trainer, but you also oversee the team's strength and conditioning. I was then hired by the Dallas Stars to work as the Athletic Trainer for their AHL team in Austin. I spent one year in Austin and then was brought up to Dallas to be the Assistant Strength Coach. The following year I took over as the teams head Strength Coach.

How would you describe your overall training philosophy?

The main thing is to try and keep the training safe and simple. I am training hockey players, not weight lifters. Exercise selection has to be about what gives you the most bang for buck, while also being safe and geared towards the sport. I also put a lot of emphasis on the players warm up; self-myofascial release work, static and dynamic stretching, and mobility and activation.

The final thing is to promote the importance of recovery and nutrition.

Some more on dynamic warmups:

What is your level of interaction like with Stars players during the offseason?

[Gary Roberts has worked with a few of the younger Stars over the past few years, including Brenden Dillon, Alex Chiasson, and college prospect Alex Guptill.]

How about nutrition. What is your role with the players like regarding diet and what to eat?

We try to promote sound nutrition to our players. Luckily at the NHL level we have the ability to provide daily meals. We have an in-house chef while we are at home and have catered meals on the plane and hotel while on the road. We work with a nutritionist to set up our meals and snacks that we provide for the team.

I dug up a video of him doing some grocery shopping for the Stars while on a road trip:

Have there been any unique challenges with in-season training this season because of the compressed schedule?

The biggest challenge has been balancing the right amount of training and recovery during this busy schedule. Before we got started I met with the coaches and mapped out our entire training and practice schedule for the season. My main focus has been making sure that the players are recovered and ready for the next game.

I noticed recently that the Stars were one of a few teams that signed an agreement to wear Skins compression gear. What areas do you notice the benefits – travel? Recovery?

All of our players are wearing the Skins recovery pants after games and on the plane. The players have been reporting that they are recovering quicker between games. I believe that every little thing helps.

[Although the jury is still out on the scientific benefits of compression gear, it is great for flying, as it promotes blood flow and prevents swelling.]

What are some of the unique demands that hockey places on its athletes relative to other sports?

Hockey is not only a physically demanding and rough sport, but players but be prepared to play up to four games in week with travel between each game. With an 82 game schedule, players must be devoted to their training, recovery and nutrition.

Kari Lehtonen has taken huge strides forward with his game since coming to Dallas. A lot of that is due to improvements in fitness and nutrition (or so we have been told). What has it been like working with an athlete like him?

Kari has become a different individual over the past thee or four years. It has been great being part of a team that has worked to help him realize how important fitness and diet can be to his on-ice performance and overall health.

Helping him reach his potential and become the elite goalie he is today is what makes the job great.

How about Jaromir Jagr? Have you seen a pro athlete with his off-ice dedication/commitment before?

Jagr is definitely a unique and impressive individual. That amount of dedication that he has far surpasses any other player that I have ever worked with. He is constantly thinking about how he can improve his training on and off the ice. Working with him opens up some ideas and makes me think about how i can improve my training and programs. The extra time that he puts in is the reason that is still an elite player at the age of 41.

Thanks for the interview, Brad.

The media sometimes overlooks or neglects the training/nutrition aspect of pro sports. The importance cannot be overstated - just look at Lehtonen as an example. He always had the talent, but his body was breaking down every season because he wasn't fueling or recovering properly (through a solid diet and a dedication to fitness). It amazes me that teams can make such significant investments in these young players without dialing in their diet, fitness, and overall approach to well-being and improvement, both on the ice and in the kitchen.

Matt Duchene has gotten his career back on track after enlisting the help of Andy O'Brien, Sidney Crosby's longtime trainer. Here's a look at some of the fittest players in the NHL (and, not coincidentally, some of the best players, too).