Rob Vollman has added another useful feature to his Player Usage Charts. Now, they're customizable and you can generate your own quickly.

Player usage charts began to be en vogue during the 2012 season. They convey tons of information about individual players to add context to the individual performance of your favorite player.

Rob Vollman has put some work in to bring Player Usage Charts to the masses. Prior to the season he put out a full list of Player Usage Charts for all of the teams in the NHL. His most recent contribution is making fully customizable charts available for anyone who wants to generate one.

If you follow this link you will be taken to hockeyabstract.com where you can customize your own chart to see how particular players are being used this season. 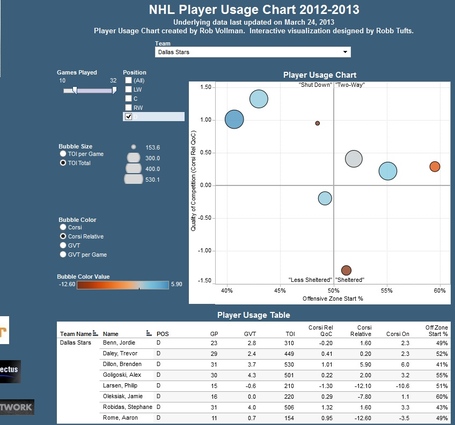 A sample chart of all Stars defenders

The interesting features of this interface are the options given to filter players by position and games played. It really clears the charts up and helps you focus on what in particular it is that you want to know. The other thing I really like about what they have done is the option they added that allows you to switch between Hockey Prospectus' GVT and different Corsi-types for the production bubbles on the charts.

If you have some time swing by and check it out. Rob has done a lot of work to bring these to the public with easy access. There is a wealth of information from which to learn at your fingertips. If you swing by make sure to let Rob know what you think about the chart generator. He always welcomes constructive feedback, and I'm sure he would love to hear what you have to think about it.