Another disappointing season ends once more, this time with the Dallas Stars firmly looking to the future instead of pinning short-term hopes on the present. But how are we supposed to feel about it?

Time to take a deep breath and reflect.

The past few days have been a whirlwind, as the Dallas Stars shipped off Jaromir Jagr, Derek Roy and Tomas Vincour. Along with the trade of Brenden Morrow, the moves signaled a finality of sorts to one era and the definite beginning of another and for the first time in the history of this franchise the Stars are truly heading down the path of the proverbial "rebuild."

In many ways this week has been angering and has left me sad, frustrated, annoyed and slightly depressed. Wednesday night marked the first game since I've been a Dallas Stars fan where I really could not have cared less about the outcome -- to me, it was all about the young players and how they fared and how the team might look in the future. That was my mindset about the game, in the middle of April, and it was a strong, strong dose of reality.

There's a lot of talk of "waving the white flag" and that the Stars have "given up" on this season but that's simplifying the situation just a bit too much, in my opinion. Instead, it showed that the Stars management decided to come to terms with a very bitter reality and instead of pinning hopes and dreams on another long shot, it was time to cut the losses and finally move forward.

It's one thing to completely understand the situation from the very start, to know that any hopes of reaching the postseason and using the 2013 season as a short-term run at glory was always going to be a near-impossible goal -- and then to see that reality come crashing down around you. Part of me wanted to be proven wrong, that perhaps my slightly-pessimistic view of this whole thing was being unfair to the vision of Nieuwendyk and the Stars.

After all, I completely understood what they were attempting to accomplish -- I was on board with the plan, even if I was skeptical how it would play out. Perhaps I bought in too much, perhaps I wasn't being realistic enough and perhaps that's why many of wake up this morning with an odd taste in our mouth feeling incredibly and completely uncertain about what the future will bring for this franchise.

Yet, at the same time, that uncertainty also has us excited and the hopes that we might have had for this season -- or even the next -- instead get pinned on these young players and the idea that perhaps with a fresh start the franchise can really start to be put back together again, and properly this time.

Each season we looked at a roster that was slightly more diminished than the one before it, trying to convince ourselves that the team was better than it perhaps never had been.

What is a "rebuild" and what exactly does that mean? This is a term that gets tossed around a lot and over the past few days I've been thinking about a rebuild and how it applies to the Dallas Stars and whether this is the path that should have started three years ago instead of in 2013 -- and whether the process has already been well underway.

For the Stars, it means finally embracing the need to completely rethink this hockey team from the top down and finally determine just what sort of franchise the Stars are going to be moving forward. For too many years the Stars have tried to remain competitive with piecemeal rosters, filling gaping holes with stopgap fixes with the hope that maybe, just maybe the team could finally figure things out and get back to the postseason.

The Stars may not have been a dominant team but it's clear just how much they valued short-term success while still trying to look to the future. Unfortunately, the short term success never manifested itself and now we're left with absolutely nothing to really hold on to from the past five years except bitter memories, frustrations and "what if" thoughts floating through our heads while talking ourselves into the idea that at least we have the future to look forward to.

Perhaps the biggest of them all: What if Tom Hicks had never gone bankrupt? What if the banks had not pulled the rug out from this team? What if the Stars had found better coaching and a more significant and distinct structure and identity?

Even a few first round exits would have been better than what we've received.

Each season we looked at a roster that was slightly more diminished than the one before it, trying to convince ourselves that the team was better than it perhaps never had been. Then reality would hit and the Stars would once again be caught in no-man's land in the middle of the pack and never able to really find that next gear that even okay teams seem to find at times to get into the postseason.

Yet all of the blame can't fall on the players and the roster. After four years, it's clear that the Dallas Stars just haven't had the coaching in place needed to pull off the plan that Nieuwendyk set forth to accomplish. Perhaps that's why this season has been so frustrating, that the team showed zero improvement and growth and many of the systemic issues plaguing the Stars can almost all be laid directly on the coaching.

So, once again, I think it was clear what Nieuwendyk and company were trying to accomplish. During the bankruptcy years it was the thought that perhaps the situation wouldn't last that long, that just because we had one season with reduced payroll didn't mean that would be the long-term prognosis of the franchise. After all, what if the Stars had just $8 to $10 million more to spend in 2011 or 2012? What if Brad Richards could have been retained? So many things out of the control of those in charge that directly influenced the decisions being made.

While we can look back and say the rebuild really needed to begin with the departure of Modano, Lehtinen, Zubov and Turco making that decision in the moment was almost impossible.

This was always going to be a season in transition, with the Stars bringing in a number of skilled veterans to help aid the growing move to younger players. The acquisition of Derek Roy was also a gamble for the future, hoping that a talented No. 2 center could be found to stick behind Jamie Benn for the next four or five years. This was never going to be a Cup contending team and even the most optimistic among us knew the postseason was a long shot.

It's not just about the fact that the playoffs are now grossly out of reach, however -- it's about how this team got to this point in the first place. Trying your best, completely living up to your potential and still falling short -- that is commendable. That is something to pin our hopes on, to look to the future and say "it's frustrating now but just look -- the pieces are there, the structure is there, we just need some time to put it all together."

Instead, the season was about regression and a clarity that this current coaching staff likely doesn't have what it takes to grow and build a contending team along with the changing roster.

And now, instead of a transition from the last player regime to the next and what should have been building on a disappointing yet slightly hopeful season -- we're left with what seems to be a true restart, a return to the starting line that makes it known that the success we've been itching for the last five years is not any closer than it was when this season started.

What's interesting is that the trades of Jagr, Roy and Morrow were something we all should have been prepared for and known could be coming. Jagr and Morrow are not part of the future and while Roy staying seemed like a good possibility -- there was always a good chance this would be how it played out.

But when you put it all together -- the embarrassing losses at home, the energy-deficient performances in big games, the lack of growth by the coaching staff and the struggles of Benn, Eriksson and Lehtonen -- you have a very depressing season to look back and a very clear reason why this truly is where the rebuild begins.

The good news is that all hope is not lost. The Stars are starting over with the cupboard already mostly-full and certainly not completely empty. While a number of the big-name prospects might still be a year or so away there's already a promising group of players fighting their way to the NHL, and on Wednesday night we got our first taste of that future and there was some very good signs of what could be coming. 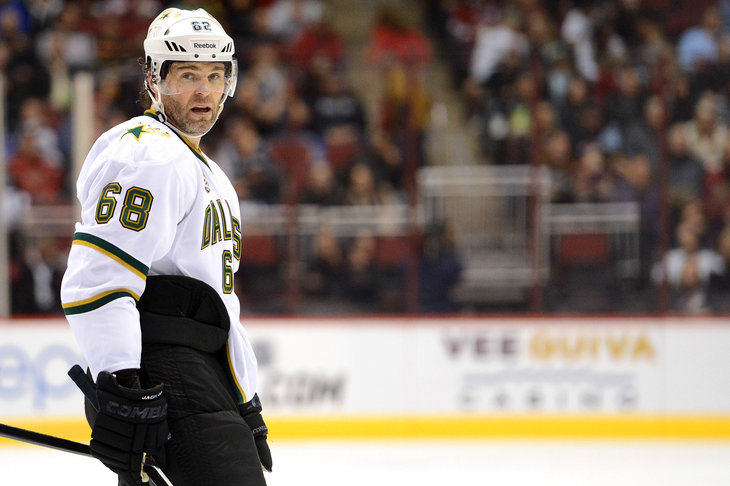 The Dallas Stars made the two trades we've been expecting, yet the overall return was incredibly underwhelming. What was the strategy behind these moves and what do they mean for the franchise overall?

Joe Nieuwendyk, if nothing else, has led a charge to reset the prospect pool and organization as a whole. This entire fiasco of the past five years might have been avoided if the previous regimes had put more stock into the draft and developing young players; we certainly found some gems but too many wasted drafts over the past 15 years had left the franchise completely empty when the need arose to restock the NHL roster -- when money was no longer an option.

This is a complete and fresh reset for the organization and while the system is lacking a few of those true "blue chip" players we'd all love the Stars to have, there's no denying that Nieuwendyk has put together a group of prospects from which only the best players will be pulled -- the absolute best organizations are the ones that have actual competition among a number of promising prospects.

No longer is this about Garrett Stafford, Ray Sawada, Maxime Fortunus and Travis Morin. This is about Alex Chiasson, Brett Ritchie, Matej Stransky, Joe Morrow and Jamie Oleksiak.

So, perhaps we should all look upon this as a good thing and an exciting time. The Stars have truly embraced the notion of building from within, of looking at the big picture and working towards building a long-term contender. There's going to be a new coaching staff next season, almost assuredly, and there's a chance there could be a new general manager as well (I doubt it).

There's still an incredible amount of uncertainty about the future and we all know there's no guarantees that the decisions being made moving forward will be the right ones. We hope they are. We hope that lessons have been learned from past mistakes.

We wake up this morning with the dawn of a truly new era for the Dallas Stars. As tough as it is to think of having to start this game all the way back at the starting line, it's clear that this restart is what was needed all along.