As the Stars prepare to usher in a new era with a new general manager, we look back at Nieuwendyk's time with the franchise and what his legacy will ultimately be defined by.

The departure of Joe Nieuwendyk as the Dallas Stars general manager this past weekend was not surprising. The writing had been on the wall since the day after the trade deadline, when another series of questionable decisions left many scratching their heads. While many felt that perhaps another year was deserved, an actual full season with an owner financially supporting his decisions, the opportunity to hire Jim Nill outweighed any sense of obligation to give Nieuwendyk another chance to prove himself.

Nieuwendyk's tenure as the Stars general manager will be one that likely won't be remembered as fondly as perhaps he deserves; a four-year period where the Stars failed to make the postseason and the NHL product on the ice never came close to matching the high expectations of a demanding fanbase.

RDS: Glen Gulutzan Will Not Return As Stars Coach 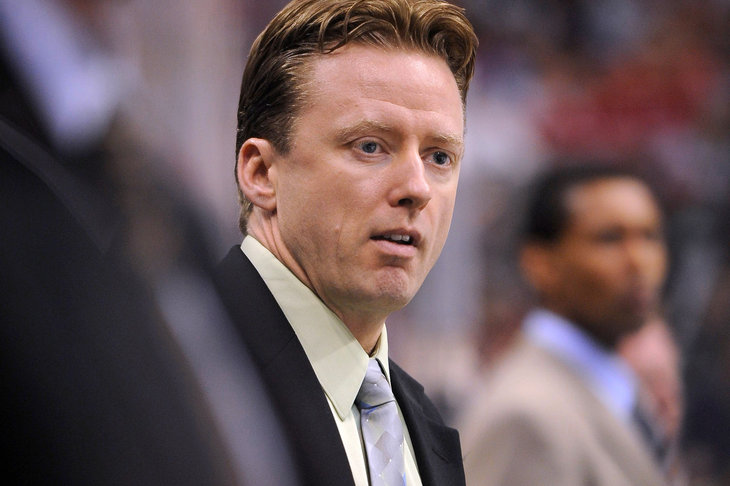 Competition with the Colorado Avalanche as new division rivals could start in the off-season with both potentially needing to fill head coaching vacancies.

Our time here at Defending Big D has been almost entirely defined by and associated with Nieuwendyk's tenure with the team, as he was hired just months after the site was launched. The change occurred after the Stars missed the postseason for just the second time since coming to Dallas, and it was felt at the time that this was a team not quite far off from returning to the greatness of a decade before.

When Nieuwendyk was hired on May 31, 2009, it was with the thought that he could reinvigorate a franchise that had just suffered through a wholly disappointing season fresh off the heels of an appearance in the Western Conference finals. At the time, it was felt that some new blood needed to come into the franchise and bring a new and different energy to the team and perhaps push the on-ice product into a more modern approach that reflected how the NHL had changed since the last lockout.

Here is what I wrote the day after Nieuwendyk was hired:

So what should we expect from Joe Nieuwendyk as the Dallas Stars General Manager? For one, he is certain to immediately work to instill his ethics and hard working style amongst the organization, something that won't be hard to do on a Dallas Stars team that is already known for it's grit and determination. More importantly, he should give this team a big breath of fresh air from a former Stars every single player in the locker room has an incredible amount of respect for...

Yet this hiring is no slam dunk for the Dallas Stars. He has yet to prove his player-evaluation skills, nor has he shown the ability to make valuable trades. But that is the gamble you make when hiring a first-time general manager and honestly, you have to have faith that Nieuwendyk has the ability to do what needs to be done.

Tom Hicks spoke of the hiring as one that was needed to instill some "hunger" into the franchise, which was thought to be needed at the time for a Stars team that had apparently become complacent and had suddenly tuned out long-time head coach Dave Tippett.

"We have been very good for a very long time here, and it just felt like maybe we needed a different push, a little more hunger," Hicks said of hiring Nieuwendyk, who had been retired as a player less than three years. "I think in watching Joe and what he has done already, it's very evident that he's helped restore that hunger."

Hindsight is certainly interesting, isn't it?

The first questionable decision that will sit at the top of Nieuwendyk's legacy was the one to replace Dave Tippett with Marc Crawford. Tippett had been incredibly successful with the Stars and had missed the postseason just once, in a season where both Brad Richards and Brenden Morrow suffered significant injuries and the Stars could never quite find the depth to overcome such losses -- especially as Marty Turco's play began to suffer.

Yet Nieuwendyk was hired to push the franchise in a new and different direction, and Crawford was supposed to help usher in that change. This was a franchise that was supposed to become more aggressive on offense and more potent on the power play, a "more exciting" team that could compete with the high-flying teams across the NHL in the post-lockout era.

The attempt to pull away from the traditionally-defensive style the Stars had been known for so long (check out the name of this site), four years later, is still not nearly as successful as it was supposed to have been. Crawford was a coaching disaster, someone who understood how to compose his gameplan and deploy his lines yet incapable of having any sort of actual relationship with his players. Nieuwendyk then went in a completely different direction, promoting Glen Gulutzan from the AHL as a "player's coach" that could inspire the team and instill the same hard forechecking style that had been so successful for him down in Austin.

While Gulutzan certainly showed improvement and growth during his two seasons as coach, the experiment of the young and inspirational young coach never quite worked out. He was never able to connect with his team as it was expected he'd be able to do, and too many times the Stars showcased an incredible lack of focus and energy when the team needed them the most. That the best stretch of inspirational hockey from this team came when all expectations had been lifted, and likely much too late to save either Gulutzan or Nieuwendyk their jobs.

There will be much written and discussed this summer about the trades that marred Nieuwendyk's tenure as general manager, a series of moves as the team was dismantled and rebuilt that were defined more by what came back to the franchise than the actual trades themselves.

While losing James Neal is certainly tough looking back, at the time it was an understandable decision for a team in desperate need of a puck-moving defenseman that had strong depth on the wing. Yet Nieuwendyk took a risk in the player received in return and while Alex Goligoski has done his best to live up to the expectations placed upon him, it's safe to say that this will be a trade that haunts the Stars for quite some time -- no matter how much most of us never want to discuss it again.

Like the James Neal trade, the decisions to move on from Jaromir Jagr, Derek Roy and Brenden Morrow were certainly understandable -- yet it was once again the questionable returns for such a haul that will define those moves, and most likely negatively. Nieuwendyk had become known as a GM that was unable to gain the value most expected in these big trades and for a team that has been undergoing a slow rebuild, such a reputation was not one this franchise needed to maintain.

There will always been an asterisk next to Nieuwendyk's time as the general manager that directly influenced all of the negativity above, and it could be said that he was handed an impossible task. An aging roster that had been built as a cap-ceiling team suddenly needed to be maintained with a barebones budget and farm system that produced just three lasting players -- Jamie Benn, Richard Bachman and Philip Larsen. The ability to restock the roster through free agency had disappeared and there was no deep prospect pool to choose from to supplement the dwindling talent on the NHL team.

While the task was tough, the decisions along the way never quite added up. Perhaps Nieuwendyk's legacy will be defined more about the team's lack of apparent identity and direction than any actual trades made or not made. In four years, it's tough to define exactly what the Dallas Stars were all about. Everything felt temporary, as if we were all just waiting for the pieces to actually fall into place when none such occurrence ever happened; year to year, season to season, the Stars continued to attempt to redefine what they were as a team, a confusion that stemmed from a lack of direction at the very top of the chain.

Despite the negativity, t's important to focus on the positives that Nieuwendyk brought to the franchise instead of dwelling on what could have been. He was focused on restocking the organization and as he departs, the Stars possess one of the deepest prospect systems in the NHL. The Texas Stars have become an incredibly successful organization and the future is bright because of his direction.

He made the tough choice to move on from Tim Bernhardt and turn the draft fully over to Les Jackson, who has shined in that role. More importantly, Nieuwendyk pulled the trigger on several trades and moves that have actually worked out great -- including the acquisitions of Kari Lehtonen, Cody Eakin and Brenden Dillon.

For some, it's tough to separate Nieuwendyk the player and Nieuwendyk the general manager. His career in Dallas as a player for the Stars influenced our hope that he would be the one to deliver the franchise back to glory, and it's clear that he was hired at the time because of how respected he had become around the league. Nieuwendyk was a Hall Of Fame center, the Conn Smyth winner for the Stars in 1999 and a major reason this sport and this franchise had become so successful.

To see him fail as the general manager is tough. Another year of a late-season tease-and-collapse, the reluctance to pull the triggers necessary when needed and the growing apathy of a shrinking fanbase has become too difficult to ignore, however.

What ultimately doomed Nieuwendyk was his apparent inability to approach the job with the killer instinct the best in the business have to offer. A incredibly classy person away from the office and the ice, Nieuwendyk felt it important to give departing players the best situation available for them and to make it known the Stars would do what was right for players on their way out. Unfortunately, this approach hamstrung his own franchise by failing to secure the proper value in return that would legitimize the trades and moves he would make.

There was also an apparent aversion to truly take risks, or perhaps to play it too safe with the risks that were taken. Too many middle-ceiling/high-floor players were acquired instead of the risk that true elite talent could bring to the franchise -- shown mostly by the four first-round draft picks during Nieuwendyk's time as general manager.

Joe Nieuwendyk had a rollercoaster of a career as the Dallas Stars general manager and even for his staunchest of defenders, it was clear that the time to move on in a new direction had come. It's hoped that Jim Nill will be able to do what Nieuwendyk could not, instill a sense of defined identity in a franchise that has been rudderless for too long.

In the end, it was all about results. Despite the handcuffs placed upon him, teams are expected to win. In Dallas, this means making the playoffs and five straight years without the postseason have set this franchise far back from the heights of glory of less than half a decade ago. The Dallas Stars were perpetually locked into mediocrity, and the lack of success was ultimately impossible to overcome.