Who Has Been the Best Dallas Stars Defenseman in 2013?

Jeff Angus takes up the question of who has been the top defenseman for the Dallas Stars this season and the answer might not be who you'd think...

Share All sharing options for: Who Has Been the Best Dallas Stars Defenseman in 2013?

That being said, there have been some very good performances, most notably from the young players. Let's look at the back end and see who stacks up as the best defenseman for the Stars in 2013.

The numbers back up what we see (the majority of the time). Sometimes they don't, and this leads to statistical manipulation (and at the other end, a complete ignorance towards said statistics). And I didn't need to consult Behindthenet.ca to pull advanced stats to figure out that Stephane Robidas, Trevor Daley, and Brenden Dillon have been given the toughest minutes and assignments this season. 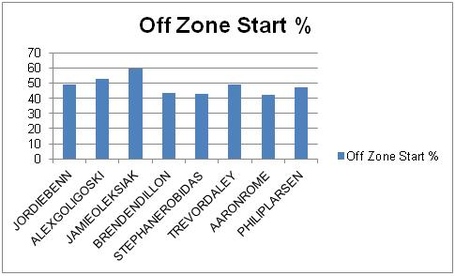 Giving Goligoski a higher ratio of offensive opportunities is logical - his best attributes are shown offensively. Why bury him defensively? Putting your players in the best position to succeed is a requirement of good coaching. 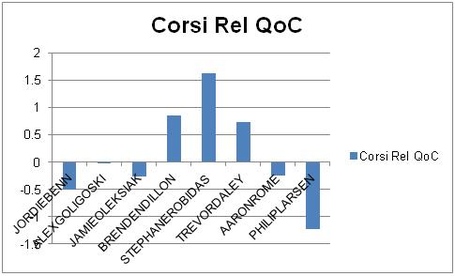 Quick refresher - Corsi Relative is essentially a measure of a player's puck possession abilities (relative to his teammates). And QoC measures this statistic from the perspective of the Quality of Competition (opponents on the ice). It isn't a perfect measure of competition quality, but it is probably the best readily-available metric we have to use.

Again, the numbers support what we have seen on the ice this season. Dillon, Daley, and particularly Robidas have seen the toughest minutes (by far), while the rest of the defense has been given "sheltered" minutes/roles. 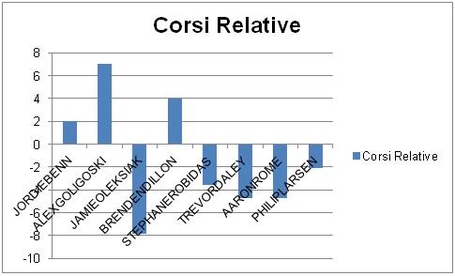 And finally, Corsi Relative. As mentioned above, this measures a player's ability to drive possession. Context is important for this statistic, as the link above alludes to:

For example, Robyn Regehr's Corsi REL last year was -11.4, which means ~11 shots more per 60 minutes of even strength ice time were directed at the Flames' net while he was on the ice then when he wasn't. Now, that may seem really terrible (in fact, it was in the bottom third of the league last year-lumped in with superstars like Deryk Engelland, Cody McCormick and Bryan Allen) but when you take into account a couple of other stats, a number that low is to be expected.

A player's Corsi Relative rating is very dependent on how tough the minutes he plays are (and this is were zone starts and Corsi Rel QoC come into play). Goligoski has a high Corsi rating, but he also sees relatively easy minutes. The same goes for Jordie Benn. This above chart is a great example as to why Dillon has been one of the best rookies in the NHL this season. He has seen tough minutes on a playoff-calibre club, and he is still driving possession in the right direction.

The advanced stats are great (especially when they confirm what you have seen), but do they corroborate the "eye test" from this season? I'd say so. Robidas has performed very well in a tough role. Daley has been his usually solid two-way self (with a few hiccups along the way). Dillon has had a few "rookie" games, but for the most part he has been a steady and dependable two-way defenseman (especially from February onward). The rest of the defensive group has been inconsistent, although Goligoski is playing much better now than he was a few months ago.

Dallas has a mobile defensive group (to say the least - there aren't many players in the NHL who can skate like Daley), and that mobility is only going to improve as Oleksiak and Joe Morrow start to earn spots as regulars on the back end.

The above stats (the "basic" stats, if you will) and the advanced stats really reinforce what we have seen from Dallas' defensive group in 2013.

This is a two-horse race between Dillon and Robidas. Dillon has moved back to the second pairing with Goligoski in recent weeks, but I wouldn't say that is because of how he was playing (I think the Stars split him and Robidas up to get a defensive/shutdown guy on each pairing in the top four). Dillon has surpassed even the wildest expectations, while Robidas continues to defy father time as a physical/undersized defenseman in a Conference dominated by big and bruising forwards.

Relative to expectation, Dillon has been the best/biggest surprise in Dallas, and he has had a few stretches where he has been their most notable and dominant defenseman from a physical standpoint (at 6-3 and 230 pounds, he's about half a foot taller and 50 pounds heavier than Robidas). And I think he deserves some serious Calder attention (defense is a much harder position for a rookie to master compared to forward).

However, in ranking the "best" Stars defenseman in 2013, I asked myself the question, "Which defenseman's absence from the lineup would be the most notable?"

And to me, the answer to that question is Stephane Robidas.