VIDEO: Dustin Brown's Late and High Hit on Antoine Roussel - Suspension or No?

Dustin Brown came through late and high on Antoine Roussel in the Dallas Stars overtime loss to the Los Angeles Kings. The hit wasn't penalized in the game, but will it lead to supplemental discipline?

Share All sharing options for: VIDEO: Dustin Brown's Late and High Hit on Antoine Roussel - Suspension or No?

It's no secret that I'm not the world's biggest fan of Dustin Brown. While having many admirable traits as a hockey player, I just can't get over the incessant call-seeking. And then there's than penchant for borderline hits.

Brown delivered another one of those hits late in the Dallas Stars 4-3 overtime loss to the Los Angeles Kings on Sunday. This time, he sideswiped Antoine Roussel with a head-high hit with 3:39 left in the third period. No penalty was given on the play.

So as your resident rules nerd, I will attempt to put my personal distaste for Brown aside and break down the hit as objectively as possible. Does it deserve a suspension? I would say yes, but I have only about a .500 record with the NHL's wheel of justice the season.

First off, a video from the Stars feed:

First of all, this hit is late, though not dramatically so. Roussel releases the puck about a quarter of a second after the clock hits 3:39 left. Brown is about two strides away from him at that point with his eyes locked on Roussel. He knows he is passing the puck at that point. And for the record, Roussel's head pops up to look at Brenden Dillon receiving the puck - exactly what he needs to do in order to not put the play offside.

Brown does not hit Roussel until a hair before the clock turns over to 3:38, so about .75 seconds after the puck was released. The standard for interference in the NHL is a half-second. Dillon has collected the puck and is breaking it into the zone when Brown delivers the hit. Roussel is clearly no longer in possession and is not eligible to be hit. Beyond that, Brown has time to pull out of the hit, but he doesn't. He actually follows through with the high contact, as evidenced by the follow-through.

So this is, at least in my eyes, interference resulting in an injury. That is potentially suspendable, though generally it takes more than just something late. Brown may have crossed that threshold here by the sideswiping, high nature of the hit.

So about our old friend Rule 48. Here it is again in all its glory:

A hit resulting in contact with an opponent's head where the head is targeted and the principal point of contact is not permitted. However, in determining whether such a hit should have been permitted, the circumstances of the hit, including whether the opponent put himself in a vulnerable position immediately prior to or simultaneously with the hit or the head contact on an otherwise legal body check was avoidable, can be considered.

So there are three things you need and two caveats that can get you off the hook. Lets look at them each individually.

First, was there contact with Roussel's head? I would argue absolutely. This will be the stickiest area for the NHL to look at because there's no good, unscreened front angle on the play. But here is the circumstantial evidence:

After the hit, Roussel's forward momentum does not change in the way it would if he took a shoulder to the chest. His feet, hips and shoulders continue forward while his head is jerked back hard and to the side. His body then follows for a few moments as his head snaps, and the then falls to the ice facing the opposite direction because of the spin.

A full body hit, or even one with significant chest impact, would have sent his momentum further backwards. He falls to the ice a good 10 feet from where the hit actually occurs because his momentum was going forward and was not stopped by the contact. That tells me the hit occurred away from any center of mass and far too high for it to have any impact on Roussel's momentum. In the following screenshot, you can see how Roussel has continued to move and virtually the same speed to the left of Brown as he was moving before the contact. Contact with his chest would have stopped him much more in his tracks. Brown has continued forward in a straight line from the point of the hit. 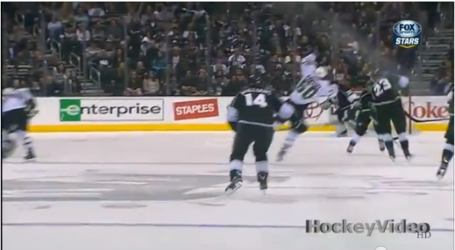 There have been suggestions that Brown got Roussel's chest and simply forced Roussel's stick into his own face. To those people I would ask - why did the momentum of Roussel's chest continue forward if there was any meaningful contact in that area? And why did Roussel's body lift up a few inches (see the above screenshot) if there was no upward momentum delivered to somewhere more substantial than just the hands? The stick definitely did travel through Roussel's face, but Brown also makes some sort of contact meaningful contact here as well, and it ain't with the chest or only the hands.

So for the moment, at least for the purposes of this article, let's assume there was significant head contact. Let's move on to the related qualifier - was the principal point of contact the head? Brown didn't hit much else, honestly. A hit with the principal point of contact being the chest would have sent Roussel flying backwards or at least stopped in his tracks, not sent him spinning, and it would have impacted Brown's own forward momentum which is essentially unchanged before and after the contact. This was a sideswipe-type of a hit.

The third qualifier - was the head targeted? This is a question of intent, and how Brown follows through high and fails to make contact with any other part of Roussel's body would lead me to believe the head was targeted, or at the very least Brown wanted to throw a head-high hit and just hope he got shoulder/chest as well.

For me, it comes down to the angles of the hit here and the way that Brown was utterly unfazed in his forward momentum. If you look at that NHL video of illegal checks to the head linked below, they are all sideswipes. There is almost no meaningful legal hit you can throw on a crossing pattern sideswipe. You can trip a guy, sure, if you stick your leg out, and you can elbow him in a variety of places. But it's almost impossible to sideswipe a guy and get any part of him at all without taking yourself out of the play while throwing a legal hit.

Now onto the caveats that get guys off the hook. Was there head contact on an otherwise legal bodycheck is the easy one - there was no other check other than the head-high one. The NHL is looking for full-body style hits that may lead into the head but also steamroll through something else significant. That's not what happened here. Additionally, Brown sideswipes him - he could have made no legal hit to the body at all given how his momentum took him across Roussel unless he substantially altered his path.

So did Roussel put himself in a vulnerable position just before the hit? Let's put aside for a moment that the hit is slightly late and there is no legal way to make contact (and therefore being in a "vulnerable position" should have no bearing). Roussel does slightly lower his head as he makes the pass, a natural reaction to throwing your weight into it. But he is back up into his original hockey stance by the time contact is made, and his head is not any farther proportionally in front of his body at either time. His head stays in the same position relative to his shoulders, and at the moment of impact, Brown had every ability to know where Roussel's head was and to not make the hit.

For the record, I don't think this is elbowing. I know that got brought up a few places, and while Brown does follow-through with a high chicken wing, that's a fairly common reaction from guys who are throwing their shoulder up into another guy. I am pretty sure Roussel got Brown's shouldercap, not his elbow.

The NHL has released a wonderful series of videos about what is and is not an illegal hit, and this one involves rule 48. I would argue that Brown's hit is most similar to the second suspendable one, delivered by Brendan Smith of the Detroit Red Wings. In both cases, the hits were sideswipes with very little body contact, shoulders to the head with a high follow through. The third and fourth suspensions are also similar, while all the legal ones all involve much more substantial full-body contact. The way Ben Smith falls in the second suspension video is almost identical to the way Roussel fell in this game.

So will Brown be suspended for this? I was wrong about the Martin Hanzal hit on Jamie Benn, but I think what got Hanzal off the hook in that case was the contact with the body. You could argue, though I certainly would disagree, that Hanzal was plowing through Benn's entire body and that while he got Benn's head first, the head contact itself was unavoidable. And for the purposes of comparison. Brown got a lot, lot less of Roussel than Hanzal got of Benn.

The question on this one will be, I think, how much head contact was there? There weren't any great angles on this one, but from the way Roussel's skates and, more importantly, chest continue forward while his head leads the way back, I think it's something you can infer. There's certainly no full-body contact, and while the stick does travel across the face, Brown hit something more substantial than just hands the way he followed through with the chicken wing and the way Roussel's head is thrown back so hard.

But Brown is an NHL star, the captain of the reigning Stanley Cup champions. The NHL has shown a troubling lack of willingness to suspend its name players, especially when it involves hits on players of lesser profile. To be fair, that does not end at Brown. But Brown has a reputation a mile long and city blocks wide but with no history of suspension.

I honestly wouldn't be surprised if Brown got off without a suspension, both because of the lack of a clear angle on video and because of the benefit of the doubt he gets as a high-profile player in the league. That's a pretty sad rationale, but that's also the state of the current system, which again, goes beyond Brown (see Taylor Hall's non-suspension for a lumberjack of a slash). The more things change, I guess...