2013 NHL Trade Deadline: What is the Identity of the Dallas Stars?

As the Trade Deadline fast approaches and with the Dallas Stars floundering, Jeff Angus takes a good, hard look at the makeup of the organization and ponders -- as we have time and again -- just what the identity of this franchise might be.

Share All sharing options for: 2013 NHL Trade Deadline: What is the Identity of the Dallas Stars?

These next 48 hours (and few months, for that matter) are very, very important for Joe Nieuwendyk and the Dallas Stars. Do the Stars do a full scale rebuild at the deadline and in the summer? Do they try and maximize the return on a few assets while retaining most of their core pieces? Do they stand pat and hope that Kari Lehtonen can carry them into the postseason?

Regardless of what you think the Stars should do, and who you think they should/could add (Jay Bouwmeester was the top target in my eyes, but that ship has sailed to St. Louis), the most important first step is to figure out the team’s identity. No team has ever won a Stanley Cup without an identity. The Stars have tried to play different styles over the past few years, to varying degrees of success.

The whole "pesky Stars" thing was fun for a while, but "pesky" isn’t an identity. And if it was, it isn’t one that a team would want. Pesky implies being an annoyance, but nothing too troublesome (you wouldn’t call the Boston Bruins "pesky," for example). And that is exactly what the Stars have been since 2008. A team with a bit of grit and some tenacity – enough to enrage opposing teams, but not to the point where they take the Stars seriously as a measuring stick.

I made this point in my deadline preview a few weeks ago:

The New York Rangers landed Rick Nash in the summer, but they lost a lot of depth and grit in the process. Nash has been very good for them, but their grit and depth have been lacking. And this has affected their playing style/identity (and in turn on ice performance).

Do the Stars want to be a team known for great goaltending, an enigmatic offense, and a suspect defense? I doubt it, but that is the book on them right now. The team has a decent prospect pool - not amazing, but far from the worst.

Relating back to the team I cover the most, the 2006-07 Canucks had the identity of a hard-working team with solid defense and stingy goaltending. Luongo was their most important and best player by far (much like Lehtonen is this year for Dallas). Alain Vigneault did the best with what he was given. Since that time, the Canucks have morphed into an offensive juggernaut with an aggressive defense and very good goaltending. But it didn’t happen ove night, and it took complete organizational buy-in from the top down.

The Stars haven’t really settled in to any sort of consistent game plan in 2013. Is that the fault of the players? Maybe a bit, but they follow instructions. Is it the fault of the coaching staff? Maybe, but again, coaches do the best with what they are given to work with. Dallas has a decent roster, but there are obvious holes up front and on the back end.

The Stars have tapped into the WHL a lot in recent years, and that shows through with how they play on many nights. They may not outshoot or outscore opposing teams, but they never back down from the physical stuff, and top to bottom there aren’t many players who shy away from playing a tough brand of hockey. But again, is that enough to forge an identity around? Probably not.

Look at all of the successful teams in recent years.

Detroit has always been a puck possession team that doesn’t worry about the physical stuff (that doesn’t mean they shy away from it, but they don’t need to engage in it as much as they usually have the puck more than their opposition). You don’t need to throw hits when you are carrying the puck, after all.

But they don’t get that far without Jonathan Quick. At the end of the day, great goalies make coaches look like geniuses, and teams like well-oiled machines (even when they aren’t).

It isn’t easy to simply add "big" players (or "small" players, if a team chooses to go that route) – it takes years and years to forge any sort of identity. Most of the hard work is done on draft day, while smart trades (Jeff Carter to LA) and signings (Zdeno Chara by Boston) can speed things up considerably.

But, as mentioned above, none of these big and deep teams win anything without great goaltending. Detroit didn’t always need great goaltending, and Chicago didn’t during their Cup win in 2010 – both teams relied on skill and puck possession to win. They didn’t need the size to retrieve pucks along the boards or behind the net, as they usually carried it into the zone. And because they had the puck so much more than the opposition, they tended to hold a distinct edge in both time on attack and shots on goal.

Which brings us back to Dallas.

Right now, the Stars aren’t skilled enough to play a puck possession game, and they aren’t big enough from top to bottom to play a Boston or LA brand of hockey. Is that a bad thing? Not necessarily – as I said above, it takes years to forge an identity. You can’t do it with a trade or two. Taking stock of the core pieces in Dallas, and it becomes a bit easier to pick the best direction for this team to head.

Dallas has had several defensive issues this season, outside of the Brenden Dillon-Stephane Robidas pairing. 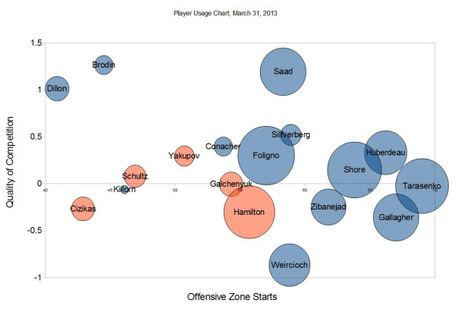 (You can check out these fantastic Player Usage Charts over at HockeyAbstract.com)

The above chart has every NHL rookie. What the two axes represent – zone starts, and quality of competition. Essentially, Dillon and Minnesota’s Jonas Brodin play the toughest minutes of NHL rookies (by far). And both of them are doing a pretty good job of it, too.

Dallas’ defensemen have had issues defending both off of the rush and in defensive zone play. Their defense can be faulted for many things (ability to contain big forwards, coverage around the net, and so on), but one thing you can’t criticize them for is a lack of mobility.

And Daley may be the very best - he is so fun to watch work the line on the man advantage:

Top to bottom, there aren’t many defensive groups around the league that can skate like Dallas’ defensemen can. How do the Stars go about accentuating that asset? By bringing in a minute-eating defensive stud who is a phenomenal skater (Bouwmeester would have fit this to a tee). The Stars hopefully took a look at him – he makes lots of money, but that is no problem for a team with ample cap space and a committed ownership group. Bouwmeester isn't the only good defenseman available, but none of the other ones fit the Stars as well (on paper, at least).

That being said, there are likely a number of other defensemen who are available without us (or the media) knowing about it.

Adding a defenseman of Bouwmeester's calibre would take so much pressure off of Robidas, Trevor Daley, and Alex Goligoski, allowing them (especially the latter two) to skate more and make more plays in transition and at the offensive end. Dallas has lucked out with Dillon’s rapid development this season – it would be scary to think where they would be without him.

So far, we have a team with a great goaltender, and a mobile but error-prone defensive group. How about the forwards?

Up front, the Stars are a bit of a mixed bag right now. They have several big wingers and centers who love to lug the puck around the ice – Jamie Benn, Jaromir Jagr, Loui Eriksson, and Erik Cole. And they have some smaller forwards who use speed and craftiness to make plays – Derek Roy and Ray Whitney.

In the bottom six, Cody Eakin has a bright future and will be a huge part of the team for the foreseeable future. After him, there aren’t any "core" pieces. There are some solid players with projectable upsides (Ryan Garbutt, Antoine Roussel, Tomas Vincour, and so on). And there are some intriguing young players in the organization, too (this list starts with Reilly Smith, who has been really impressive this year). Matt Fraser will be a full-time NHLer next year, too. Radek Faksa is a ways away – he’s had a tough year in the OHL. I really like Colton Sceviour, but again, his upside at the NHL level is limited.

One common denominator at defense and up front on the Dallas roster is speed. Outside of a few notable exceptions, most of the regulars on the roster can absolutely fly. And that speed allows them to push opposing defensemen back on the rush. The team has tried to play the dump-and-chase game, but it hasn’t been a successful strategy (for that matter, most teams are more successful with carrying the puck into the offensive zone).

Most people don't recognize just how big the difference is, and the data suggests that teams should be trying harder than they are to carry the puck in. If coaches are telling their third line to dump the puck, they are probably giving away scoring chances. If coaches are telling the players to dump the puck in borderline situations where they think carrying it might lead to a turnover, they are probably giving away scoring chances. Even regrouping and trying again might be better than dumping the puck in, especially when the team has their top line on the ice.

With every move the Stars make in the near future, they need to remember what their identity is. And if they can’t find one right now, they need to figure out what they want their identity to be. With their current core pieces in the organization, the focus needs to be on complementing speed and skill. It won’t be easy to build a puck possession team (Pavel Datsyuks, Patrick Kanes, and Nicklas Lidstroms don’t grow on trees unfortunately), but the Stars are heading in the right direction. And thankfully they have an all-world goaltender to help mask the problems in the meantime.

What style of hockey would you like to see the Stars play? What style best fits with their current core pieces?

· Antoine Roussel - More than a Pest?

· What Should Joe Nieuwendyk Do?

· What do the Stars have in Joe Morrow?