Share All sharing options for: The Wizard of Dallas: Ray Whitney's Emergence

Ray Whitney's NHL career continues to fly under the radar relative to many of his contemporaries. Whitney took some time to establish himself as a legitimate top-six NHL forward, which came during a 32-goal campaign with the Florida Panthers back in 1997-98.

He has been great all season for the Stars, but he has really stepped out of the shadows after the trades of Brenden Morrow, Jaromir Jagr, and Derek Roy. The Stars have found their identity - a physical team from top-to-bottom that plays a direct game (without dumping the puck in all of the time).

Whitney is a great example of the term "sport-specific skill." Nowadays athletes spend all summer (and all season) preparing their bodies with grueling workout routines and incredibly strict diets. Whitney obviously takes care of his body, as he remains an elite player into his 40's, but he doesn't dominate with his physical tools. You could be 6-6 and 250 pounds of pure muscle, and he's going to find a way to get around you (or saucer pass the puck over you, for that matter).

Whitney is a signifcantly better player than Kyle Wellwood, but I enjoyed Wellwood during his tenure with the Canucks for similar reasons. The little passes in the defensive zone, the shifty moves with the puck, the sense of knowing where everybody was on the ice at all times - it is a joy to watch these guys thrive against bigger and stronger (and in Whitney's case, significantly younger) competition. Another thing with high hockey IQ guys - their passes are always on the tape. Lesser players sometimes fire the puck off the boards, or ahead of/behind a guy by a stride or two. Not Whitney. Every pass gives the receiver of it the best possible opportunity to make a play.

I've particularly enjoyed watching the hockey that the Stars have been playing over the past few weeks, and Whitney's emergence as the team leader is a big reason for that. The rest of the forwards feed off of him (literally, he gets his linemates a ridiculous amount of open looks and prime scoring opportunities), and having a guy like that in the dressing room has to be great for the likes of Jamie Benn, Alex Chiasson, and Matt Fraser. Whitney wasn't a high profile prospect, and he emerged as a good NHL player in the middle of the dead puck era (when teams were preoccupied chasing the next Eric Lindros).

With all that said, let's look at the Wizard in action. 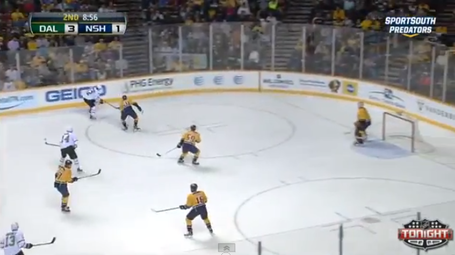 This is the Chiasson goal from the other night (which one, I know). Chiasson carries the puck into the zone before making a hard reverse around the glass for Whitney, who slides in along the near boards to receive the puck on his forehand. 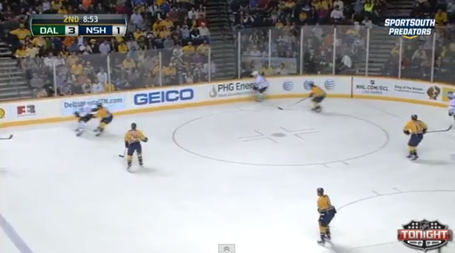 Here's the reverse - Benn leaves the puck (it would have been a difficult puck for him to corral, as it was about shoulder height). So far, so good in terms of Nashville's defensive positioning. 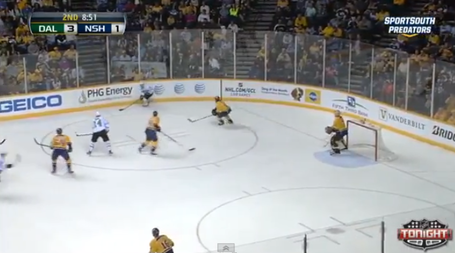 Whitney now has the puck, and has some space to make a play on it. The Predators are close to Benn, and for good reason - his one-timer is heavy and accurate. Chiasson does what all coaches tell all talented young players - he goes to the net on a direct line with his stick on the ice.

What comes next is what makes hockey so great. 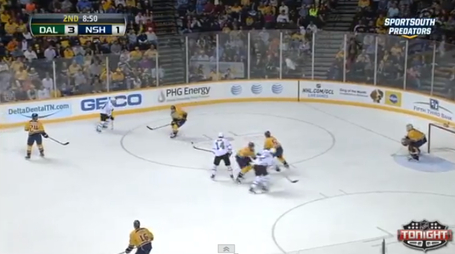 Whitney saucer passes the puck over/beside/between/around three Nashville players. It lands right on Chiasson's stick, and he makes a nice play to tuck it past the goalie.

There are a handful of players in the league (Henrik Sedin, Pavel Datsyuk, Patrick Kane, Sidney Crosby...) that could make a pass like this. 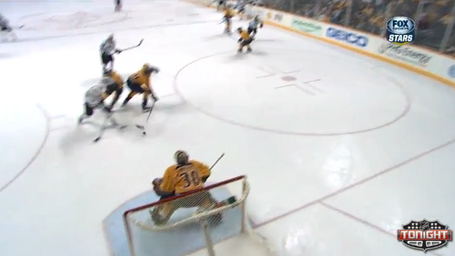 The puck is, oh, about two inches away from the defender's stick. 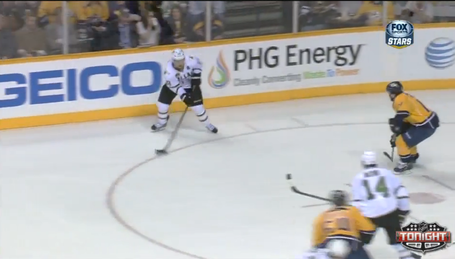 The Wizard at work.

And some more magic from Whitney (with Chiasson playing the role of finisher). 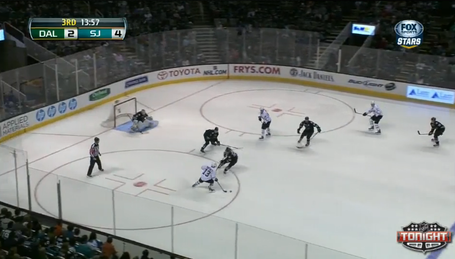 Whitney again has the puck on his forehand is looking to make a play. And again, Benn is the decoy (but the Sharks don't know that). Chiasson, stick on the ice, goes to the net. 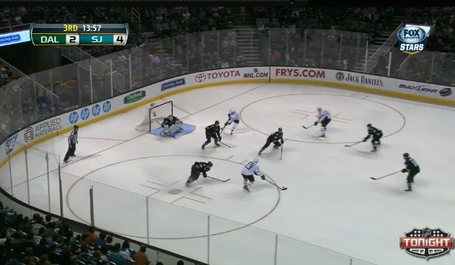 San Jose is in trouble now. Most NHLers would shoot in this situation, but most NHLers don't have Whitney's hands or vision. 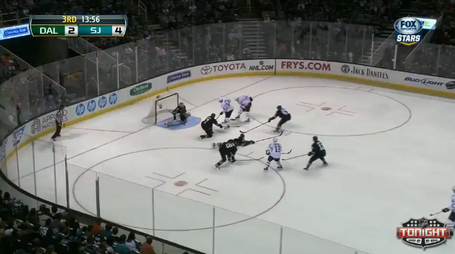 Saucer pass right on Chiasson's tape, and into the back of the net. 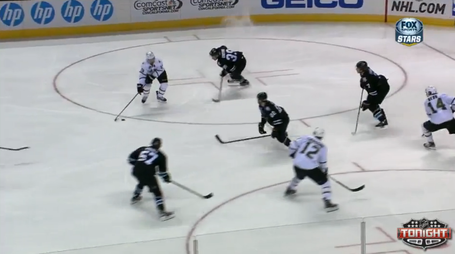 Shark-infested ice is apparently no problem for Whitney. Enjoy him, Stars fans, as players (and people) like Ray Whitney don't come around very often.