Alex Chiasson is getting all of the praise and attention after just four games, while Reilly Smith is seen as having an underwhelming NHL rookie season. What's the true story and what has led to the different perceptions of each player? Let's take a look...

This is a job probably best left to Josh, but I've seen plenty of discussion on the subject and felt it was a prudent time to weigh in.

Alex Chiasson has taken the NHL and the Dallas Stars by storm in just four games, notching three goals and four points while his team is suddenly surging up the standings. Chiasson's impressive debut has led many to wonder why he wasn't in the NHL sooner and has been directly compared to another highly-touted prospect that also played a significant role with the Stars this season -- and one that also came out of college after last season.

Reilly Smith enjoyed one heck of a career in the NCAA and was one of the nation's best goal scorers last year and it could be said that perhaps he came out of college a bit overhyped, perhaps. Nonetheless, the speedy winger made a forgettable NHL debut at the end of last season and then earned a somewhat regular spot on the NHL team this season after spending the lockout in the AHL.

Along with Cody Eakin, Smith formed one heck of a dangerous top line in Austin and it was expected that same success could carry over to the NHL -- with limited expectations. In 31 games, however, Smith has just three goals and four assists and constantly bounced between a third and fourth line role and a shaky role in the top six.

So what has led to the short term, explosive success by Alex Chiasson and the scoring struggles of Reilly Smith? First, let's take a look at their raw stats between the AHL and the NHL:

The first thing that stands out is that Smith has been the better offensive player in the AHL this season, as well as the most consistent. When he was assigned to Texas for one game in March he was a dominant force on the ice. In his last ten AHL games, dating back to January and before the NHL lockout, Smith has three goals and nine assists and is currently riding an eight-game point streak. Since December, he's been a point per game player in the AHL.

Chiasson, meanwhile, enjoyed a similar ride. After a slow start, Chiasson enjoyed a much better second half of the season and but was not exactly the steady, consistent point producer that Smith has been at that level.

Success For Dallas Stars' Alex Chiasson Comes As No Surprise 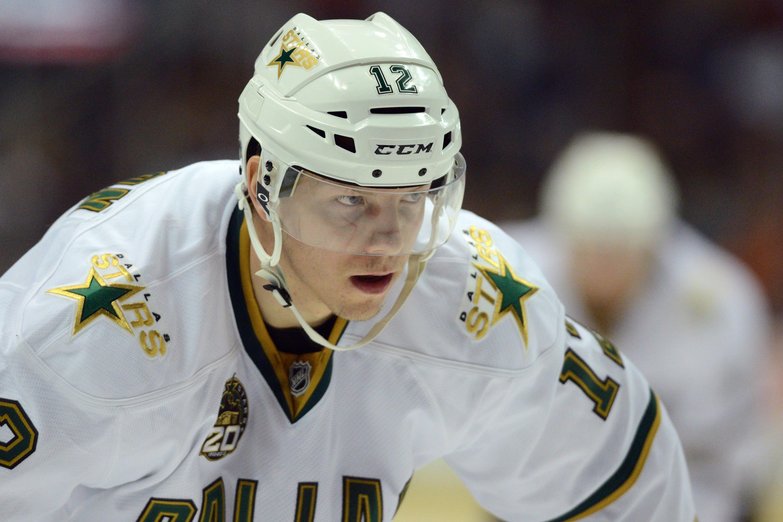 SThe young Dallas Stars forward has already made a significant impact on the ice in just three games. We should have not been surprised, however.

Jump to the NHL, however, and things change. Smith struggled to get his first NHL goal and while he showed the ability to be a deft playmaker from the boards, never seemed to fully take advantage of the chances afforded him. A few breakaways scattered here and there, some shots off the post and getting jerked around a bit from line to line robbed Smith of what could have been a much more prolific NHL rookie season.

In a very, very limited and small sample size, Chiasson is grossly outproducing Smith. Playing on the top line with Jamie Benn and Ray Whitney, Chiasson has been the recipient of some great plays by his linemates but also made a big impact on his own right. He's certainly been noticeable and that has led to heaps of praise falling upon him (including us) while he's yet to play his fifth game in the NHL.

Let's dig just a bit deeper, however, and try and see what else is going on. Remember, these numbers are based off just four games by Chiasson and small sample sizes beget wonky statistical numbers, so take this next section with a big grain of salt.

Obviously, Chiasson's offensive output is not sustainable. I don't think any of us expect him to be a point-per-game player at the NHL level. But there is some telling stuff here.

For one, Smith was getting around 5-8 mins per game for most of March when the Stars received their full compliment of forwards after injuries. Playing on the third and fourth lines will afford Smith less offensive opportunity and TOI than Chiasson, who is getting significantly more ice time on the top line with Benn and Whitney.

What you also see here is why analysts absolutely love Smith. He's the best player on the team with more than 20 games played in Corsi On and is also second only to Whitney relative to the rest of the team. By comparison, Chiasson's Corsi numbers aren't that grand, and you can also see his PDO has been driven high -- likely because of an unsustainable 37.5 shot percentage.

Chiasson starting nearly 72 percent of his shifts in the offensive zone doesn't hurt, either.

So what's led to this vast difference in numbers, results and perception? The answer is actually really simple and comes in two parts:

Chiasson is playing with a revitalized Jamie Benn and Ray Whitney, who are using the new wide open style of the Stars to great effect. Chiasson's bruising and physical style of play also compliments that line tremendously, as does his penchant for getting to the net and using his great size to his advantage against NHL defensemen.

Conversely, Smith had bounced around from line to line but spent most of his time on the third or fourth line, playing with Cody Eakin and Brenden Morrow and others of the same ilk. Smith received some time on the top or second line yet seemed to quickly bounce back down as the game would wear on. Smith showed some good ability to create space and play somewhat decently in his own zone, but the actual production just seemed to be right out of reach.

One reason Chiasson has been so noticeable is because he's instantly stepped in to be one of the more physical forwards on the team, and he should be. At 6-4, 205 or so (he's said he's closer to 200 right now), Chiasson has superior NHL size already and that was his calling card in the NCAA -- a bruising and physical power forward that can get to the next and create havoc.

Doing so on the top line helps, as well.

For Smith, who is a smaller finesse player who relies more on skill than brute strength, the transition to the NHL has been tougher. He's excelled at the AHL level, yet that league is no where near as big or as physical as the NHL and we've seen time and again that it takes skill players a bit longer to translate their skills to the higher level of play.

Matt Fraser is near dominant in the AHL but has been completely invisible in the NHL. This isn't a knock on him, but a sign that it takes time for these types of players to adjust. There's also something to be said that Smith could use some time with Gary Roberts, even though he's already added size to his frame over the years.

It's easy to say that Smith might have been a bit disappointing, or that he's just been okay during his time in the NHL but we have to remember all of the factors that go into a player's output at this level. Smith's advanced numbers compare almost directly to those of Tom Wandell over the past few years and there's a worry that's what Smith will be -- a player unable to produce in the NHL.

Yet Smith is a much, much better player than Wandell offensive and a much more natural goal-scorer. It's only a matter of time before he starts to put it all together for the Stars and it's hopeful that a playoff run in Austin will help him along with that journey. There's also something to be said that perhaps Smith would have greatly benefited from this new, faster and more direct style of play the Stars are currently enjoying.

In the meantime, Chiasson has been impressive and everything we thought he could be. This isn't a competition between the two players, but it's interesting to see just how different their NHL seasons have been thus far and the perception of both among Dallas fans and media.

If nothing else, they've both been good and can only get better -- and that's all we can ask for.