The Dallas Stars once again fell flat with a poor effort against the Los Angeles Kings. What has led to these inconsistent performances and who is to blame? The answer is not that simple...

As we sit here on April 1, with just 14 games remaining in this truncated 2013 season and the Dallas Stars sitting two points back of a playoff spot, we are once again faced with existential questions regarding this maddening hockey team we so dearly follow.

For many this was a season of transition alone, where struggles were to be expected as a young and inexperienced defensive group was thrown to the wolves behind a forward group that only recently found any sense of continuity -- at least until Brenden Morrow was traded. Sitting just outside of the playoff picture could be seen as a victory by most, a Dallas Stars team overcoming a tough schedule and an uncertain roster to at least show the ability to battle it out for a playoff spot while squarely focused on the future.

After all, just making the postseason would have been seen a massively welcome surprise.

Unfortunately, it's just not as simple as such an approach suggests. Because while the end results in the standings might have been expected, the path the Dallas Stars have followed to get here has certainly been incredibly frustrating and alarming -- and it all comes down to one simple thing.

...it's tough not to look at how these games have played themselves out and not feel a stinging sense of pessimism that perhaps the immediate future isn't quite as bright as we expected it to be.

This has been the problem with the Dallas Stars for more than a few seasons now and it's a big reason why players like Adam Burish, Sheldon Souray, Mike Ribeiro, Steve Ott and even Brenden Morrow were moved or allowed to leave in the past year or so. This franchise made a very concerted effort to move to new, younger core of leadership for the Stars and then placed around that core some very select veterans to help aid the transition.

Enter Jaromir Jagr and Ray Whitney, and we could even include Erik Cole in that conversation.

It's one thing to work through a season like this one, with the same results, and state that things are looking better because -- at the very least -- this was a team that played up to its full potential, that gave it their absolute best game in and game out and despite the shortcomings of the season as a whole, we can be proud of what happened on the ice no matter what the eventual outcome.

"It was two teams from two different leagues tonight," said coach Glen Gulutzan on Sunday after a demoralizing 3-2 loss to the Los Angeles Kings. "And they were back-to-back. Thank the lord they weren't fresh."

Gulutzan was perhaps the most candid we've seen from him after a loss and for the first time since he's been in Dallas he truly called out the team to the media. He's come close (most notably after a win over the Wild at home last season) but here he really lays his frustrations on the line.

"Embarrassed," said Gulutzan, when asked about the game. "At times, who are we supposed to put out? Did anybody stick out to you? We need to amp up our level. We are fighting for our lives, here. If we think with performances like that, we are going to stroll in, we are mistaken. We've got a three-game series against Anaheim after an embarrassing outing in front of our home fans like that, we better come out hard tomorrow. We will come out hard tomorrow if we've got any balls."

There were certain players on Sunday night who could be highlighted as sticking out with strong individual efforts yet once again, as a team, the Dallas Stars fell completely flat in a game they absolutely had to win to even hope to keep pace in the Western Conference playoff race. This is a trend that has been carrying on for too long now, one that started with Marc Crawford and has carried over to Glen Gulutzan's tenure and when you see exactly what this team can be capable of it makes the shortcomings all the more painful to live through.

The problem is that we've heard all of this before. Too many times over the past few seasons the Dallas Stars have come out embarrassingly flat on home ice in a game against an opponent they desperately needed a win against, only to talk that night or the next day about the team to "come out hard" and with more "energy" the next game, or else.

Or else, what? That's really the question.

This is also why Gulutzan's comments ring absolutely hollow, although I can appreciate the Stars coach finally feeling the time is now to truly speak up. Unfortunately, calling out the team publicly is something that should have happened a long time ago and doesn't feel to be backed up by any real threat from the coaching staff.

The going theory was that the core group of players that have struggled to make the postseason needed to be changed, hence the departure of so many talented players that ultimately came up short of reaching the ultimate goal by any hockey team. The Stars have now embraced a new direction for the franchise, a transition to a younger core with nearly the entire roster undergoing turnover when compared from 2011 to now.

Yet the results are not just the same, but even more inconsistent.

"What's most disappointing is the way we came out," said Stephane Robidas after the loss to the Kings. "It looked like we were the team that played back-to-back and had to travel. There's no excuse for that. They come out strong. It's our building. It's a game that is there for us. They were supposed to be the tired team and it was the other way around. It's disappointing. It's the consistency that has been lacking - consistency game to game and consistency within games."

Robidas is addressing the core problem that is plaguing this team but what are the solutions? Chances are the Dallas Stars come out like gangbusters against the Anaheim Ducks but such an effort goes nowhere if the next game is yet another dud.

So, we turn back to the coaching. There's no doubting at this point that Gulutzan just wasn't ready for the jump to the NHL when he was hired, although it seems the Stars were certainly limited in their options after Marc Crawford was fired in the summer of 2011.

While Gulutzan certainly seems to have improved on his game strategies and has embraced an every-changing philosophy on player and line deployment, the nature of actually preparing a team from game to game and from week to week has completely avoided him. A big part of that has to do with a lack of successful and cohesive system and structure, but a big part of that can come down to the lack of leadership in the locker room -- and that all starts with the coach.

If the Dallas Stars wants to be the team that turns over to a youth-infused roster, whose success rests on the shoulders of a younger core of Jamie Benn, Loui Eriksson and Brenden Dillon, then a system of leadership and accountability needs to be built around them. Some people are just naturally good leaders; many others need to be shown the right path on how to properly lead a hockey team.

That burden falls on the coaching staff, even a staff that apparently prefers to leave the accountability to be an issue between the players themselves. A so-called "player's coach" still has the job of putting the right leadership in place and properly fostering that leadership moving forward, without which the hockey team would resemble a rudderless mess with seemingly no direction from game to game.

Interestingly, that's where this team finds itself.

Stars Listening to Offers For Jagr? Not So Fast... 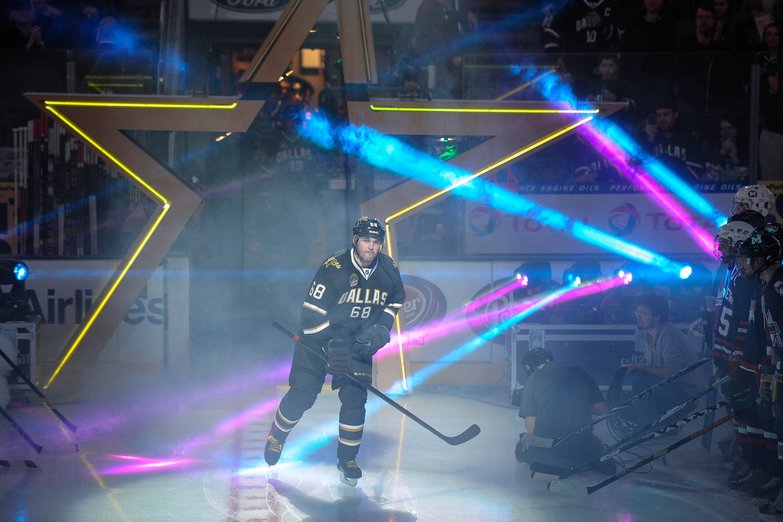 More speculation on the NHL trade front, this time featuring Jaromir Jagr and the Philadelphia Flyers.

Joe Nieuwendyk went out and acquired some notable players with extensive leadership experience to help aid in that transition, but don't expect them to do all the work. This isn't about building a team around Ray Whitney's or Jaromir Jagr's guidance alone; they're here to guide the Stars to a new, different future under those young players the Stars have turned to.

"I'm not a guy who's going to sit there and rah-rah you to death. I'm not into that. This isn't my team to lead," Whitney said in an interview with NHL.com. "It's a young team. It's their responsibility to take some of that challenge on. So you can't be sitting there and looking for a 40-year-old to guide your team to the next level. You got rid of an older guy (Morrow) who led your team for a long time in order to make room for younger people, so it's their responsibility to take that seriously and take it passionately. If you don't and if they don't, then you're going to have problems with your hockey club."

So, is this purely on those younger players like Jamie Benn and Loui Eriksson? Have they simply just not taken on that role as has been needed, or is there a much deeper issue at play here?

There's a very real chance that Glen Gulutzan and his staff likely won't stay with the Dallas Stars after this season, barring a last-second surge into the postseason and even then there are no guarantees. This has been an underwhelming hockey club for too many years, even with the roster changeover of the past few years, and the lack of consistency from just one game to the next has once again placed the Stars on the precipice of missing the playoffs.

For the Dallas Stars, this season wasn't solely about the playoffs -- it was about growth, it was about improvement and development and it was about transition. While there have been some very good signs with some young players, it's tough not to look at how these games have played themselves out and not feel a stinging sense of pessimism that perhaps the immediate future isn't quite as bright as we expected it to be.

Perhaps that is what is most concerning of all.