The Dallas Stars are working on an extension for forward Jaromir Jagr, according to a CBC report and sources with the team. It is not known if a formal offer has been made, however.

With the trade on Sunday that sent long-time captain Brenden Morrow to the Pittsburgh Penguins, many minds instantly turned to the next move expected by the Dallas Stars and general manager Joe Nieuwendyk. The Stars have three other notable pending free agents, including Derek Roy and Eric Nystrom, with the consensus being that Roy is almost certainly on his way out of Dallas by the time the evening of April 3 rolls around.

What about Jaromir Jagr?

The 41-year old veteran and NHL legend has been nothing short of amazing in his time with Dallas, leading the Stars in scoring while also providing valuable leadership and mentoring the young players on a team that is clearly in a state of transition. He has become an instant fan-favorite and early all Stars fans will want Jagr to stay in Dallas for the rest of this season and perhaps into next, continuing to produce both on and off the ice for a Stars franchise that could desperately use his continued services -- even this late in his career.

Sources informed Defending Big D on Monday that the Dallas Stars are indeed working on a contract extension for Jaromir Jagr, believed to be for one year, although it is not known how far along those negotiations have gone or if a formal contract extension has even been offered. There's also no indication of what interest Jagr has in signing an extension before this summer.

The CBC's Elliotte Friedman, in his weekly "30 Thoughts" column, also stated that the Stars are looking to extend the legendary forward:

The Morrow trade doesn't necessarily mean a Dallas sell off. Stars GM Joe Nieuwendyk was otherwise tight-lipped about it, but he did say they are trying to re-sign Jaromir Jagr. The goal is to keep, not trade him.

When reached for comment regarding possible negotiations with Jagr, a Stars official stated, "The Dallas Stars have a policy to refrain from commenting on any on-going contract negotiations, whether they may or may not be taking place."

It's important to note that there are no timetables associated with this report and while the Stars may be "working on an extension" it doesn't mean anything is close to done, just that discussions are ongoing.

We've heard that the Stars are not going to be actively looking to trade Jagr and that the team would have to be "blown away" by an offer to move him, even if an extension is not reached before the April 3 trade deadline. It's clear, though, that the Stars would like to get an extension done sooner than later, despite earlier indications that both the team and Jagr would want to wait until this summer to discuss anything regarding next season. 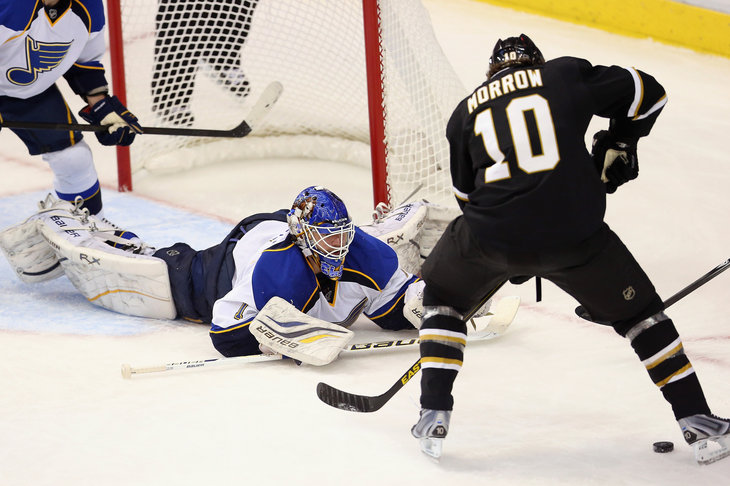 The Dallas Stars dealt captain Brenden Morrow to the Pittsburgh Penguins. In the process they generated a good deal of value for the franchise and created opportunities for some of their young players to establish themselves.

There has been a lot of discussion about what path the Stars should take with Jagr moving forward, with many around the league speculating on which teams might be the most interested in his services if the Stars did trade him. Conventional wisdom states that if the Stars do indeed trade Derek Roy then keeping Jagr for the rest of this season is not exactly maximizing his value, as making the postseason without Roy is going to be infinitely more difficult -- depending on any other possible moves.

Yet there's no doubt that Jagr could have some longer-term value for this franchise, especially if he returns next season. His presence has been a marketing boon for the Dallas Stars and has put the franchise directly in the national conversation, for some actual good reasons this time around, and it's clear that in the right role Jagr can still be incredibly valuable to the hockey team on the ice.

Jagr has shown a propensity to want to wait until after the season to make a decision about his future, so it's unknown exactly how he might approach a offer for a contract extension with 17 games remaining and no guarantees of a postseason appearance.

No matter what, indications suggest the Stars are certainly serious about keeping Jagr on the roster for just one more season and certainly are interested in maintaining as competitive a team as possible while the franchise continues through this time of transition.