VIDEO: Martin Hanzal Hits Jamie Benn in the Head; Suspendable or Not?

The Phoenix Coyotes forward caught Benn in the side of the head with a slightly-late hit late in the Dallas Stars loss. Should this be a suspension for illegal check to the head?

Share All sharing options for: VIDEO: Martin Hanzal Hits Jamie Benn in the Head; Suspendable or Not?

If Saturday's 2-1 loss to the Phoenix Coyotes wasn't frustrating enough for the Dallas Stars and their fans, things turned from bad to worse in the final two minutes as Jamie Benn took a high hit from Martin Hanzal that left him in a heap on the ice.

Benn had just shot the puck with 1:33 left in the game when Hanzal threw himself into a check, catching a large portion of the side of Benn's head.

Is the hit suspendable? It wasn't called by either Brad Meier or Francois L'Ecuyer, but they didn't call anything out of the ensuing scrum either, and there were plenty of obvious fouls in there as well.

To start with, here's video of the hit itself.

And here is the illegal check to the head rule in all its glory:

A hit resulting in contact with an opponent's head where the head is targeted and the principal point of contact is not permitted. However, in determining whether such a hit should have been permitted, the circumstances of the hit, including whether the opponent put himself in a vulnerable position immediately prior to or simultaneously with the hit or the head contact on an otherwise legal body check was avoidable, can be considered.

Notice, there is no longer anything about blindside, lateral or from behind. The only things that matters are as follows:

A quick note before we go on - "principal point of contact" is far, far more important to this rule than "targeted." It's in the rule because of the unavoidable contact issue, covered by the final caveat. I'd personally change it to something along the lines of "where contact with the head is avoidable and the head is the principal point of contact..." It fits the way they apply the rule much better.

So lets apply the criteria to the Hanzal hit on Benn.

Whether or not the head was targeted, it definitely seems to be the principal point of contact. Here are three screenshots from the Stars feed showing how Benn's head is snapped hard to his right before the impact gets to his shoulders or chest: 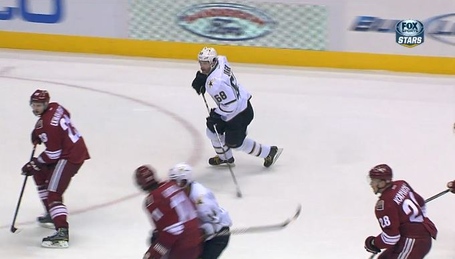 Here's your moment of impact. Hanzal has closed on Benn and cut slightly in front of him. His shoulder does not hit Benn's shoulder (which is nicely visible because of the yellow/green Stars emblem), and their hips are also not aligned. This does not start as shoulder-on-shoulder or hip-on-hip. 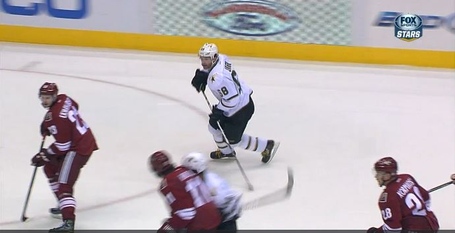 Hanzal continues to throw his body back against Benn's (if you watch the whole sequence of the play, Hanzal comes around and almost throws his weight back against the grain into Benn). Benn's shoulder is still visible, you can see Hanzal's shoulder clearly forcing Benn's head to the right and Benn's body has not yet started to move backwards as it would if significant momentum had been put into it at the initiation of the hit. 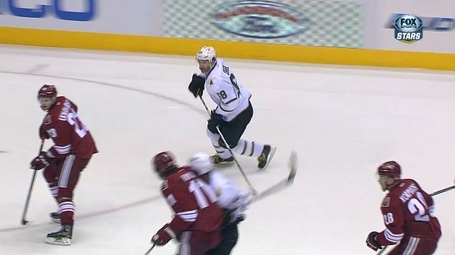 Benn's head is completely snapped to the right, and his body is only now starting to move backwards.

Now to the first of two caveats - did Benn put himself in a vulnerable position simultaneous to or immediately prior to the contact.

Benn is headed into the high slot the whole play. The position of his head does not change relative to his body, and as a left shot, he stays slightly facing to the right most of the play. Hanzal comes from behind and to his left, giving Benn minimal if any opportunity to see him coming.

It's quasi-blindside. Even though that doesn't matter anymore in the letter of the law, it still serves to emphasize that Benn's in a defenseless position here. His head is up for the majority of the play, only dropping at the moment he releases his shot as most players do. He even glances to his left at one point in the immediate lead up to the hit, but because Hanzal is behind him at the moment and Benn's body is angled to the right, he cannot see him coming.

Onto the other caveat - was the head contact avoidable on an otherwise legal hit. My first argument would be this is not an otherwise legal hit - this is interference, being a half-second or more after Benn has released the puck. You are allowed to hit the puck carrier, but you must make an effort to pull up and avoid the full check once you know the puck is gone. That's why the rule of thumb is a half-second - it's the amount of time the NHL believes its players can start to pull up on a hit in. Benn starts his shot just after the clock ticks to 1:33 and receives the hit just before it ticks to 1:34. Given a player who is shooting is giving up possession of the puck, Hanzal is supposed to start to pull up at that time. He never pulls up and executes a full check, as evidenced by his feet leaving the ice as he exploded up like players do when they check.

I would also argue that the head contact is avoidable. Hanzal could have flipped him over his back if he led with his hip. There is the opportunity to make a hit here that is not head-high. There is a height difference in the two players, with Hanzal listed at 6-foot-6 and Benn at 6-2. But there are other hits to be made on this play that don't bring the head into the equation at all, and it's Hanzal's responsibility to avoid the head contact because that is possible.

Finally, Hanzal is a repeat offender. He was suspended one game last May for boarding Dustin Brown and therefore, in the eyes of the league at least, deserves minimal benefit of the doubt.

Now obviously, I'm far from an objective source on this hit, though I tried to take as much of my personal bias out of the equation as possible. You can form your own judgment based on the video and screenshots above.

This, at its heart, is a Scott Stevens hit (with a side of Derian Hatcher, though he preferred to cream guys against the boards and not in open ice in my recollection). A slightly late, more-than-slightly high hit to the head of a player in a vulnerable position. At one point, these were celebrated.

But you know what? Scott Stevens hits aren't allowed in the NHL today. For better or for worse, and my view is for the better, they've been outlawed because they cause concussions at a frightening rate. Yes, it's dramatic to see a guy get blown up. Yes, big hits are part of the NHL's present, past and future. But the league has properly decided that a player's present and future brain health isn't worth the highlight reel moment of the Scott Stevens hit.

And that, to me, is why this is a suspendable hit. You can make that call for yourself, and obviously the league will weigh in at some point with its action or inaction.

The Coyotes don't play their next game until Tuesday, and the Stars had not determined Benn's status for the short or long term (other than the fact that he immediately left the ice) after the game. An injury to Benn would obviously play into any supplementary discipline, for better or for worse.