The Dallas Stars are getting significant contributions from deep within the developmental system for the organization.

This moment has been a long time coming and now that it's here, it feels so, so good.

Much of the focus leading into this system and beyond has been on the patience needed for the slower-than-ideal building process to start paying off. For a Dallas Stars team missing the postseason for four straight seasons, and once again looking to be in a hard battle for the playoffs this year, it's been a tough task to try and look ahead and see the light at the end of the tunnel while the present was mired in frustrating mediocrity.

This season has taken a bit of an unexpected turn, however.

The Dallas Stars, when not playing the Calgary Flames, have finally started to gel as a hockey team. Injuries and contract disputes kept the team and coaches from finding any real consistency but recent weeks has seen a continuity start to build, with coach Glen Gulutzan apparently finding the right balance in line combinations that has helped provide some actual stability up and down the lineup.

This season was always going to be a crap shoot, however, and while we expected a number of young players to get extended time on the ice this season I don't think we anticipated the number of first and second year players that would feature in such a prominent role. The injury concerns of the first few weeks of the season forced the Stars to play some young players in significant minutes, perhaps a bit earlier than actually planned, while it's tough to say those early-season struggles were a blessing it's clear that those first stumbles provided some valuable exposure and experience.

Most encouraging of all, however, is the fact that so many of the new faces on the team came directly from the Texas Stars of the AHL.

The Stars are where they are right now because of a myriad of reasons, including bad trades, bad free agent signings and financial issues -- but this is also a franchise that has had to spend the past three drafts repairing a farm system that appeared to be completely pushed to the side by prior management.

The Dallas Stars have never attempted to build a team in this manner before and it's a strategy that is entirely foreign to fans in North Texas. The Stars won the Stanley Cup in 1999 with one of the more veteran teams in the NHL, a conglomerate of gritty, salty players that quickly formed one of the more impressive hockey teams of the 1990s and early 2000s. That strategy, of shrewd trades combined with free agent acquisitions of proven players, is one the team attempted to follow again and again until the financial rug was pulled out after Tom Hicks' sports empire crumbled.

As we've chronicled, the Stars inability to draft and the focus on using draft picks as trade assets set the franchise up for a sharp downfall when the team was no longer able to spend freely to the salary cap. As we've seen for nearly every season since the last lockout, the salary cap era has also led to quick change in how teams focus on building winning teams; drafting and developing talent becomes the focus, rather than simply opening the checkbook and buying a team.

Under Joe Nieuwendyk the Dallas Stars have refocused on the draft and have put a premium on retaining draft picks and assets. While there have certainly been misses (Scott Glennie) the Stars have built one of the more respected farm systems in the NHL, one that is deeper than most even if a true "blue chip prospect" has yet to be found. The Stars have also shown an ability to find talent that had previously been overlooked, turning to a number of players that had gone undrafted that now fill prominent roles in the organization.

When we talk about building a successful organization, one that focuses not only on the present but the future as well, this is exactly what we should be expecting to see.

This is how it's supposed to work.

Cody Eakin, Reilly Smith, Brenden Dillon, Jamie Oleksiak, Jordie Benn, Ryan Garbutt, Tomas Vincour, Antoine Roussel and Philip Larsen have all come directly through the Texas Stars pipeline to play a significant role for the Dallas Stars this season. A mixture of draft picks and undrafted free agent finds, the Stars are now seeing the nucleus forming for the future of the team out of a system that had -- until just a few years back -- been completely barren and incapable of supporting the NHL roster.

That the Stars are experiencing such success with these players, most of whom played the first half of the season under Willie Desjardins in Austin, should be no surprise. It's amazing what can happen with continuity being built from within an organization.

In the past two games, the Stars have scored seven goals -- all coming off the sticks of one of the players listed above. Reilly Smith is shining now that he's finally getting a chance in the top six, while Cody Eakin has taken this team by storm with his reliable and energetic play. Brenden Dillon has been the biggest surprise of them all, improving with each game as he plays on the top pairing with Stephane Robidas. 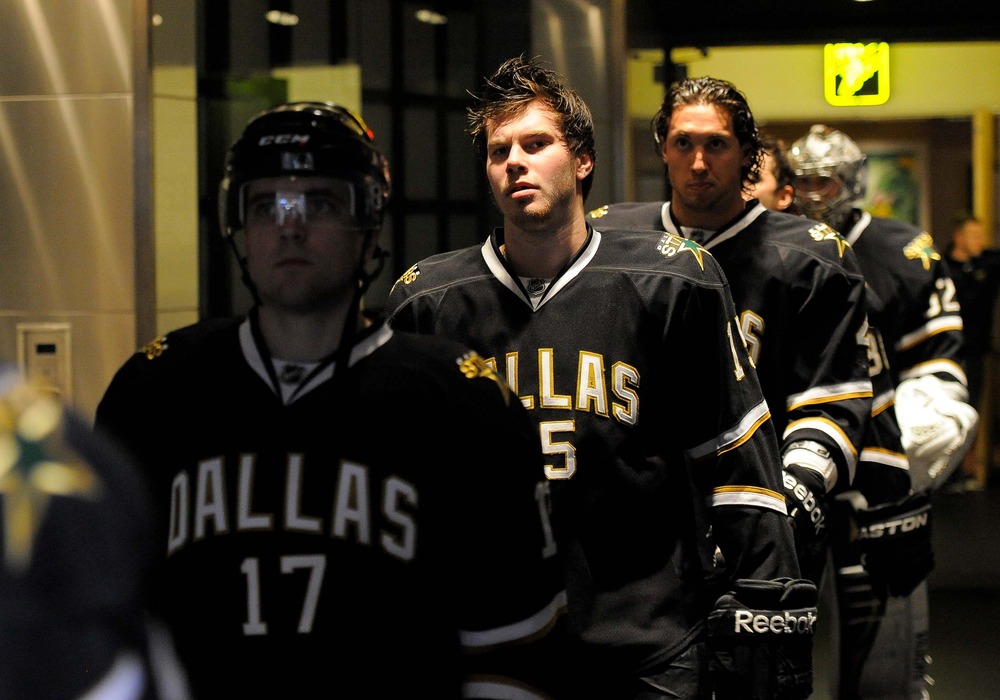 We take a look back at the drafting history of the Stars and the impact on the current team.

What's better is that there are a number of players we have yet to see in the NHL that will be playing prominent roles as well. Alex Chiasson, Patrik Nemeth and Jack Campbell have yet to make their NHL debuts, while Brett Ritchie, Matej Stransky, Emil Molin, Jyrkki Jokipakka and Radek Faksa are all expected to turn pro over the next two seasons. While Campbell's slow start to his pro career has been troubling, the young netminder is showing signs of improvement and consistency.

By his own admission, It's the first time Jack Campbell has had to ride the bench in his career and it's a completely different experience. He has shown well recently, keeping Texas in a few tight games despite some particularly ugly defensive breakdowns. His second shutout of the year last weekend was a solid reward for his work over the past month, where he has been called upon to be the starter again in Nilstorp's absence.

Now, there is no guarantee that these young and promising players will form the core of a Cup contending team. But they show that there is promise for an organization that never attempted to grow in this manner before, that the Stars no longer need to live and die one season at a time. This is a building process, one that will take longer than most want, but Stars fans are finally starting to see the fruits of all of the prospect trouble we've gone through the past few years.

For those of us that have so closely followed the development of these players, seeing Dillon, Smith and others scoring while wearing a Dallas Stars jersey is a payoff not experience in quite some time with this franchise.

The Stars still need to find a balance on the ice, with hopefully the young players continuing to grow and improve and filling even more prominent roles in the future. Building through the draft is not the only step in building a contender, but the developmental process of the Stars organization has formed the perfect framework for the Stars moving forward. This is a team that can now afford to go after complimentary free agents and make the moves worthwhile, with a promising core being put in place to build around.

We've been saying it for quite some time: "The future is bright in Dallas." Now, that future is slowing melding with the present and it's certainly exciting to get to watch.